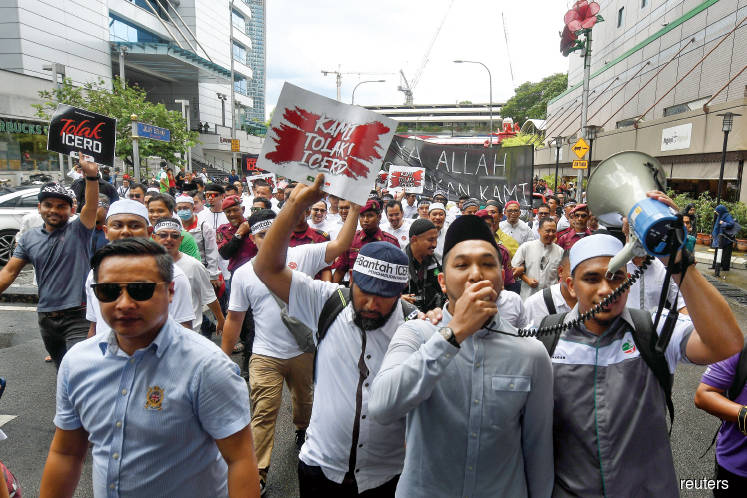 THE reason why the Bersih rallies went on until Bersih 5 was because the organisation’s demand for fair and clean elections was not met by the government of the day. Hence, the protests continued.

The Palestinians never let up on their intifada because Israel has not mended its ways.

It was the same case with the Umbrella Movement in Hong Kong. The civil disobedience movement had called on Beijing to introduce political and democratic reforms. As they saw it, their calls fell on deaf ears, so they staged demonstrations.

In a nutshell, protests are usually carried out when demands are not met and are thus justified.

But back home, apparently, we have our own interpretation of why protests and rallies should be conducted.

PAS, Umno and a coalition of Malay Muslim NGOs were up in arms against the government because of its initial intention to ratify the United Nations’ ICERD, or International Convention on the Elimination of All Forms of Racial Discrimination. As we know, they threatened that a million people would take to the streets. The government backtracked, saying it would not ratify ICERD. The anti-ICERD folks said alhamdulillah, but protested all the same.

By protesting against a government that had agreed to their demands, these groups have somehow given a new meaning to the word “protest” and its justification.

But wait a minute. They said the Dec 8 protest was not a protest but a thanksgiving event because the government had decided against ratifying ICERD. Yet, despite what the leaders were saying, the protestors came wearing tee-shirts and headbands with the words “Bantah” in bold. And (this is so clichéd) the last time I checked, “bantah” is Malay for protest.

So, thanksgiving or kesyukuran has a new meaning as well.

And it was not only ICERD they were protesting against or its non-ratification they were saying thanks for. There were angry words for the Pakatan Harapan government for pledges not met, including the PTPTN repayment moratorium,  which has been partially implemented.

And are they suggesting we have policies in place that discriminate against some people?

Hang on. They said it was about Malay rights or special privileges, the Malay rulers and Islam. Of course it is, and they warned everyone not to mess with the Malays. But heck, PAS deputy president Datuk Tuan Ibrahim Tuan Man is on record as saying, “We are not anti-Chinese or Indians”. Even former prime minister Datuk Seri Najib Razak could not resist turning up and remarking that “this is not about racism”.

Then there’s another thing. After the government had given the green light for the protest rally, thanksgiving or whatever you want to call it, PAS vice-president Idris Ahmad responded by telling Pakatan leaders not to prevent it from taking place. Maybe he missed the government’s nod for the protest despite the extensive media coverage, as well as the news being widely shared on social media.

I have to state this though — by saying it will not ratify ICERD, is the Pakatan Harapan government saying it is also now not supporting the elimination of racial discrimination?

I don’t think so. Lest I am accused of being a government apologist, I must state here that this is based on the remarks and actions of PAS and Umno leaders. They have been demanding all kinds of assurances and laying down conditions as well as threatening more protests if the government ratifies ICERD later.

In short, they do not believe the government made the decision because it shares their sentiments on the matter. They just do not trust the government.

After all, a majority of the rakyat, including those disappointed with the decision, feel it was made to cool things down because racial tension, as we know, had been building before that.

To DAP’s Lim Kit Siang, the decision was made to avoid another May 13 tragedy.

So, the Dec 8 rally went on as planned without hindrance.

It does not matter whether 50,000 people protested or one million turned up. Obviously, PAS and Umno are more than satisfied with how things played out. Some party members even went as far as to proclaim victory.

To political analyst Dr Sivamurugan Pandian, in politics, rallies can be seen as an indication of strength and in this case, Umno and PAS would want to claim that Malay Muslim support is still with them.

Says Siva, “Most of us know it’s impossible to amend the Federal Constitution on such issues because of the parliamentary process and the need for the consent of the Malay rulers, so this rally is important for PAS and Umno to show they still enjoy support post-May 9.”

This ties in with the strategy of both parties to drum in the message to the Malay Muslim community that the rulers, special privileges and Islam would be under threat should ICERD be ratified. Never mind that all these are protected by the constitution and ICERD will never override them.

I’ve always maintained that it’s about politics and the political survival of Umno and PAS.

Lending credence to my opinion are videos on social media of anti-ICERD rally participants who do not fully comprehend the issue. Surely, you must have seen such videos and know what I mean.

Yet, this is not to say that they were all duped. I must admit that many of them truly believe their bangsa dan agama were in danger.

Political observer Hishamudin Ubaidulla says that since the Iranian revolution in the 1970s, the discourse has changed from nationalism to religion. “Umno has mutated to keep up and form was emphasised, not substance,” he adds.

Now, as he sees it, “Umno and PAS wish to mould opinions using fear before Pakatan Harapan’s structural reforms provide benefits to the rural masses”.

Perhaps it was sheer coincidence that a day after I spoke to Hisham, I read a news report about Prime Minister Tun Dr Mahathir Mohamad telling Finance Minister Lim Guan Eng to help the “poor whose money had been stolen by the previous government”.

Mahathir admits the public has yet to benefit from the hard work put in by the government and they cannot grasp the facts and figures provided by the finance minister showing improved economic performance.

He said the rakyat will feel relieved next year, but “for the poor, they cannot wait. They are feeling the high cost of living”. As such, “we will help with what little that we have” although “we do not have much as we do not steal”.

Perhaps Mahathir was talking from a broader perspective and not just focusing on the anti-ICERD crowd.

Nevertheless, Hisham opines that for the government, “the best move would be to employ ringgit and sen on a needs-based approach rather than the present race-based one”.

But at the same time, as the anti-ICERD crowd is not about to go away anytime soon, he feels the best way forward is to engage them as “the common man cannot tell when he is being exploited”, hence “the only cure is to raise their consciousness”. Discourse, he stresses, will enlighten the people.

To the political observer, despite the laughable rhetoric of Umno supreme council member Datuk Seri Tajuddin Abdul Rahman, “he probably understands ICERD better than us. It is the stock in trade of politicians to misrepresent issues to achieve their own objectives. Therefore, never underestimate a politician’s ability to conflate issues. They know how to pitch”, Hisham says.

Still, he sees discourse on the issue and related topics already taking place among young Malays.

If I may add, as more young people discuss these issues, the likes of Tajuddin will have to work extra hard to convince their target audience. Expect more venom and more fear-mongering.

For Siva, the Pakatan Harapan administration should use the rally as a yardstick to gauge the situation, evaluate certain decisions it has made in the past six months and determine if there is any erosion in public support or if this is just perception or psych war by the enemy.

But Siva and Hisham agree that race and religion will continue to be a drawing card. Sad but true.

So, the question is will PAS and Umno cook up more rallies like Dec 8 in their effort to remain relevant, given their interpretation of protests and rallies?

“More rallies will not help them gain support because they must also win non-Malay support if they want to improve their electoral performance,” says Siva. I agree. As it is, both parties have only succeeded in hurting the feelings of the non-Malays.

Naturally, Siva’s take is based on logic. But when they are desperate, political parties tend to do things that defy logic and reasoning, even though the rakyat can see right through their antics.