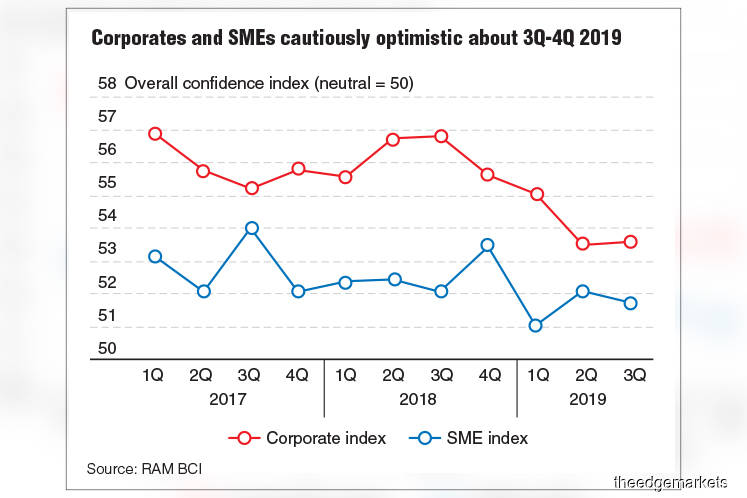 KUALA LUMPUR: The RAM Business Confidence Index (RAM BCI) for the third to fourth quarters (3Q-4Q) of 2019 indicates a rebound in the sentiment of export-oriented corporates in Malaysia.

RAM Holdings Bhd said the overall index for export-oriented corporates rose 2.1 points — the first uptick in the last three quarters and the biggest increase to date.

“At 57.9, the surge in optimism is mainly attributable to a steep spike in corporates’ turnover and profitability sub-indices (+7.2 points to 61.6 and +7.5 points to 61.6, respectively),” the rating agency said in a statement yesterday.

“Malaysia is one of the key beneficiaries of the ongoing US-China trade war, which has prompted the realignment of global supply chains away from China. A sample of our export-oriented survey respondents reported more orders, mostly from other Asian economies such as Thailand and South Korea,” it said.

However, despite more positive readings for export-oriented corporates, the overall RAM BCI still indicates a subdued level of optimism through the next six months.

RAM observed that the overall indices for both corporates as well as small and medium enterprises (SMEs) have only changed marginally from the last survey, at a respective 53.6 (+0.1 point) and 51.8 (-0.3 point).

“The cautiously optimistic sentiment is not surprising given the challenging operating environment, particularly amid the disruptions caused by the US-China trade tensions, Brexit complications and uncertainties amid a scenario of moderating global growth,” the rating agency said.

It said most firms still believe that the next six months will remain challenging, despite signs of trade diversion benefits.

“The heightened concern is reflected in the higher number of firms citing ‘weak economic conditions’ as their main challenge in the next six months. This proportion has risen to record highs of 43.1% for corporates and 44.8% for SMEs,” RAM added.

The RAM BCI is a survey jointly conducted by RAM Holdings and RAM Credit Information Sdn Bhd on business sentiment in Malaysia. Released quarterly, the index is based on data from a survey of close to 3,500 SMEs and corporates across five main industry segments respectively.

Meanwhile, a new HSBC survey shows that 80% of companies in Malaysia have a positive outlook for the near future and expect to grow in the next one to two years, in line with companies globally (79%).

Almost half of the Malaysian companies (48%) are more optimistic about their business outlook compared with a year ago, HSBC Malaysia said in a statement.

The HSBC’s “Navigator: Made for the Future” survey also revealed that innovation is a business enabler, with 34% of companies in Malaysia citing innovation as critical to their future success, which is considerably above the global average of 26%.

“Indeed, almost all (98%) of Malaysian businesses feel that innovation is important, in line with global findings. In Malaysia, there is a slight tilt in opinion with businesses seeing innovation as a growth engine (41%) rather than as a prerequisite for survival (36%),” HSBC said.

The survey covered more than 2,500 companies across 14 markets globally, including 200 from Malaysia.