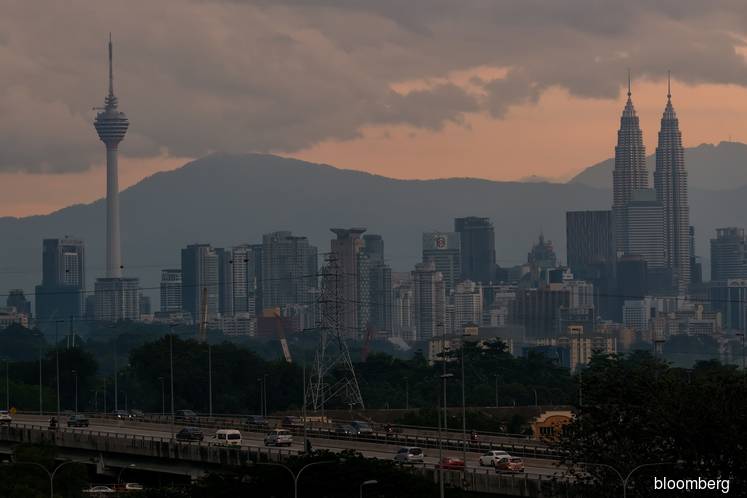 KUALA LUMPUR (April 21): A storm is brewing for Malaysian bonds, as the threat of an US$8 billion outflow and a falling ringgit erode sentiment, even in the face of a likely interest-rate cut.

The biggest rally in ringgit bonds in three years, fueled by bets for policy easing, has ground to a halt. FTSE Russell sparked the latest -- and perhaps biggest -- worry when it said last week it may remove Malaysia from its world bond index on concern about market liquidity, triggering fears of a capital flight.

The move couldn’t come at a worse time: the currency is lagging, global funds continue to sell Malaysian stocks and palm oil exports are under threat from European Union restrictions. While weak inflation data Wednesday could support the case for a rate cut, there are concerns consumer prices could rebound in the second half.

“The bond market may be in for some volatility, if speculation increases over the country’s potential exclusion of the World Government Bond Index,” said Anders Faergemann, a London-based senior money manager at Pinebridge Investments which oversees $90 billion. “We would not immediately step in to buy Malaysian local bonds in spite of rising prospects of a rate cut.”

The upcoming inflation report may offer clues on the timing of any interest-rate cut. If data show consumer prices fell for a third month in March, bond traders could position for an easing to take place as early as the next review on May 7.

“There is scope for Bank Negara Malaysia to initiate a cut in the second half, reversing the 25 basis points hike of early 2018,” said State Street Global Markets macro strategist Dwyfor Evans. “But no more, given fears over resurgent inflation and rate differentials.”

Inflation could soon rebound on higher oil prices, a weaker ringgit and base effects, he said.

The prospects of a rate cut, and a revival of emerging markets, drove the country’s three-year bonds to their best quarter since 2016. Yields though have climbed in April, now hovering about 25 basis points above the policy rate of 3.25%. Ten-year bond yields have also risen.

Mass Exodus
Investors are now bracing for an exodus in the event FTSE Russell does eliminate Malaysia from its World Government Bond Index in September. Outflows may total almost US$8 billion if the nation is dropped, according to Morgan Stanley estimates based on index weighting and tracking data from the International Monetary Fund.

Foreign holdings of Malaysian debt are already hovering near a two-year low. A massive withdrawal may also deal a knock-on blow to the nation’s equities, the world’s worst performing major stock market this year, given the historical correlation between local shares and the ringgit.

The ringgit has lost about 1.3% so far in April, the most among Asian currencies, as global funds continued to trim holdings of Malaysian equities after pulling almost US$3 billion last year.

Still, even the threat of capital outflows is unlikely to prompt radical action from Bank Negara to address market liquidity, after their prohibition on trading in non-deliverable forwards in 2016 and subsequent measures to allow hedging.

“It is unlikely that Bank Negara will change regulation drastically just because of this,” said Mingze Wu, a foreign-exchange trader at INTL FCStone Global Payments in Singapore. “If we do see changes in regulations, it won’t just be the FTSE downgrade being the main factor, but certainly it will nudge Bank Negara to the direction that market wants.”