Following the war, Glenlivet grew to become one of the world’s largest single malt distilleries — it is now the biggest selling single malt whisky in the United States and the second biggest globally.

The Glenlivet Winchester Collection is a series of 50-year-old single malt Scotch whiskies planned to be released over the next few years.

The collection inherited its name from the current master distiller Alan Winchester and represents the legacy of a generation of men whose unparalleled craft and skill created some of the rarest whiskies in the world.

The world’s first series of rare and precious 50-year-old single malt Scotch whiskies started life in the hands of Captain Bill Smith Grant, the latest in the long line of George Smith’s descendants.

Having passed through the caring hands of seven other master distillers, the first release called “Vintage 1964” made its debut in October 2014, limited to only 100 bottles.

Priced at the equivalent of US$25,000 (RM91,250), the Vintage 1964 showcases an exceptional whisky aged in American oak seasoned with Bourbon, intensifying with age. Ripe pears, oranges and black cherries create an intriguing flavour while smooth, creamy toffee notes give a rich, velvety texture.

It isn’t only the whisky that is one-of-a-kind; the packaging was designed by Scottish glass artists Nichola Burns and Brodie Nairn, with its decanter inspired by The Glenlivet’s colourful history.

Completing the decanter is a jewel-like stopper which was designed by acclaimed silversmith, Richard Fox who has worked on Formula One cars and Rolls Royce.

The design is a combination of precious metals such as rose gold and is crowned with a Cairngorm Stone.

On Friday (April 24), Bottle No 3 of Vintage 1964 from The Glenlivet Winchester Collection will be landing in Malaysia.

It is being sold through an online auction that will run for 50 days, and this rare whisky will find a home with the highest bidder.

This auction is only open to the Guardians of the Glenlivet — a global group of whisky lovers with access to exclusive privileges courtesy of The Glenlivet.

The Malaysian chapter is the largest whisky community in the country and was formed through a series of “taste and discover” events.

To become a Guardian and bid for this exquisite once-in-a-lifetime opportunity to own a bottle of a Vintage 64, contact Rachel at [email protected]. 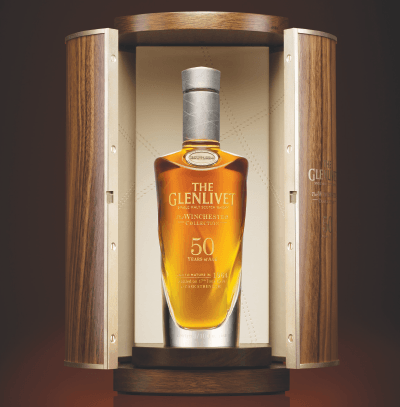