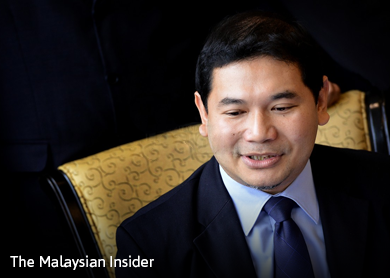 "It was presented during the meeting that 1MDB had cash flow problems and that the government had agreed to inject RM900 million," Rafizi told reporters at Parliament lobby today.

He added that the matter was revealed to him by one Umno division chief who attended the meeting.

According to the informant, said Rafizi, some RM300 million of the RM900 million have already been channeled to 1MDB, which is wholly owned by the Finance Ministry.

Rafizi said he was puzzled that the financial issues faced by 1MDB was brought up by the government during the meeting and also in Cabinet recently.

He added any speculation or reports of abuse must be investigated.

Petaling Jaya Utara Member of Parliament Tony Pua, who was also present at the media briefing, said a Singapore news report confirmed this morning that nearly RM1 billion loans were given to 1MDB.

Pua also questioned the legitimacy for the government to keep US$1.103 billion claimed by 1MDB, in a bank in Singapore.

There is no reason to keep the money in Singapore, unless 1MDB is trying to evade Bank Negara Malaysia (BNM), said Pua.

Najib had in a reply to an oral question to Pua, said that the balance of 1MDB's investments managed by Cayman Monetary Authority of US$1.103 billion has been redeemed in the form of cash and is still kept in US dollar currency in BSI Bank Limited Singapore (BSI Singapore).

The prime minister also said the decision to use a bank in Singapore was to facilitate withdrawal transactions, since approval is needed from BNM for every transaction conducted above RM50 million.

1MDB president and group executive director Arul Kanda Kandasamy was recently quoted as saying that the US$1.1 billion in funds would be needed for servicing interest payments on US dollar-denominated debts.

In an official statement by 1MDB issued last month (February), Arul Kanda confirmed 1MDB had redeemed in full, a US$2.318 billion investment in a Cayman Islands registered fund.