IN conjunction with the Asia GT race scheduled to take place at the Sepang International Circuit from Aug 14 to Aug 16, the Bentley Continental GT3 to be driven by Bentley Team Absolute is now being showcased at Bentley Kuala Lumpur’s iconic showroom at Pavilion Kuala Lumpur until the first week of February 2015, alongside the new Continental GT V8 S.

Bentley Motorsport announced its full schedule of races around the world for 2015 after a successful debut season for the racing version of Bentley’s iconic Continental GT grand tourer, the Continental GT3. 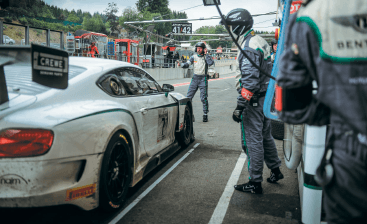 Building on the success of the 2014 season, which saw the Continental GT3 win three races on two continents and finish second overall in the Blancpain Endurance Series, the 2015 programme has been expanded to cover six race series over four continents.

Bentley’s Brian Gush says: “2015 promises to be a very exciting year as we grow our programme through customer teams to see the Continental GT3 facing fresh challenges at new tracks across the globe.

“This year will see the most extensive campaign of racing in Bentley’s illustrious history, as we continue to use the Continental GT to build on our racing heritage.

“Racing is in our blood, and with the Continental GT3 we continue to build on a winning tradition. Bentley customers are now going racing with their marque, in a Bentley, in race series around the world.”

“We are very pleased with how the car uses its tyres, and our traction at the start of every race has allowed us to take the lead.

“Importantly, we also scored the fastest lap, which bodes well for the future. With the data we’ve collected, we are expecting our competition with the Continental GT3 to be a success.”

Motor magazine TopGear reports that once Bentley went racing with the Continental — and successfully too — the shout went up: “Where’s the GT3 road car?”

The Bentley Continental GT3-R was unveiled at the Goodwood Festival of Speed in June last year.

TopGear says like the racer, it’s propelled by a 4-litre twin-turbo V8, in this case the one from the existing road car, but fattened up to a most healthy 580bhp (brake horsepower), with actual new turbos

Absolute Racing was founded by Fabien Fior and Ingo Matter in 2010, leveraging extensive European racing pedigrees and bringing over 20 years of Asian and European racing experience to the team. Absolute Racing has since grown to be recognised as one of the most successful teams in Asia. The extended team is a collection of professionals who rank among the most highly-respected in the industry. A base at the Sepang F1 Circuit in Malaysia complements its headquarters in Zhuhai, China. 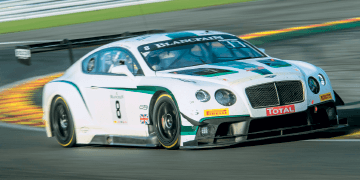