The quick and quiet rise of RM2 stores 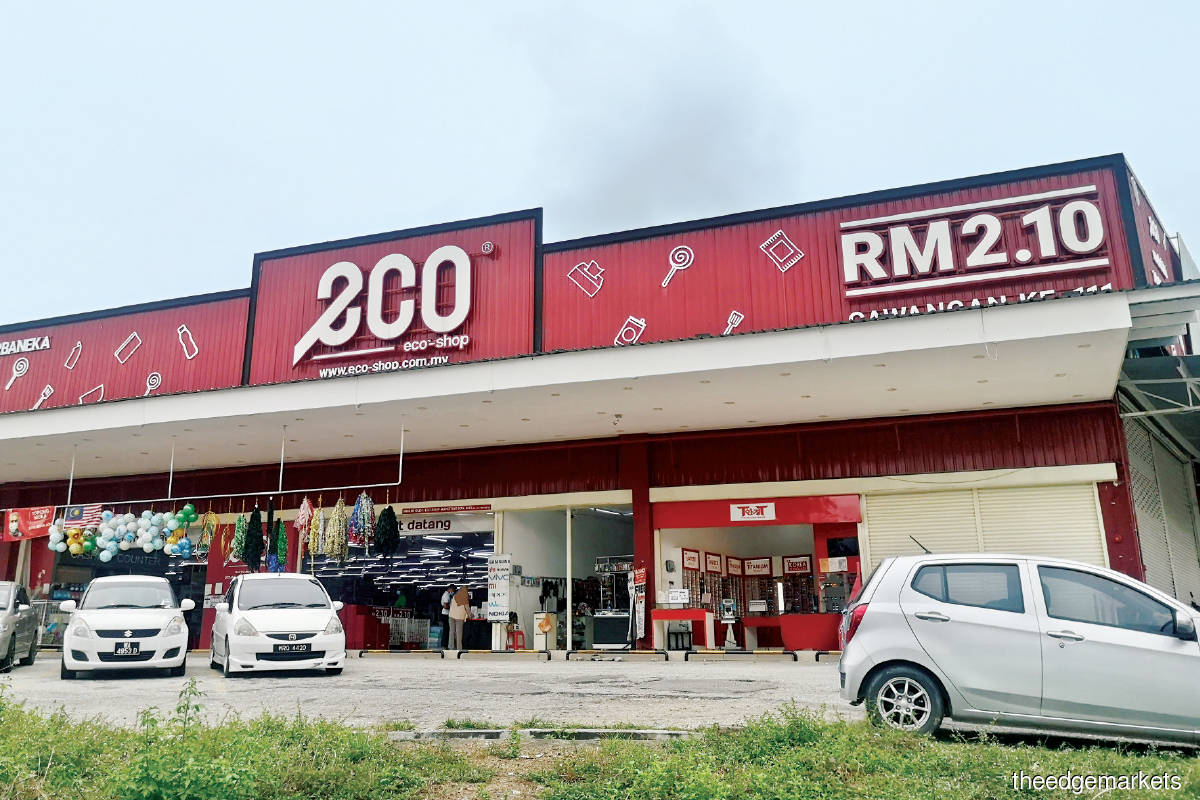 The oldest player in the market, Eco-Shop, is embarking on an expansion plan to strengthen its position. (Photo by Mohd Izwan Mohd Nazam/The Edge)

A number of businesses have had to close down amid an extremely tough operating environment, but a particular category of stores has been seeing growing demand in Malaysia. Popularly known as RM2 stores, they have been gaining prominence and their sales are projected to continue on an upward trajectory.

Eco-Shop, Zon Jimat, Ninso, Super Jimat, Noko, Setia, NT Shop, Cheap2shop, Mr Save and Mr Dollar are some of the brands in this segment (see table).

The oldest player in the market, Eco-Shop, is also the largest with over 150 stores.

The newest, Mr Dollar, has five stores but is embarking on an aggressive expansion drive and plans to open as many as 50 stores next year (see sidebar). The Edge understands that Eco-Shop aims to do the same to strengthen its position.

Why are these retailers expanding? Is the current uncertain economic outlook as well as salary and job cuts contributing to their popularity?

Savills Malaysia associate director and head of retail services Murli Menon tells The Edge that their popularity is not just confined to Malaysia. “This has been a growing trend not just here but globally as well. There has been a huge growth in this category of stores in the US and other parts of the world, especially in the last 12 to 24 months, and this has happened quietly and below the radar,” he says.

“This seems to be a trend that will continue to grow as people gravitate towards [purchasing goods that offer] better value for money, more so in the current economic environment where everyone has been hit in some form or other,” Menon adds. “There is a strong tendency to be thrifty wherever possible,” he says. Apart from economic reasons, he cites the convenience factor for spurring the growth of these outlets. “They have a wide array of goods, which makes it convenient for smaller purchases, quick pick-up of souvenirs or last-minute purchases.”

Retail Group Malaysia managing director Tan Hai Hsin observes that while “many of these players started by catering for budget-conscious consumer, today, they are attracting all income, racial and age groups”.

“There are always some household items, plastic ware, kitchenware, stationery, toys and decorative items that you do not want to spend too much on. Also available are packaged food, snacks and beverages,” he says of these stores, which are also referred to as fixed-price, low-priced, general merchandise or discount stores.

Describing the evolution of domestic consumer shopping habits, Tan explains that before the arrival of hypermarkets in Malaysia, consumers purchased their clothes, toys and household goods from department stores. Then, in the late 1990s and the 2000s — when wholesalers such as Makro Cash & Carry and hypermarket operators like Carrefour, Giant and Tesco entered the country and expanded their business chains — consumers began patronising the hypermarkets. “They realised that the [non-branded] items in hypermarkets were cheaper than the products in department stores,” Tan says.

Generally, people do not buy branded items for use in their homes, he points out. “You do not need to buy branded stationery and toys for your children.”

The next shift in the 2010s saw consumers gravitating to Eco-Shop, Mr DIY and similar shops because the goods there were even cheaper than those in hypermarkets.

For this reason, Tan expects RM2 stores to continue expanding. “They will remain popular in the future, and not only because of the current job losses and decline in purchasing power.”

Apart from competing with each other, RM2 stores also have to contend with different retail segments, among which are the non-single-priced chains.

Such businesses, which are growing in numbers and popularity, include Mr DIY, Maxvalue Ringgit Store and FNC. There is also SuperSave, which has stores located in shopoffices and malls such as IOI City Mall and AEON Mall Nilai, and 2N, which operates over 100 stores and has the tagline “Near & Nice”.

Other retail segments include hypermarkets, department stores and general merchandise stores such as Yubiso, Miniso, Daiso and Komonoya. Then there are the home furnishing businesses, convenience stores and sundry shops that can be found in almost every corner.

Although RM2 stores can be distinguished from Mr DIY and Daiso in terms of their product pricing and range — Mr DIY offers more variety at different prices while Daiso sells most of its products at RM5.90 each —there will inevitably be some overlap, says Tan.

“You can buy the same food container at Mr Dollar at RM5, Daiso at RM5.90 and Mr DIY at another price,” he points out.

Menon agrees. “There will always be some level of overlap when you have this category (RM2 stores) expanding rapidly. Part of the attraction is the wide variety of items offered and many such stores are even offering more food items and, in a way, are becoming mini grocery stores of sorts.” For example, 70% of Mr Dollar’s products are food-related.

Adding to the challenge are the thin margins. “Not all fixed-price stores will survive in the future. This trade has an extremely low profit margin. If they do not attract sufficient crowds, they will not survive. Merchandising mix and cost control are critical success factors for this business,” Tan cautions.

Consumers are not shy to buy cheap

In the initial stages, the RM2 or dollar stores took off in low catchment and rural areas. But Menon says these outlets, which typically measure between 4,000 and 7,000 sq ft — depending on the catchment area — are now expanding beyond the rural areas and moving into urban locations as shopping trends are changing.

“People are not shy or embarrassed to shop ‘low’. It is more about shopping wisely and looking for better deals and offers, especially for low-involvement items,” he says, referring to products that buyers generally give less thought to and are often impulse buys.

Menon says the entry of Mr DIY Group (M) Bhd into the RM2 store business via Mr Dollar is expected to lead to such stores mushrooming in malls.

It is already happening: RM2 store Noko opened in Sunway Putra Mall in Kuala Lumpur in September and is doing so well that it is expected to expand to other Sunway group malls.

Sunway Malls & Theme Parks CEO HC Chan says the response has been very encouraging and has surpassed expectations as consumers have been quick to accept the value-retailing format.

“Apart from appealing price points, the extensive range of merchandise has also been pivotal,” Chan tells The Edge. “We are in advanced stages of talks to have two more stores across Sunway malls, bringing the tally to three.” Interestingly, RM2 stores are also bringing more footfall to the malls. “Stores of such nature are certainly crowd-pullers since they cater for a [wider segment of consumers],” Chan says, adding that they have helped to marginally fill the gap left by cinemagoers, who used to account for 6% to 13% of the group’s mall traffic.

Tan agrees that RM2 stores can be crowd-pullers but does not see them as “drivers” for the malls, given that their spillover effect on other stores is limited. Private-equity firm Creador, which has invested in retail businesses such as Bonia Corp Bhd, Bake with Yen and Mr DIY Group (M) Bhd, also holds a tenth of Eco-Shop Marketing Sdn Bhd, the owner and operator of the Eco-Shop chain that retails all of its products at RM2.10.

Creador founder and CEO Brahmal Vasudevan tells The Edge that the PE fund ventured into the business in the middle of last year after it saw how well the store was performing and realised its business model had potential. “I made a visit to the store in Selayang one afternoon at 2.30pm and was surprised to see how crowded the store was, even at that hour,” he says, noting about half the items on the shelves were food.

Brahmal concedes he found the model and idea of Eco-Shop fascinating, as it targeted the B40 group and just about anyone looking for food and goods at a very affordable price. His experience with Mr DIY told him there was growth potential in the business. At the time of Creador’s entry into Eco-Shop, there were some 100 stores. Today, its 158 stores allows it to maintain its pole position while widening the gap between itself and its closest competitor, Zon Jimat, which has 55 stores.

A search on the Companies Commission of Malaysia website reveals that the company was incorporated in 2006.

Founded in the town of Jementah, in the district of Segamat, Johor, Eco-Shop describes itself as engaged in the business of retailing of groceries, general consumer goods and a wholesaler of rice, oil, flour and sugar. It also provides transportation.

Its biggest shareholder is Datuk Sri Lee Kar Whatt, who owns 80.28% of the company, followed by Agathis Montana Sdn Bhd, with a 10% stake.

There is no publicly available historical performance data on Eco-Shop, as it is an exempt private company, although it is learnt that this oldest and largest RM2 chain rakes in more than RM1 billion in annual sales. Looking ahead, however, the company is likely to have to disclose share performance figures, as it now has corporate shareholders. (An exempt private company has to be solvent and not have more than 20 individuals as its shareholders.)

It is noteworthy that, in August, newly listed Mr DIY Group (M) Bhd, in which Creador holds a 15.3% stake, ventured into a similar business called Mr Dollar. Mr DIY CEO Adrian Ong tells The Edge that its the number of Mr Dollar stores will be doubled to 10 by year-end. “The target is to open 50 stores next year,” he says, adding that the openings will be in small towns, as well as suburban and residential areas.

Mr Dollar’s range of items retails from RM2 to RM5, and about 70% are food items.

Ong says Mr Dollar’s performance has been encouraging and margins, at its infancy, are “in the mid-20%”.

The potential for growth is good if the performance of similar, listed established brands are anything to go by. Based on the latest quarterly results, US-based Dollar Tree registered a gross margin and net margin of 29.95% and 3.61% respectively, while for Dollar General, it was 31.17% and 7.48% respectively.

Canada-based Dollarama enjoys much fatter margins of 43.88% and 14.06% respectively.

Brahmal says he would not discount the possibility of listing Eco-Shop’s retail business in the future.