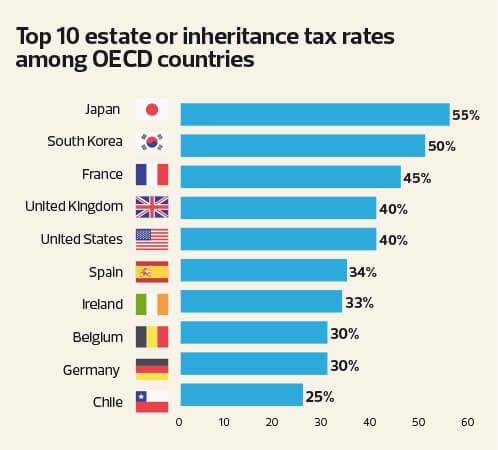 TALK of a new tax called the inheritance tax being introduced in Budget 2018 surfaced a week or two ago.

This was quickly put to bed by Second Finance Minister Datuk Seri Johari Abdul Ghani, who said it was “unfounded rumours”.

For those in the tax fraternity, this is not the first time they have heard of such talk. Rumours that the government would introduce such a tax first emerged last year.

However, this time around, unconfirmed messages circulating on social media stated that it would be implemented at a rate of 10%.

What is inheritance tax? Sometimes known as death tax, it is basically a tax on the estate — be it property, money or possessions — of someone who has died.

Many might not know that the tax was once imposed in Malaysia under the Estate Duty Enactment 1941, which was repealed on Nov 1, 1991.

At the time, estate duty was charged at scale rates of 0%, 5% and 10%. It was not applicable to estates with a value below RM2 million, while the highest tax rate of 10% applied to estates valued at over RM4 million, according to a June 1 article by Labuan International Business and Finance Centre.

As to why it was repealed in 1991, some tax consultants say it was because the revenue collected was low, given that the duty was only applicable to a specific threshold and when a person dies.

Inheritance tax around the world

The tax is usually found in developed nations. The highest rate among the Organisation for Economic Co-operation and Development countries is Japan’s, at a whopping 55%, while Italy has the lowest rate at 4%. There are 15 countries within the OECD that do not impose it on assets passed on to direct heirs.

But inheritance tax, which is designed to tax the wealthy and reduce the inequality gap, comes with its own set of problems. In the UK, it is applicable to estates with a value of above £325,000 at a rate of 40%.

Of course, there are situations where the tax would not apply, that is when the estate is left entirely to the spouse or civil partner, or when everything is left to charity.

However, property prices in the UK have skyrocketed over the last decade, with the average price in the cities now above £325,000. This means that those from the middle-income group are actually the ones feeling the pinch, rather than the wealthy.

Thankfully for Britons, new rules were introduced this year that relieve many of inheritance tax. A new allowance of £100,000 has been made available to individuals to offset the sale of a family home on death. This is in addition to the existing £325,000 exemption.

According to British newspapers, this new allowance starts at £100,000 and will be increased each year until it reaches £175,000 in 2020. This means that an individual can potentially pass on wealth of up to £1 million without incurring tax.

Should Malaysia reintroduce the death tax?

The thought of having to pay more taxes is enough to get any Malaysian riled up these days. Interestingly, some parties take the view that inheritance tax should be reintroduced in Malaysia to bridge the gap between the rich and the poor.

The Consumers Association of Penang (CAP) is among those in favour of its reintroduction, saying it hopes the tax will be addressed in the upcoming Budget 2018.

“Implemented properly, inheritance tax as well as other relevant forms of taxation, such as wealth tax, capital gains tax and gift tax, provide important revenue for state coffers from the highly rich, and not from those in the lower income brackets.

“Inheritance tax, similar to estate duty or estate tax, is assessed on the net worth of an individual at death. Not all estates are subject to the tax. Only those of and above a certain value are included,” CAP said in a statement last Tuesday.

The association remarked that the best way to tackle wealth inequality was through taxation, especially inheritance tax.

Axcelasia Taxand Sdn Bhd group executive chairman Veerinderjeet Singh points out that for a country like Malaysia, which is a capital importer and still relies on foreign investments to drive the local economy, it may not be appropriate to introduce such a tax.

“An alternative argument against this (inheritance tax) is that the income from an asset is taxable and a tax is imposed when you acquire a property (stamp duty) and when you sell a property (Real Property Gains Tax). So, why do we need a duty or tax to be imposed on death?” he asks.

“One can argue that there is no sale or purchase of the asset. So, in reality, there is no transaction involved,” he tells The Edge in an email reply.

“Alternatively, the tax could be imposed on income and on capital, be it the sale of a capital asset or a deemed transfer. So, one has to set the benchmark on what should be taxed and why and then move on to design the relevant tax. A developed nation would likely have all the relevant taxes,” says Veerinderjeet.

Dr Yeah Kim Leng, Professor of Economics at Sunway University Business School in Sunway University, concurs, saying it is not necessary for Malaysia to impose inheritance tax given that the tax revenue sources are currently adequate.

He deems the current tax level to be reasonable, based on the country’s phase of development.

“Inheritance tax is a way to diversify revenue sources for a country. Mature economies around the world have inheritance tax as a way to boost spending and to reduce income inequality.

“These societies place a greater emphasis on equality, but people will find ways to reduce these taxes they potentially have to pay. At this juncture, I don’t think there is a need for it in Malaysia,” says Yeah.

Instead of looking for new revenue streams, he opines that the first order of business should be to rein back government spending and reduce wastage.

“We should focus on spending efficiency and look at how we can reduce additional spending in the country,” Yeah remarks.