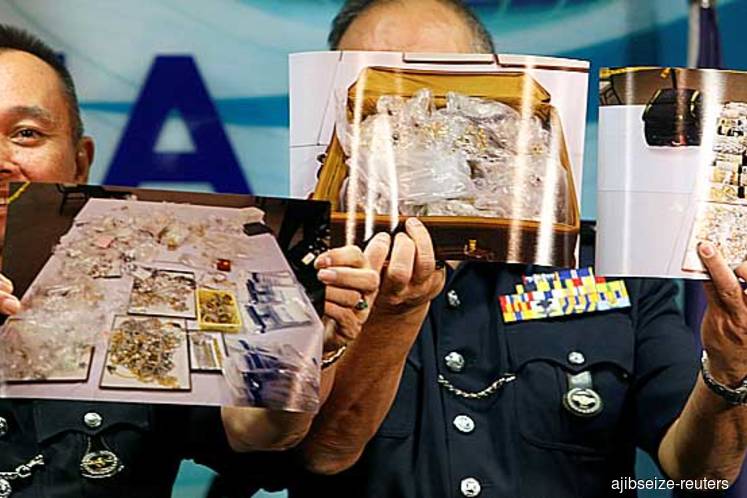 KUALA LUMPUR (May 8): The Government and the police have filed a civil forfeiture suit against former premier Datuk Seri Najib Razak, his wife Datin Seri Rosmah Mansor and several others in relation to jewellery, cash, handbags and luxury vehicles said to have been bought using 1Malaysia Development Bhd (1MDB) funds.

This follows two notices of motion and supporting affidavits filed at the High Court yesterday to seize a total of RM711 million worth of items from these individuals.

Sources told theedgemarkets.com the action was a follow-up to the seizure of the valuables by police last year at properties within the Bukit Bintang area and other places, after Pakatan Harapan won the 14th general election last May 9.

It is understood that police action by the Bukit Aman Special Investigation Division of the Anti-Money-Laundering Team was assisted by the Malaysian Anti-Corruption Commission in the operation and investigations.

Investigations into the money-laundering allegations in this case was done by Supt Foo Wei Min.

theedgemarkets.com understands that the first notice of motion filed yesterday is to seize a property in the Klang Valley, cash (including foreign currencies), jewellery, handbags, watches and sunglasses said to be worth RM680 million.

The second notice of motion is to seize RM31 million worth of items, including 27 luxury cars, cash (including in foreign currencies), 29 bank accounts, as well as more watches and bags.

The sources said Foo affirmed an affidavit in support of the forfeiture action as he is the investigating officer in the case. It is not known when the application would be heard but it may take as long as a month.

The court action comes on the back of yesterday's announcement by Attorney General Tommy Thomas that the US government has agreed to return US$57.04 million (RM233.7 million) that it seized from Red Granite Pictures, a US-based film production company linked to Najib and his stepson Riza Aziz that allegedly used stolen 1MDB funds to finance films.

The Government had also seized fugitive businessman Low Taek Jho's luxury yacht Equanimity and had recently sold it off for US$126 million.

Last year it was reported that the police mounted an operation and raided several luxury condominiums in Bukit Bintang and other places to retrieve various valuables.

The commercial crime investigation director at the time, Datuk Seri Amar Singh, told the media a month after the seizure that the items confiscated included cash in 26 currencies, 12,000 pieces of jewellery, 284 handbags, 423 watches and 234 sunglasses, which were valued at between RM900 million and RM1.1 billion.

The 234 sunglasses, of various brands including Gucci, Versace and Cartier, alone were estimated to be worth some RM374,000, while the total amount of cash seized stood at RM116.7 million, according to Amar.

The civil forfeiture action filed yesterday comes less than a year after the items were confiscated.

Under Section 52A of the Anti-Money Laundering, Anti-Terrorism Financing and Proceeds of Unlawful Activities Act 2001, a seizure order made under the Act will cease to have effect after the expiration of 12 months from the date of the seizure order. If there is a prior freezing order, the 12 months will run from the date of the freezing order, if the person against whom the order was made has not been charged with an offence under the Act.

The 12-month deadline in this case falls on May 16.

Umno had made a claim for the RM116.7 million that was seized but High Court Justice Datuk Nik Hasmat Nik Mohamed struck out the claim on March 22.