As expected, an interim dividend per share (DPS) of 24 sen was declared (1HFY14: 23 sen), in line with its historical trend.

As for asset quality, it should remain stable in 2015 as banks continue to seek out new, creditworthy customers.

However, we believe that there will be an upcycle in credit cost given that most of the bad legacy business loans have already been restructured or recovered last year.

On the other hand, net interest margin (NIM) pressure is likely to persist on the back of stiff price-based competition for loans and deposits.

Loans and deposits both grew 12%. In turn, LDR was relatively unchanged at 88%. Note that its loans growth was ahead of both our estimate and management target of 10%.

Return on equity dipped 3% to 17%, in line with our and management expectations.

Common Equity Tier 1 and total capital ratios expanded 1% to 2%. This can be attributed to the capital raising exercise from last year.

Since Public Bank’s 1HFY15 results is in line with expectations, we make no changes to our FY15 and FY16 estimated earnings of RM4.78 billion and RM4.99 billion. — Kenanga Research, July 31 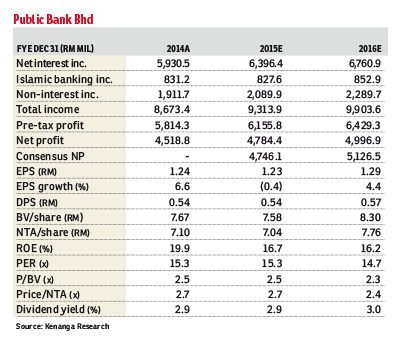