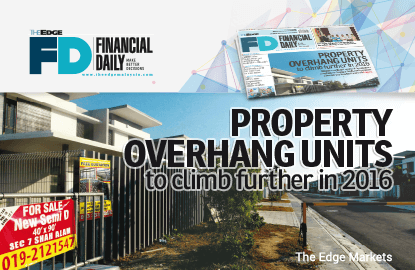 This article first appeared in The Edge Financial Daily, on April 20, 2016.

PUTRAJAYA: Malaysia’s property overhang units will continue to increase in 2016, but the quantum would not be severe if developers slow down on launching high-end property projects.

“We foresee that if the market continues to propose a lot of high-end properties, it may cause [a] slow take-up rate, and this may result in the increase of unsold units,” Deputy Finance Minister Datuk Chua Tee Yong told reporters in conjunction with the release of the 2015 property market report by the National Property Information Centre (Napic) yesterday.

“As such, based on the data provided and the indication of consumer sentiment, most of the developers have started switching towards affordable houses, which are RM500,000 and below, so we remain positive and we hope that the amount, while it increases, it would not be a significant increase,” he added.

Commenting on blaming the prudent lending policy for the hard-hit local property market, Chua noted that the mortgage loan approval ratio had not been falling drastically last year.

When asked about the property “mismatch” situation in Malaysia, Chua opined that the rising building costs and land prices have added to property prices, which are beyond the affordability of many first-time homebuyers.

He said the government is obliged to look into this gap either by cultivating growth of a citizen’s income, or by having schemes to assist.