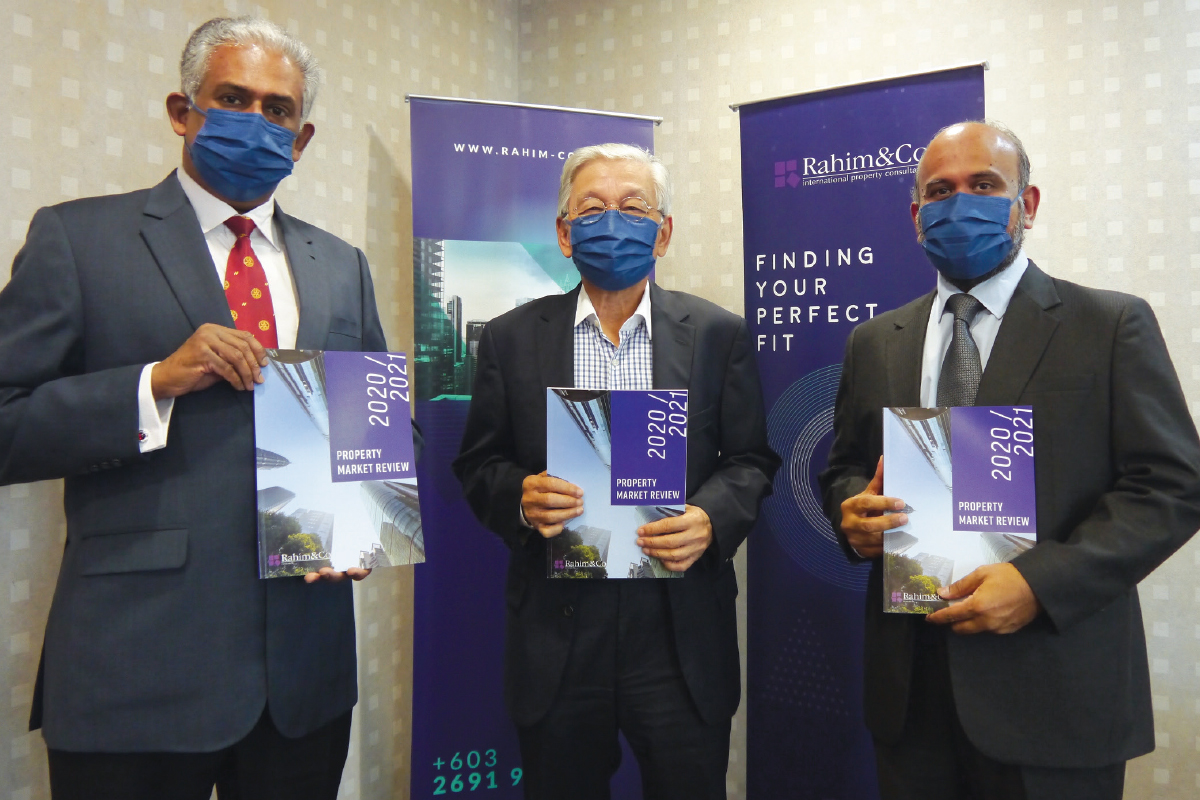 The local property market is expected to be soft this year and likely to see a further delay in recovery to 2022, according to Rahim & Co in its Property Market Review 2020/2021.

While there is optimism that the turning point will be in the latter part of 2021 with the vaccine about to be mobilised, a further delay in recovery to 2022 would not be a surprise with the recent resurgence of Covid-19 cases and reimplementation of lockdowns, it said.

“We expect the residential market to remain focused on the affordable segment as overhang is still a concern. Secondary sales are expected to dominate the market with price consolidation, and the Home Ownership Campaign 2021 will give the market a boost,” said research director Sulaiman Saheh during a virtual press conference on Jan 26.

In the office market, concerns about incoming supply remain. Rents and occupancy rates will continue to be under pressure, influenced primarily by relocations rather than new tenancies.

“Older buildings are looking at asset enhancement exercises or even being repurposed, while co-working spaces will continue to expand, especially in transit-oriented developments,” said Sulaiman.

Meanwhile, the retail sector will face more challenges and retailers are expected to re-strategise to offer better value and experiential retail options. E-commerce trends and synergies with bricks-and-mortar outlets will continue. And as the popularity of e-wallets grows, a cashless society is emerging, said Rahim & Co. Sulaiman noted that the industrial sector is attracting more attention than others at the moment. The sector will continue to be driven by the logistics sector and there will be demand for large warehousing facilities with built-to-suit arrangements.

“The advancement of technology through Industrial Revolution 4.0 will shape new forms of industrial parks, and managed industrial parks are the preferred choice. There is relatively low incoming supply and yields are relatively more attractive as investment assets,” said Sulaiman.

The consultancy noted that, despite having decreased by 29.8% and 11.1% in volume and value of transactions respectively in the first three quarters of 2020, the industrial sector was still seen as the more stable sector. This is boosted by the overwhelming demand for e-commerce transactions, which will continue to be in the spotlight. Considering the slower relative pace of incoming supply, especially for managed industrial parks with built-to-suit arrangements, industrial property investments are to be keenly observed this year.

The pandemic has stunted GDP growth, but Rahim & Co is maintaining a resilient outlook for the coming years as the world gradually readjusts itself. At end-2020, GDP growth was forecast to contract by 4.5%. But with the production of vaccines and having survived the initial pandemic shock, 2021 held a better recovery forecast of 6.5% to 7.5%.

“However, the numbers are due to the low base in 2020. The projected growth may look encouraging but because of the drop in 2020, the absolute figure is still comparable with pre-2019 levels,” said Sulaiman. Rahim & Co noted that in the first nine months of 2020, the residential sector saw a decline of 14.3% in volume and 14.8% in value despite an improved year-on-year performance in 3Q2020 when the country entered the Recovery Movement Control Order (RMCO) phase.

“Progress in housing developments was disrupted and ultimately caused delays in completion targets, resulting in completion numbers to be 33.4% lower (at 64,080 units) than the previous period. In addition, overhang numbers grew 14.8% to 57,390 units worth RM42.49 billion of dwelling units (residential, serviced apartment and SoHo combined). While this may be due to the pandemic’s effect, the persisting overhang numbers is evident of a problem that has yet to be tackled effectively,” it said.

“Unless we get to the root cause, we will never solve this problem. Right now, more properties are being built. An in-depth study should be done and permanent solutions to solve this issue should be looked at,” said its Petaling Jaya office director Choy Yue Kwong.

Executive chairman Tan Sri Abdul Rahim Abdul Rahman added, “According to statistics, there is still a shortage of about one million houses in Malaysia. So I believe there is a mismatch in pricing and type of housing. A problem is that land is a state matter, so every state should look at the availability of affordable housing and its problems.”

Sulaiman suggested measures such as banks appointing consultants to do reports before approving loans for developers instead of depending on developers’ reports, which can be slightly biased.

“While we do not agree with the vacancy tax that was talked about last year, an unsold-property tax can be considered, similar to the one used in Singapore. Developers who are unable to sell a certain number of units within a number of years would be penalised with additional levies or penalties,” he said.

Sulaiman believes, however, that it would be unfair to impose any measures in the current situation. “We do not want to disrupt the property market in these fragile times.”

The office market saw effective occupancy rates decline, especially during the MCO as remote working became the norm. CEO of real estate agency at Rahim & Co Siva Shanker says, “The occupancy rate is now around the 70% bracket, which is probably the lowest we have seen in a long time. Remote working is expected to add further pressure on office space, but the saving grace is that there has been no exodus in the market. As supply exceeds demand, there will be some pressure on rents, but I don’t believe we will see a crash in rents.

“As the vaccine rollout begins, remote working will be reduced and people will start coming back to the office. Office space will still have a role to play.”

However, he cautioned that, as medical professionals have reiterated, the vaccine is not a silver bullet. “It will not cure all the ills faced by the property market. Oversupply of office space and residential overhang were here long before we even heard of Covid-19.”

Pandemic aside, pre-existing issues such as lack of affordability, oversupply, income levels and cost of living need to be dealt with effectively and holistically to ensure the sustainability of the local property market, said Rahim & Co.