Profile: A recipe for success 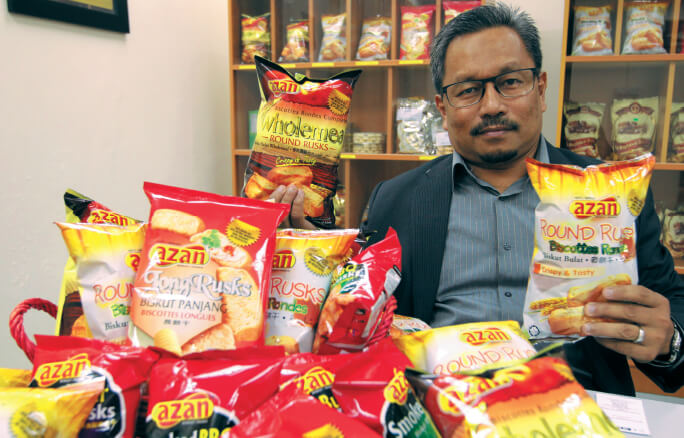 According to Mohd Ghazali, the rusks are very popular and have garnered a nationwide following 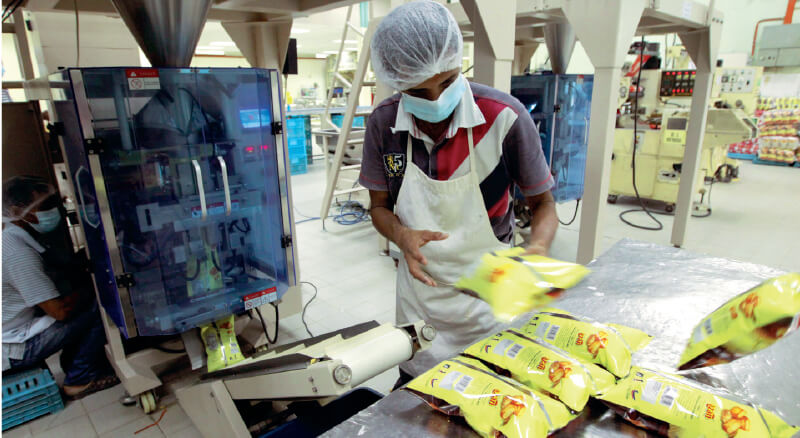 A worker packing the rusks ... the company now has 30 staff and a host of modern machinery at its factory

Perusahaan Azan Sdn Bhd did not get off to a good start. When its founder, Abu Bakar Ali, first tried his hand at making soy sauce, or kicap, he failed spectacularly.

A former soldier in the British army when it was stationed in Singapore, he was at a loose end when he retired. He had some savings and a pension from the army, but it was not enough to support his parents, wife and 12 children.

So, when he retired he decided to go into business for himself in his village, Kampong Baru Kuala Jemapoh in Kuala Pilah, Negeri Sembilan.

His son, Mohd Ghazali Abu Bakar, recalls, “My father tried making kicap at a friend’s suggestion. His friends, who served in the army with him, had taught him how. But it did not take off because we did not know anything about preservatives and the kicap would either spoil or the bottom would explode before we could sell most of it. Sometimes the bottles would explode in the shop.”

They used to make kicap in an open shed near their kampong house. The whole family was involved in the production. They would steam the soy beans, crush them and store the liquid in a large crock pot. These pots would be opened daily and exposed to sunlight to ferment the sauce.

This was not a fool-proof process because rats and lizards would often fall into the pots. They would not know until they came to filter the sauce. But they would sell the rat or lizard-infused concoction anyway; it was a common practice at the time.

They would also collect old glass bottles from the nearby sundry shops, wash them out and reuse them for the kicap. “If people had known how we made kicap, they wouldn’t have bought it,” laughs Mohd Ghazali.

So, inevitably the business failed and Abu Bakar looked around for something else to do. A friend of his, who had also served in the army, suggested that he make bread instead.

Unlike the kicap business, where they were basically operating in the dark, his friend actually knew how to make bread, having worked in the army bakery. But they were still in a kampong and had no access to electricity at the time. So, they used a wood-fired oven that they had built themselves. For yeast, they used fermented potatoes.

Initially, their baking venture looked to go the way of their kicap. Fermented potatoes were not effective as yeast and the bread did not rise well. Also, the homemade oven was less than perfect, and did not produce enough heat to bake the bread properly.

Abu Bakar had just had about enough and was ready to throw in the towel when an Indian Muslim seller of baked goods, called Jamaluddin (Mohd Ghazali cannot remember his second name), stepped in. “We knew him only as Jamal and he was the roti (bread) man in our kampong. He volunteered to teach my father how to make the bread properly. I think he was an answer to a prayer,” says Mohd Ghazali.

This was the turning point. The family adopted Jamal’s suggestions and by that time too, electricity had been introduced in the village. Jamal then encouraged them to buy a machine that could hold about 100kg of flour.

“That was our first electric mixer. We still have it in our current factory,” says Mohd Ghazali.

Jamal was also generous with recipes. He gave Abu Bakar a recipe for bread and the rusk. These recipes have stood the test of time and the family still uses them to this day in their modern facility in Kuala Pilah. Jamal the roti man continued to sell the family’s products until 2008, when he passed away at 65.

The family business started to pick up and their rusk, especially, became popular in the kampong and also the nearby town. By 1969, they started distributing their baked goods to most of the retailers in Kuala Pilah, Jelebu and Seremban.

In 1970, Abu Bakar formally registered the company, naming it Perusahaan Azan Sdn Bhd. It soon received an offer from the state government to move its factory from the shed outside their kampong house to the town nearby.

There is a story behind that. “The menteri besar at the time, Datuk Mansor Othman, had been my father’s schoolmate. When he heard that my father was baking bread in the village, he came to see my father, and told him that if he continued to run the business from the village, it would never go anywhere. He advised my father to move the factory to town.”

Perusahaan Azan formed a joint venture with the Negeri Sembilan state economic development corporation, and the factory was designed and built by the Public Works Department. The factory barely broke even for 10 years and did not make enough to recover its initial capital outlay.

In 1980, Abu Bakar decided that enough was enough. He took a RM300,000 loan and bought the government’s share. Then, he proceeded to turn around the company, putting into place proper marketing strategies, establishing a proper network and finding his own market and clients.

Business picked up and the company was doing well. By 1985, Abu Bakar, who was 59, was ready to retire. Two years later, he officially handed over the reins to his son, who became managing director. Mohd Ghazali had worked as a quantity surveyor for Tan Sri Azizi Wan Hamzah, the general manager of Peremba Bhd in Kuala Lumpur, for two years after graduating.

His re-entry into the company signalled a number of changes. For one, he invested heavily in modernising the bakery. He imported special machines from Germany to accommodate the rising demand. He also decided to cut down on the company’s product line and concentrate on just producing rusks, which last longer than ordinary bread.

“We use nitrogen as an agent to extend the lifespan of the rusk. Our rusks can last up to 14 months, so we are able to export this product,” he says. Today, Perusahaan Azan exports its rusks to Iraq, Jordan, Oman, Ethiopia and Brunei.

It has been a learning process, and the company has made many mistakes along the way. For instance, it opened another factory in Teluk Intan, together with 14 partners, in 1978 but was forced to sell out in 1985.

“We use five tonnes of flour to produce 50,000 rusks per day, which is more than a million packets per month,” Mohd Ghazali says.

The rusks, he adds, are very popular and have garnered a nationwide following. People come to their factory from as far away as Singapore to buy them.

Sometimes, they see cars of the menteri besar or Yang di-Pertua Negeri pulling up outside. At first, Mohd Ghazali would be worried but soon he learnt to relax. The VIPs were just sending their drivers over to buy the rusks.

When Tesco Stores (M) Sdn Bhd opened an outlet in Kuala Pilah, Perusahaan Azan approached the hypermarket to sell its rusks. “They asked us to supply a variety of foodstuff besides rusks, such as local cakes and murukku. Since we only produced rusks, we had to source for the other foodstuff.

“We were required to pay an upfront fee of RM50,000 during this festive season, but we received orders for RM500,000, so it was all right,” says Mohd Ghazali.

Though the margin was good, Perusahaan Azan was not able to accommodate larger orders because it did not have the required production capacity. So it was barred from supplying to Tesco.

“We invested in new machines that gave us the required capacity and went back to Tesco. And we persuaded them to give us the contract,” he says.

The company has grown by leaps and bounds. From 10 workers, all family members in the early days, it now has 30 staff and a host of modern machinery. Where it used to take 11 hours to mix the dough and package the products, it now takes six.

Today, the company is well in the black, making about RM3 million per year, with a profit margin of about 20%. It supplies its products to retailers, grocery stores, canteens and cafés. But it does not only depend on the sales from these retailers as it also has a captive market — hospitals, camps, boarding schools, prisons and government airlines.