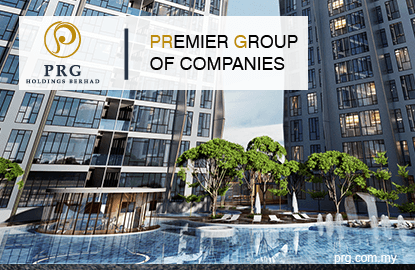 KUALA LUMPUR (May 23): PRG Holdings Bhd posted a net profit of RM1.57 million or 1.07 sen per share for the first quarter ended March 31, 2016 (1QYF16) driven by the profit recognition from Picasso Residence and progress billings on the progress of works from the construction contract in Ipoh.

The group's manufacturing segment registered a revenue of RM22.3 million compared with RM21 million previously. But pre-tax profit was lower at RM400,000 versus RM1.1 million in the previous year due to product mix which contributed to lower margin.

Its property development and construction segment recorded a revenue of RM8.8 million, higher than the RM5.8 million recorded in the same quarter of last year. The segment's pre-tax profit was RM2.3 million as compared to a loss before tax of RM900,000 a year ago.

Going forward, PRG expects a favourable impact from the Trans-Pacific Partnership (TPP) in the mid to long term in the manufacturing segment.

On the property front, it expects sales uptake by foreigners to continue due to the weak local currency, although Malaysian property market is expected to remain challenging.