PKFZ bounces back from troubled past

EMERGING from one of the biggest scandals in the country, the Port Klang Free Zone (PKFZ) is determined to become a success story.

Those behind the revival of the free trade zone, which was once headed towards becoming a RM12.4 billion white elephant, say PKFZ today is testimony to prudent management and good governance.

“To demonstrate our confidence, we have even rejected the final drawdown of the loan from the Ministry of Finance (MoF), amounting to RM689 million,” PKFZ Sdn Bhd chairman Datuk Teh Kim Poo tells The Edge.

The soft loan, amounting to RM4.3 billion, is divided into four packages, with the final drawdown of RM689 million made available at the end of last year.

“In 2012, the PKFZ board made a proposal to the MoF that we won’t need the final drawdown as we will be able to pay for the development work on our own. At the end of last year, the MoF agreed to it and this opened the eyes of a lot of people on why we rejected it,” says Teh.

Without the final drawdown, the loan amounts to about RM3.5 billion, he says, adding that the loan has been restructured.

“We settled the restructuring [of the loan] at the end of last year through the Port Klang Authority (PKA). We were able to do this through the PKA’s injection of about RM200 million per year into PKFZ.”

According to Teh, the occupancy rate of the facilities in PKFZ is nearing 100%, as compared with only 30% in 2011. PKFZ also recorded operating surpluses for the last two years.

“Our operating surplus this year until July was RM43 million, and annual revenue is now between RM120 million and RM150 million,” he says.

“Revenue can only go up as the lease rates are raised by 3% annually. We will reach our peak in 2017, when all the facilities are fully occupied.”

According to Teh, PKFZ’s salaries and maintenance and utility costs come up to about RM10 million a year.

PKFZ is owned by the PKA, which generates income through the lease of Northport and Westport in Port Klang, Selangor.

Teh says that based on PKFZ’s cash flow projection, the company will have no problem paying off the loan over the next 17 years, with annual repayments amounting to RM280 million. “Our income and the cash injection from the PKA will ensure this works out.”

From this year until 2016, PKFZ will be repaying RM170 million of the loan per year.

In 2017 and 2018, it will repay RM179 million and RM172 million respectively, while the following years will see repayments of almost RM283 million annually.

“We may even reduce the repayment years if our operating surplus increases. But that too provided there are no leakages,” Teh says.

According to Teh, almost 75% of the terraced factories have been taken up via long-term agreements, with the additional 25% being occupied by temporary tenants. All light industrial units and land have already been leased out.

The business-class hotel, consisting 138 rooms, aims to cater for those dealing with the ports, while the hall can accommodate an exhibition with about 700 booths.

These developments meant that PKFZ is no longer a white elephant, Teh says. “We have managed to put aside the past and focus on business. We have left behind all the controversies and taken a different position, focusing only on business.”

SM International will be operating the properties under a lease agreement for five years, with subsequent five-year extensions. It will also bring in China National Technical Import Export Corp to use the facilities.

Teh says SM International is also working on assisting Malaysian small and medium enterprises by matching related industries in China with local industries, making it a mutually beneficial arrangement.

SM International chairman Xia Baowen says the company is also focusing on the halal industry as the production of halal products in China is relatively small compared with other goods.

He says the Chinese market for halal food is only about 5%, and one of the contributing problems is the lack of certification.

Since last year, SM International has received bookings from about 50 companies from the halal industry to start their operations in PKFZ.

The company is now negotiating with another 100 halal manufacturers from across China to invest in PKFZ.

“Malaysia is already an Islamic product distribution hub as most halal manufacturers in the world have opened their offices here. It has its influence in the Islamic market,” says Xia.

“Although the halal market in recent years has been affected by the political turmoil in the Middle East and the European financial crisis, demand will surge when the situation stabilises.

“Cosmetics and health products, medicine and food will need to be halal-certified so that they can be exported to Muslim countries, and PKFZ will be the most suitable base for that.

“Our focus next year will be on the commercial zone and lease of our trade booths and offices to Chinese investors.”

SM International, which also distributes halal food, provides investors with information on local trade policies, such as the 10-year tax exemption for factories, and assistance in securing the necessary documents for operating in Malaysia. 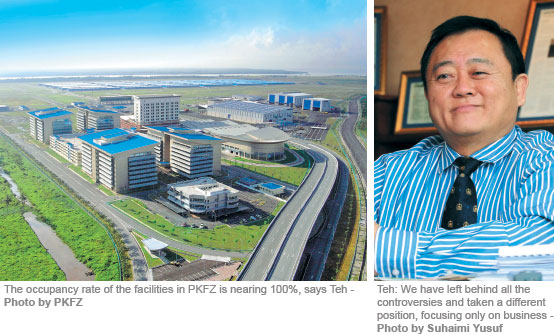