The perils of raising rates 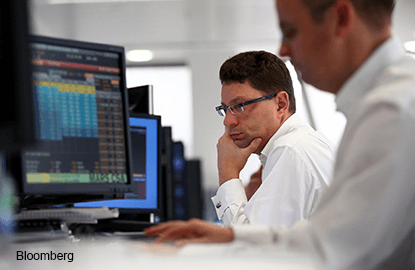 WITH any luck, the world economy will eventually be strong enough for central banks to follow the US Federal Reserve in ending what has been an unprecedented period of extremely low interest rates.

If and when they do, they will run straight into the same issue that the Fed now faces: Raising rates will precipitate unusually large losses for investors.

Over the past several years, investors have gone to great lengths in their search for returns in a low-rate environment. They have done so in part by buying longer-maturity bonds, which tend to offer higher yields but are also more sensitive to changes in rates.

One gauge of this risk is effective duration, which estimates the percentage decline in a bond’s price given a one-percentage-point increase in yield. The measure is near all-time highs in the United States, according to a report issued last week by the Office of Financial Research.

The situation globally is no less precarious. Consider the effective duration for the BofA Merrill Lynch Global Broad Market Index, which tracks about US$45 trillion (RM193.9 trillion) in investment-grade bonds issued in major currencies — including government, corporate, mortgage and other asset-backed securities.

As of last week, it stood at 6.6, meaning that a one-percentage-point increase in yield would wipe almost US$3 trillion off the value of all the bonds included in the index. That is a larger potential loss than at just about any point since the index’s inception in 1996.

The high level of interest-rate risk illustrates a dilemma for central bankers everywhere. The power of traditional monetary stimulus depends in large part on the willingness of people and companies to borrow for new projects and purchases.

But as the debt burden grows, it makes markets and the entire economy more susceptible to rate increases. It can also undermine the effect of rate cuts, as borrowers increasingly struggle under the weight of their existing obligations.

The longer-term solution is probably to get debts down to a more manageable level and ensure that they stay there. This will not be easy, and may ultimately require policies as radical as widespread write-downs, or allowing central banks to buy and retire obligations — options that Adair Turner, a British academic and former financial regulator, explores in his book Between Debt and the Devil. In the meantime, the world’s central banks will have to move carefully. — Bloomberg View