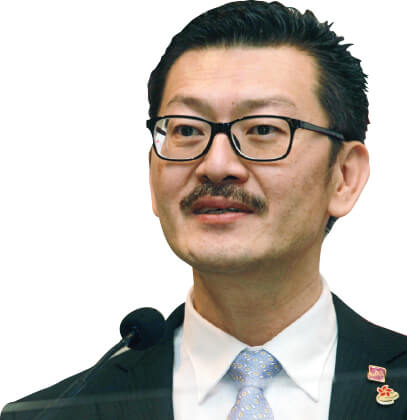 Dixon: We want to make sure we don’t miss out on this digital age, particularly the IoT and wearables segment. Photo by Chu Juck Seng

KUALA LUMPUR: Home-grown electrical appliances manufacturer and trader Pensonic Holdings Bhd, which has always counted on its bricks-and-mortar stores for sales, is reinventing itself to keep up with the times amid a slower retail market.

On the back of announcements last year that it would be stepping into the Internet of Things (IoT) space, the group is planning to launch its own e-commerce platform in the middle of next year to tap into Malaysia’s growing love for online shopping.

“The company has come to a crossroads and needs to catch the digital wave now to stay relevant,” said chief executive officer Dixon Chew Chuon Jin. At 48, he is the oldest of Pensonic founder Datuk Seri Chew Weng Khak’s three sons.

“We have to allocate resources for future businesses to seek transformation in the next five to 10 years. Being in the home appliances segment, we missed out on the mobile phone and personal computer wave in the 1990s till 2000s.

“We want to make sure we don’t miss out on this digital age, particularly the IoT and wearables segment, which is why we have a consortium with some industry players to come up with a product or concept for the future,” he said.

Started in 1965 under the name of Keat Radio and Electrical Co as a small retailer-cum-workshop for electrical home appliances, the company then turned to making its own brand of products and was eventually renamed Pensonic. Today, the 52-year-old Penang-based group manufactures and sells low-to-mid-range products under its own namesake, as well as premium brand products under Lebensstil Kollektion and Cornell.

It is also the sole Malaysian distributor for a few internationally renowned household appliances, like Princess from the Netherlands and Indesit from Italy. In Singapore, it is the sole distributor for Morphy Richards from the UK.

The group has chartered three phases for its long-term growth, the first being a rebranding exercise that started in 2005, under Dixon. The next phase is the e-commerce platform, and then the IoT and smart products.

“We are riding on the trend of Internet usage and mobile phones. The digital platform has become unavoidable. As the market is soft, we are upgrading our customer relationship management (CRM) unit to provide more convenience to end users by coming up with a [mobile] app for consumers.

“With online registration, we can reward customers with credits for new purchases, enable the redemption of rewards [online], and give them more extended warranties,” Nelson told The Edge Financial Daily.

These digital initiatives would enable Pensonic to collect customer data which would then be used to develop smarter devices that cater better to customers’ needs, he said.

In its financial year ended May 31, 2017 (FY17), Pensonic saw a 20% rise in revenue from e-commerce and TV shopping, but the absolute number and contribution to the group are still minimal compared to its offline retail business.

“According to studies, overall online purchases [in Malaysia] minus hotel and airline bookings are relatively still very small but we foresee growth in this area. We are building the foundation now and when the time is right, we expect it to boom,” Nelson said.

Pensonic has put together a team to focus on the e-commerce platform and is spending about RM500,000 for the infrastructure, Nelson said. Moving forward, its 700 retailers nationwide will also double up as pickup centres for customers, he said.

On smart products, he said some 10 categories of appliances have been identified for value adding, where the group will incorporate the aspect of IoT into the products, which will take into account the evolving needs of customers.

Malaysia remains the group’s primary market, contributing some 68% of its revenue based on FY17 data. With the Asean presence in Singapore, Cambodia, Indonesia and Brunei, the company is looking to expand its regional footprint, especially in Cambodia, where over half the 16 million population is under the age of 30. Beyond Asean, it is also present in the Middle East.

However, the group is not upbeat about prospects due to an uncertain economic outlook that continues to impact consumer purchasing power. While it continues to strive for cost rationalisation and to optimise resources, it expects growth to be flat in terms of revenue and profit for FY18.

Meanwhile, contributions from its Middle-East market, which was affected after it banned the import of finished products, are expected to improve after its manufacturing plant in Egypt is fitted with a new production line.

“We are providing value engineering and additional services to our customers in Egypt by helping with partial manufacturing and exporting key parts there. The production line began about six months ago.

“Once it is completed, our products would meet with the safety standards there that are similar to our Scientific Research Institute of Malaysia (Sirim) standards. This would ensure smooth entry to seven to eight Gulf states as the import barrier would be cleared,” Dixon said.