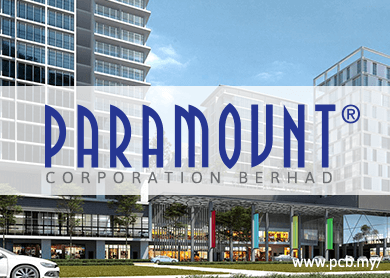 He estimated that 75% of the company’s RM400 million sales target will be derived from its properties in the Klang Valley and 25% in the north of the Peninsular. To date, it has RM420 million worth of unbilled sales.

“We are very much on track, and the sales numbers for the first quarter ended March 31, 2015 (1QFY15) were relatively strong for us, due to pre-GST (goods and services tax) buying. We achieved strong 1Q sales of close to RM150 million,” he said.

The better results were mainly due to the doubling of revenue from its property division revenue rising by 94% to RM128.5 million.

“These are big projects and we will be selective as our hands are already full with the five new projects we are going to take on. However, we are open to, and are looking at, joint-venture developments too.”

He said that the property developer and education provider will start to look at overseas projects once the group’s annual revenue reaches RM1 billion.

For FY14, Paramount’s total revenue stood at RM510 million. Chew estimates that the RM1 billion revenue can be achieved within the next three to five years.

“We have six ongoing projects with two at tail ends — we are looking at another RM6 billion in gross development value (GDV) for new projects not launched yet, and RM9 billion [GDV worth of projects] on 900 acres (364ha) of land over the next five to 10 years,” Chew said.

He said Paramount sees strong potential for its development in Salak Tinggi — which is close to the construction of Xiamen University. It has acquired 237 acres of freehold land there for RM230 million.

“We realise that there is big demand for the segment of more affordable housing within the price range of RM400,000 to RM800,000, and see that as a strong segment going forward.

On its education segment, Chew said the group, which owns and operates — among others — Sri KDU International School, KDU College Penang and KDU University College, plans to open two to three new schools within the next three to five years.

Paramount closed at RM1.87 yesterday, giving it a market capitalisation of RM781 million.