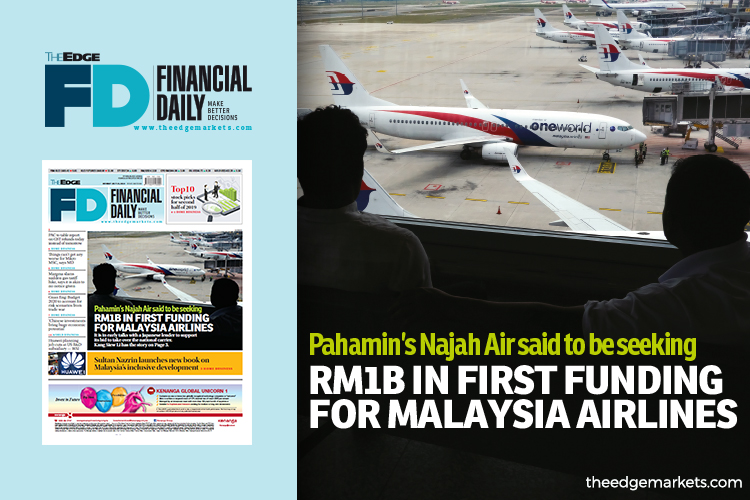 The company’s talks with the lender are still at an early stage and there is no guarantee a deal will happen, according to people familiar with the matter.

If the deal materialises, the Japanese lender will become the main funding source for the takeover offer, a source told The Edge Financial Daily. The move comes after the six-man group met Prime Minister Tun Dr Mahathir Mohamad on July 3 to express its interest in helping the government turn around the ailing national carrier. During the meeting, the group sought the approval of the premier to conduct due diligence on the airline in order to come up with a detailed restructuring plan.

It is understood that the group plans to take up a minority stake in the airline in a debt-for-equity swap, and wants control of the board and management.

Another source said tycoon Tan Sri Syed Azman Syed Ibrahim of Weststar Group, one of Malaysia Airlines’ suitors, has approached Najah Air seeking to team up with the latter to take over the national carrier. However, talks are still preliminary.

It was reported that Weststar had been invited by Khazanah Nasional Bhd, Malaysia Airlines’ sole shareholder, to put in a bid to rescue the loss-making airline. Meanwhile, aviation consultancy firm Endau Analytics has mooted the idea of setting up a task force to help the prime minister make an informed decision on Malaysia Airlines’ future.

When contacted, its founder Shukor Yusof said he proposed the idea to the prime minister last week.

He believes a task force, similar to those set up at other government-linked companies, can help Dr Mahathir assess takeover proposals received from potential investors, as well as give unadulterated opinions. “Malaysia Airlines is surviving on public money. It’s only fair for Malaysians to have a say in its fate. There must be accountability, checks and balances.”

Likening the task force to the Council of Eminent Persons, he said it should be placed under the purview of the Prime Minister’s Office (PMO) and can make recommendations directly to the prime minister, who is also Khazanah chairman.

“No one person can help deliver solutions to Malaysia Airlines. It has to be a collective initiative — a group of professional Malaysians who are like-minded, independent and with integrity, who will advise the prime minister to find the best solutions for the carrier, including appointing a new management and board of directors at the airline.

“The task force will not be involved in the day-to-day running of the airline, but [it should comprise] people who understand the business and have a wide network within the aviation industry to provide guidance to the airline under the auspices of the PMO,” he said, adding that the task force should serve at least one year to be effective.

Shukor believes the positions of the current management and board are untenable, considering the years of underperformance and missed targets under their watch. He also sees Malaysia Airlines’ proposed Long-term Business Plan as flawed. The new business plan, which is still awaiting approval from the Khazanah board, outlines that it can achieve financial break-even by 2022 and generate sufficient income to cover the cost of the capital it uses to fund its operations two years later.

“Malaysia Airlines doesn’t have the luxury of time. It has fallen far behind its competitors. It needs to raise US$1 billion for nine Boeing 737 MAX planes that start delivering in July 2020. Then there is the RM5 billion payment to bondholders due in 2022,” said Shukor.

He opines that Malaysia Airlines is on track to lose at least RM1 billion this year, taking into account fuel prices, foreign exchange volatility and intense competition. “That’s a loss of about RM3 million a day.”

He also anticipates significant losses at FlyFirefly Sdn Bhd, following the suspension of the turboprop operator’s operations into Singapore for over four months.