Operations in klia2 not at risk, says Liow 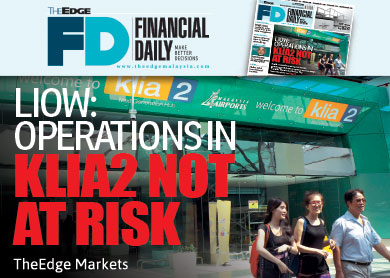 KUALA LUMPUR: Six months after the opening of the RM4 billion klia2 in Sepang, major problems are cropping up at the new low-cost carrier terminal after water ponding or water retention was discovered at sections of the apron and operating without a Certificate of Practical Completion (CPC).

Transport Minister Datuk Seri Liow Tiong Lai gave an assurance that passengers and flight operations are not at risk, and major investigations are being conducted.

Describing the ponding as “minor”, Liow called for an independent audit committee to be set up to conduct a thorough investigation into the matter.

“Malaysia Airports Holdings Bhd (MAHB) has been tasked to facilitate this enquiry and will be held fully accountable. The safety of passengers and flight operations are and has always been of paramount importance to my ministry,” he told reporters at the Parliament lobby yesterday.

Liow stated that the findings by the audit committee will be made public when completed.

The minister dismissed reports of floods occurring at klia2 recently, adding they had been “grossly misinterpreted and were inaccurate”.

“klia2 has never experienced flooding that would have resulted in disruption of operations,” he said.

Liow clarified that his written response to Parliament on Oct 15, 2014 on the ponding issue had been “misconstrued and twisted by irresponsible parties”.

“In the said response it was made very clear that the ponding issue was expected during the construction phase. However, after the construction period, water ponding continued at the apron, then MAHB has got to take action,” he said.

MAHB blamed the water ponding to differential settlement, the unequal settling of the foundation.

In a statement yesterday, MAHB said it had embarked on a special maintenance programme, which includes routine patching works, resurfacing or overlay works, and the construction of concrete slab at the affected parking aprons and taxiways.

“Due to the fact that this was anticipated, we are able to act quickly to rectify the depressions as they happen. This is done in accordance with the ICAO’s (International Civil Aviation Organization) safety and operational guidelines,” said MAHB managing director Datuk Mohd Badlisham Ghazali.

According to Mohd Badlisham, klia2’s apron, taxiway and Runway 3 have been independently audited and declared safe for operations by Ikram and the ICAO prior to its opening.

“Notwithstanding this, MAHB will provide full support and cooperation towards any further study required by the relevant authority to ensure the safety of passengers and airport operations. MAHB is committed to resolving the settlement issues in the best possible manner and will continue to work closely with all the stakeholders including the airlines towards this common objective,” he said.

In a separate statement issued earlier yesterday, MAHB confirmed The Edge Financial Daily report on Monday that the CPC had not been issued for the main terminal building of klia2 as there were “material contractual obligations on the part of the contractor which have not been satisfied”. However, it did not disclose the material contractual obligations.

Without the CPC, the terminal building is still under the responsibility of the main contractor — the UEM Construction Sdn Bhd and Bina Puri Sdn Bhd joint venture — and not MAHB.

MAHB said the CPC is a certificate issued contractually by the airport operator “when it is satisfied that all works have been completed to its satisfaction, meeting all the requirements of the contract”.

It said UEMC-Bina Puri had been notified of MAHB’s intention to impose liquidated and ascertained damages (LAD) and the LAD will continue to apply in accordance with the terms of the contract. MAHB started imposing the LAD of RM199,445.40 per day on UEMC-Bina Puri from June 16 for the latter’s inability to complete the work by the approved deadline of June 15.

“We hope that they will be able to rectify any issues as soon as possible. Be it the CPC, tarmac, walkalator or apron, these will ultimately lead to disruptions to the [daily] operations,” Aireen told reporters after the launch of AirAsia’s in-flight WiFi services in Kuala Lumpur yesterday.

This article first appeared in The Edge Financial Daily, on November 5, 2014.