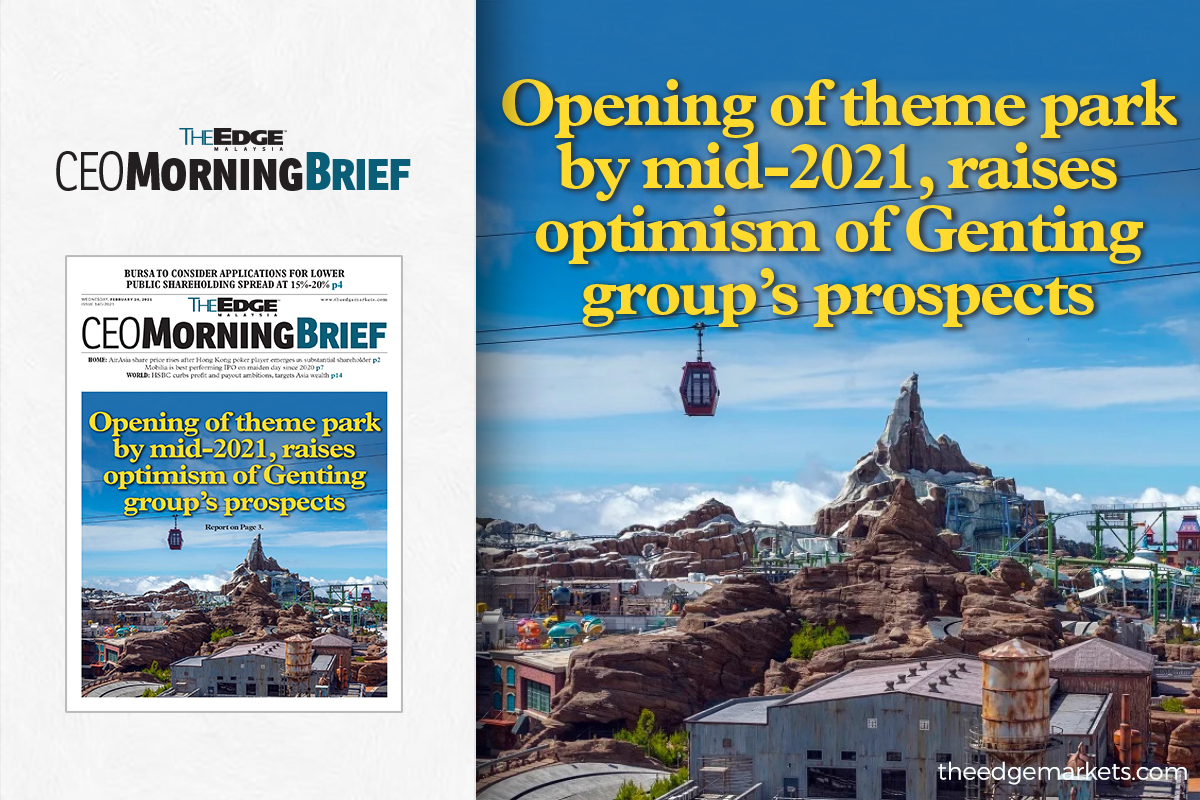 KUALA LUMPUR (Feb 24): Genting Malaysia Bhd’s outdoor theme park Genting SkyWorlds, in which it has invested US$800 million, will open in the middle of this year.

The news gave a big boost to the casino operator’s share price as the investing fraternity took it as a positive sign that GENM’s operation will return to normal soon after the shutdown caused by the pandemic.

“It took us a number of years, but the important thing is that we are committed to the park. We are going to ensure that it opens,” said Resorts World Genting’s head of business operations and strategies Lee Thiam Kit in a virtual media briefing on Tuesday.

“We are almost ready. We are putting the finishing touches on this amazing theme park, which we believe will be Southeast Asia’s most-anticipated theme park. We believe we will deliver the very best experience to our guests throughout this journey,” Lee added.

Spanning across 26 acres, the theme park will have 26 rides and attractions. It will be able to accommodate some 20,000 tourists.

Among analysts tracked by Bloomberg, of the 16 research firms covering GENM, 10 have 'buy' calls, five 'hold' recommendations and one 'sell' with an average target price (TP) of RM2.90. JP Morgan has the highest target price of RM4. Maybank Kim Eng Holdings Ltd regional gaming analyst Samuel Yin Shao Yang attributed the share price climb to the news of Resorts World Genting’s outdoor theme park Genting SkyWorld that is scheduled to be open in the middle of this year as well as the vaccination rollout.

Another gaming analyst, who declined to be named, said it was a “surprise” that GenM confirmed that it is targeting to launch the theme park in mid-year.

However, the analyst pointed out that earnings recovery would only materialise in the next financial year ending Dec 31, 2022 (FY22) as it takes time for the vaccination programme to be completed.

Nonetheless, as vaccinations in the US and the UK are proceeding at a very fast pace, this may bode well for GENM’s operations in these countries.

The analyst noted that the 1QFY21 performance is likely to be affected by the reimplementation of the Movement Control Order (MCO) or the one month of closure in operations, coupled with the still closed overseas casinos such as in the UK.

GENM is expected to release its fourth quarter earnings this Thursday.

Maybank Kim Eng’s Yin concurred that the prospects of GENM’s recovery will be very much dependent on the pace of the vaccination rollout.

“Future lockdowns are unnecessary once we achieve herd immunity against Covid-19,” he added.