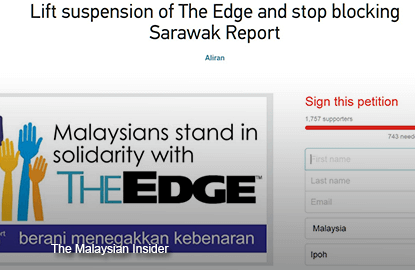 (July 27): A petition demanding Putrajaya lift The Edge Weekly and The Edge Financial Daily's suspension, as well as the block on Sarawak Report is gaining momentum online, even as the government insists that their coverage of 1Malaysia Development Berhad (1MDB) may threaten public order.

Malaysian non-governmental organisation Aliran created the petition “Lift suspension of The Edge and stop blocking Sarawak Report” on change.org yesterday, and at the time of writing, it has so far attracted 1,677 signatories.

The strongly-worded petition states that the government's action "appears to be a self-serving draconian attempt at shutting up inquisitive Malaysians" and to erode press freedom in the country.

"We condemn the latest, quite despicable, attempts to silence discussion surrounding the 1MDB debacle," says the petition.

"This can be seen in its current pathetic attempts at discrediting individuals and organisations who have brought out into the open allegations of wrongdoing by people in power – attempts which are a waste of public funds and an insult to the intelligence of concerned Malaysians.

"Individuals who should be considered patriots and loyal Malaysians and the journalists at The Edge and Sarawak Report, are now being unjustly persecuted for revealing to the public the alleged wrongdoings and the apparent rot that is 1MDB," states the petition.

It also demands that the government repeal laws that restrict media freedom, including the Printing Presses and Publications Act 1984, and stop persecuting whistleblowers.

The petition comes a day after Facebook page "Malaysians stand in solidarity with The Edge" was created to pressure the authorities to lift the three-month suspension on the two publications. The page has since received nearly 8,000 likes.

Today, several media groups announced the #AtTheEdge campaign aimed at galvanising public support for The Edge and Sarawak Report and voicing out their protest against the government's action.

The #AtTheEdge coalition urged the public to subscribe to The Edge's online edition, to wear blue or black every Monday, and to participate in #AtTheEdge's social media campaign

It also announced a gathering at The Edge's office on Friday and a separate mass rally on August 8 in Kuala Lumpur. – The Malaysian Insider