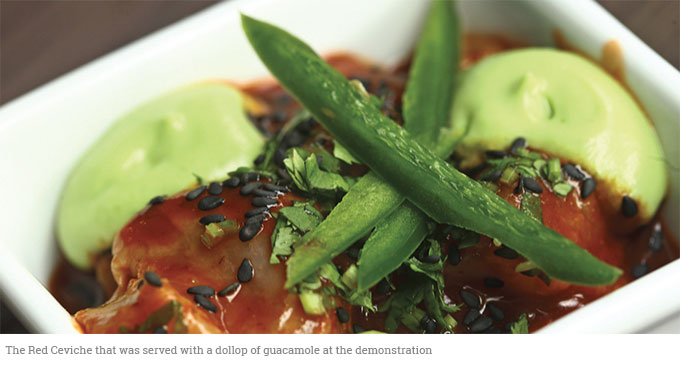 A NEW Mexican eatery at Avenue K called Fresca: Mexican Kitchen and Bar opened its doors last Friday in conjunction with celebrating 40 years of friendship between Malaysia and Mexico.

To introduce the authentic flavours of Mexico to locals, the Mexican embassy flew in celebrated chef Jorge Carlos Gonzalez from the Oaxaca, (pronounced: Wahaka) from the south western part of Mexico.

Below is a quick step-by-step-how-to. The recipe is simple and easy and one that is loaded with proteins and antioxidants.

Alternatively, the fillet can be blanched in boiling hot water for about 10 seconds and immediately placed in a bowl with ice cubes to stop the cooking process. Both methods retain the nutrients of the fish for your healthy consumption.

For the Red Ceviche, the additional step is to simply add chillies. Chef Jorge used guajillo chiles that are native to Mexico.

However, red bell peppers or any other chilli that is available at your convenience can be used as a substitute. Just make a paste and add it in the mixture in Step 3.

The level of spiciness of the dish is entirely up to the individual. On a side note, both dishes taste better with lime