Nokia — back to the future 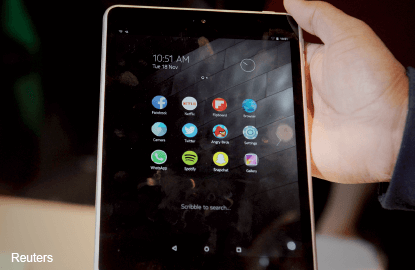 NOKIA is hiring software experts, testing new products and seeking sales partners as it plots its return to the mobile phone and consumer tech arena it abandoned with the sale of its handset business.

Once the world’s biggest maker of mobile phones, the Finnish firm was wrongfooted by the rise of smartphones and eclipsed by Apple and Samsung. It sold its handset business to Microsoft in late 2013 and has since focused squarely on making telecoms network equipment.

Now Nokia boss Rajeev Suri is planning a comeback. He must wait until late 2016 before he can consider re-entering the handset business — after a non-compete deal with Microsoft expires — but preparations are underway.

The company has already dipped its toe into the consumer market; it has launched an Android tablet, the N1, which went on sale in January in China and days ago unveiled a “virtual-reality camera” — heralding it as the “rebirth of Nokia”.

It has also launched an Android app called Z Launcher, which organises content on smartphones.

Meanwhile, its technologies division has advertised on LinkedIn dozens of jobs in California, many in product development, including Android engineers specialising in the operating software Nokia mobile devices will use.

Nokia had also planned to lay off about 70 people at the division, according to a May announcement, but a company source told Reuters that the figure had since been halved.

Nokia itself is not giving much away about its preparations, beyond saying some staff at the 600-strong technologies division are working on designs for new consumer products, including phones, as well as in digital video and health.

But it will not be easy to claw its way back to relevance in the fast-changing, competitive mobile business where Apple has been scooping up nearly 90% of industry profits, nor for it to carve out a place in electronics.

One ace that Nokia holds is ownership of one of the mobile industry’s biggest troves of intellectual property, including patents it retained after selling its handset business. It does not want to waste such resources, built up with tens of billions of euros of investment over the past two decades.

It will also get an injection of talent when it completes the €15.6 billion (RM69.8 billion) acquisition of Alcatel-Lucent, announced in April, in the form of Bell Labs — a US research centre whose scientists have won eight Nobel prizes.

It says it will not repeat the mistakes of the past of missing technology trends, being saddled with high costs, and reacting too slowly to changing consumer tastes.
To blunt such risks, it is seeking partners for “brand-licensing” deals whereby Nokia will design new phones, bearing its brand, but — in exchange for royalties — will then allow other firms to mass-manufacture, market and sell the devices.

This is stark contrast to its previous handset business which in its heyday manufactured more phones than any other company in the world and employed tens of thousands. — Reuters