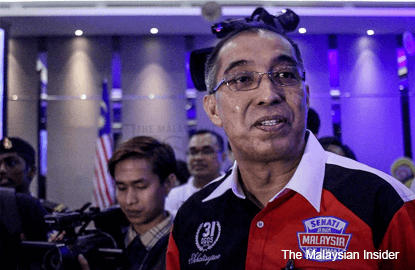 KUALA LUMPUR (Sept 25): The Communications and Multimedia Ministry will no longer draw up guidelines specifically for online news websites, in what seems to be a softening of tone on earlier proposals to have more Internet regulations.

Its minister, Datuk Seri Salleh Said Keruak, said this was because media practitioners were aware of the laws regulating their industry.

“There will be no specific guidelines for media portals.

“I feel all media, be it print or news portals, understand that there are laws governing their operations,” he told The Malaysian Insider in an email interview recently.

What was more important to the ministry, he said, was for media practitioners to be transparent in their reporting and to practise the highest standards of journalism ethics.

“Media portals tend to be bolder in their reporting approach so they should not abuse the existing freedom of the press.

“They have to guard the credibility and integrity of their profession,” said Salleh, who was formerly the Sabah assembly speaker before being made federal communications minister in a July Cabinet reshuffle.

Soon after assuming the post, Salleh said news portals might be required to register with the government under proposed amendments to current cyber laws.

He said he would look at the system used by Singapore, where online media were registered with the authorities.

He also said there would be ongoing improvements to the Malaysian Communications and Multimedia Commission (MCMC) to tackle online gambling, pornography and spread of terrorist ideology, but added that social media platforms would not be restricted.

Salleh, answering questions from The Malaysian Insider, gave an assurance that Putrajaya would not block news portals without valid reasons.

In the case of UK-based whistle-blower website Sarawak Report, the minister said Malaysian access to it was denied because it had published “baseless and false reports”.

“I give my assurance. But it would depend on situations that arise from time to time.

“Such as the actions we took against Sarawak Report, because it abused the platform by disseminating many reports about the goings-on in this country that were false and without basis.”

He added that the site, which had been reporting exposes on debt-ridden state investment firm 1Malaysia Development Bhd (1MDB), had malicious intent in publishing such reports.

“Their reasons for doing so are clear, to threaten the socio-economic stability in our country. This we cannot allow.”

The MCMC blocked access to Sarawak Report in July and it remains inaccessible in Malaysia unless virtual private networks (VPN) are used.

Salleh also acknowledged that despite being relatively newer, online media had better appeal compared with the mainstream, traditional press.

“Online media such as the news portals, although they only came about in the last few years, have managed to attract high readership. Even more compared with traditional media.”

However, he added that it was unfair to compare the maturity level of Malaysian media with the West.

“This is because developing nations have gone through a different rate of progress compared with developed countries, especially in the West.”

The Sabah minister said this was seen in the station’s move to screen live telecast of parliamentary debates, along with arguments from opposition MPs.

“In this respect, the government is committed to giving the people an opportunity to follow unedited Parliament proceedings.

“To me, this is healthy and positive and in line with the country’s status of practising parliamentary democracy.”

The minister also said Putrajaya was not out to restrict access to online information but only wanted to ensure that such information was accurate and not mislead anyone.

“We also need to protect the majority of Malaysians who use the Internet for the right reasons and create a trusted and safe cyber space so that Malaysians can continue deriving benefits from use of the Internet.” – The Malaysian Insider