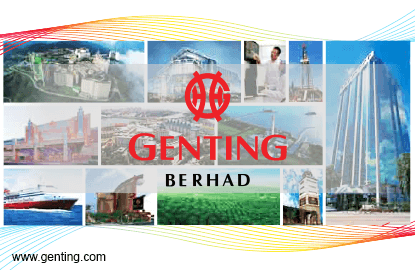 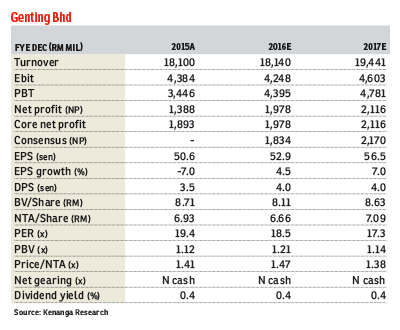 We have not seen such a strong performance from Genting for a long time since 2009 and 2010, when Resorts World Sentosa commenced operations in February 2010.

The recent rally in its share price was in tandem with the rally in Macau gaming stocks, which rose more than 15% YTD on average on improved casino revenue data.

However, the significant factor to Genting could be highly on account of a potential initial public offering (IPO) of its 20.7%-owned TauRx Pharmaceuticals Ltd.

The world’s largest casino market, Macau, has gone through a tough time in the past two years due to effects from the Chinese government crimping down on corruption and a slowdown in the Chinese economy.

However, since then, GGR registered a three-month month-on-month growth to 19.52 billion Macau pataca (RM9.51 billion) in Febuary 2016.

This has propelled buying interests in gaming stocks, driving stock prices higher by more than 15% in the past three months.

It was first reported in January that the Singapore-based TauRx is planning an IPO on Nasdaq next year with a potential valuation of US$15 billion, which could be a major catalyst for Genting should it materialise.

In mid-March, it was quoted in the press that TauRx plans to present results from its ongoing final human trials on its experimental Alzheimer’s drug, LMTX, as early as July.

So far, there is no drug that can treat Alzheimer’s and there has been a string of failed experiments from other drug companies.

We believe that these two pieces of news are the major catalysts for the recent share price rally.

Genting has risen 34% YTD, narrowing the share price discount to its sum-of-parts valuation to 23% from about 40% just at the beginning of the year and its 10-year discount average of about 30%.

We believe it is time to review the stock’s valuation which in our opinion is close to its fair valuation.

There is no immediate firm earnings catalyst at the moment.

The recovery in Macau casino revenue in the past three months, which was from a low base, may not be a fair indication that a similar recovery will happen in Singapore, which is Genting’s major earnings contributing market.

Meanwhile, it is still too early to speculate about the LMTX test and the listing of TauRx. — Kenanga Research, April 1