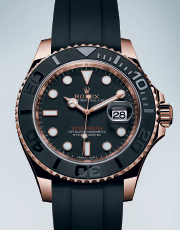 ROLEX doesn’t do anything halfway. When the curtains went up at Baselworld 2015, we were as surprised as everyone else to see a strange rubber strap on the new Everose gold Yacht-Master sitting in the Rolex booth window. Precious-metal sport watches are nothing new for Rolex, but a rubber strap seems almost too cool and under the radar for the brand.

We should have known it was no ordinary rubber strap, though. It’s the new Oysterflex bracelet, and it deserves a closer look.

Most rubber straps are about as simple an affair as a watch strap can be: two pieces of injection-moulded rubber, one with holes and the other with a buckle at the end. They’re flexible, they don’t get smelly or absorb sweat, and they lend some fake deep-sea diving credibility to those of us who spend most of our watch-wearing days above the surface. There’s really little need to innovate or add anything here, but of course Rolex found ways to make this basic accessory even better.

Every Rolex employee I’ve spoken with (along with the pile of marketing material out there) is careful to refer to the Oysterflex as a bracelet and not a strap. Typically, metal links qualify as a bracelet, while a leather, rubber, or fabric band would be called a strap. The Oysterflex is not an injection-moulded rubber strap, but instead a two-piece titanium bracelet with a rubber coating.

Yes, that’s both as prosaic and as complicated as it sounds.

The foundation of the Oysterflex is a pair of titanium blades, one on each side of the watch. These are coated in black elastomer (a substance similar to what you’ll find on the Apple Watch) and anchored to the Yacht-Master’s case. Underneath each half is a patented longitudinal cushion system, which is basically a collection of strange rubber flaps with a funny name. They’re supposed to “stabilise” the watch, but more on that later. The solid Everose gold Oysterlock clasp holding the two pieces together seems like overkill, but anything else in this context might feel like a letdown.

On the wrist the Oysterflex does have the same rigidity that you’d expect from a metal bracelet but without that cold, silky feeling when you first put it on. I don’t know if I feel like those pads stabilise the watch (whatever that means), but they do allow some air to circulate between the rubber and your skin. A few hours into a hot day this will become your favourite feature, I promise. I thought I’d find the gold clasp annoying and heavy, but it actually balances out the watch nicely, making the whole package feel more complete.

There are no two ways about it: The Oysterflex bracelet is one of the most overengineered, overly complicated, and probably unnecessary watch accessories ever. But that’s kind of why it’s so awesome. Someone at Rolex headquarters decided a rubber strap might be an interesting idea to think about, and then followed that out to its logical conclusion, giving us a titanium and rubber hybrid that has a patented cushioning system and a solid gold clasp.

That’s a kind of thinking I can get behind. — Bloomberg 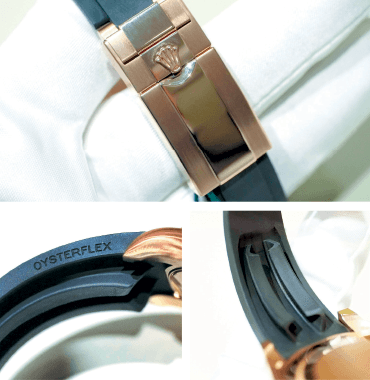