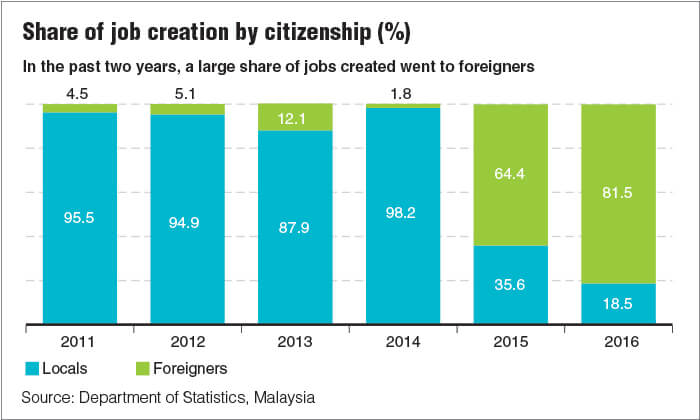 KUALA LUMPUR: An incredible 81.5% or four out of five jobs created in 2016 went to foreign workers, even as graduate unemployment saw a sharp increase from 2011, according to Bank Negara Malaysia (BNM) which has cautioned a low-wage, low-production strategy is untenable in the longer term and risks putting the country behind its rivals.

Foreign workers were occupying an increasing number of jobs as graduate unemployment trended up to 4.1% in 2016.

“The number of graduates in Malaysia increased by around 880,000 persons over the similar period, but with a corresponding high-skilled job creation of only 650,000 persons. This translates into increasing graduate unemployment from 2011 to 2016, outstripping that of non-graduates,” BNM observed in its annual report, released yesterday.

Although foreign workers as a percentage of the labour force trended downwards from a peak of 18.8% in 2007 to 12% in 2017, they still hold more than a fifth of jobs in agriculture, construction and manufacturing.

According to the central bank, Malaysia’s dependence on low-skilled foreign workers shapes its reputation as a labour-intensive, low-cost destination for foreign investors, many of whom seek to primarily leverage its relative ease of hiring foreign workers and lower labour costs.

“In the end, this self-reinforcing image further locks Malaysia into this low-cost bind that would require significant resources to undo. This also worsens the displacement of local talent migrating to higher-paying employment countries, culminating in a brain drain for Malaysia,” it cautioned.

Meanwhile, the availability of cheap foreign workers allows employers to keep wages low, which consequently risks Malaysia being trapped in a low-wage and low-skill conundrum.

“This distorts the natural wage clearing mechanisms that would have otherwise driven wages upwards. It is entirely plausible that the very high presence of foreign workers in the private sector could widen wage differentials and deter job creation for locals.”

In the same vein, BNM said that as long as blue-collar wages continue to face downward pressure, employers will not be hard-pressed to adopt productivity-enhancing measures.

“Malaysia’s labour-intensive methods and longer working hours are less efficient than those obtained through technological advancement and automation.

“Reliance on low-wage, low-cost production methods is an untenable long-term strategy with risks of Malaysia being left behind as its competitors are actively embarking on industrial upgrading,” it said.

BNM highlighted several non-economic implications which include foreign workers’ remittance, strain on public infrastructure, and the (large) presence of undocumented migrants in Malaysia.

“Many [foreign workers] also remit a significant share of their income abroad, thus reducing domestic spillovers in the domestic economy. Total outward remittances in 2017 remained sizeable at RM35.3 billion, of which the bulk was accounted for by foreign workers.”