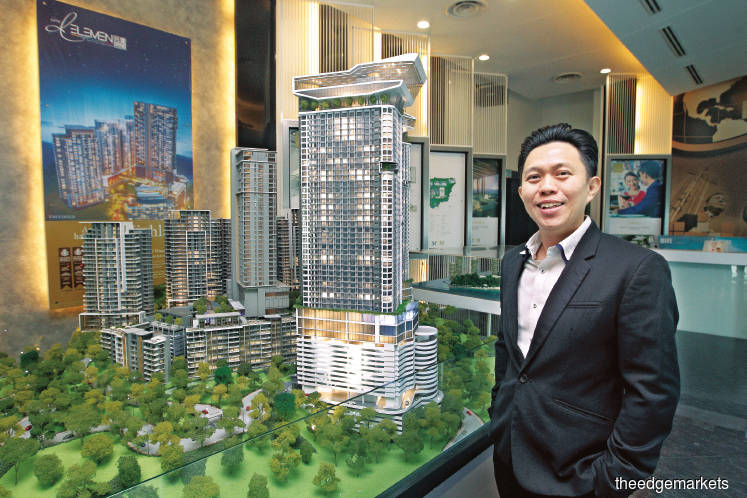 This development is more of a tourism property … people don’t buy this type of property for their own stay.” — Chang NCT Group of Companies’ ongoing development, Grand Ion Majestic, will be officially launched this month. Tucked away in Genting Highlands, about 20 minutes by car from Arena of Stars, the RM1.4 billion serviced apartment development boasts three towers that will comprise a total of 1,885 units. The two-acre freehold project is adjacent to another of the group’s serviced apartment developments, the seven-block Ion Delemen.

The development has made it into The Malaysia Book of Records four times — for its glass house, banquet hall, link bridge and sky lift.

According to senior sales and marketing general manager James Chang, the development is an investment product and will operate like a hotel. The group has signed an agreement with Wyndham Hotels & Resorts.

“This development is more of a tourism property … people don’t buy this type of property for their own stay,” says Chang, adding that the term that is used is condotel, a combination of condominium and hotel.

Grand Ion Majestic is slated to be completed in 2022.

Grand Ion Majestic is the second phase of NCT Group’s development in Genting. The first phase is the 10-acre Ion Delemen, which was previously an abandoned project known as Billion Court. According to Chang, it was abandoned in 2002 and revived by NCT Group 10 years later.

Completed in 2016, Ion Delemen is also an investment property. Blocks 1, 5, 6 and 7 are managed by NCT’s hospitality brand, Ion Delemen Hospitality, while the remaining blocks are run by Gloria Hotels & Resorts.

“The rates are the same for both weekdays and weekends. But during peak seasons, the price will increase by RM100,” says Chang. He adds that the rates for Grand Ion Majestic will be similar.

Chang explains that purchasers will sign a nine-year contract with NCT Group, under which the latter will manage and lease out the former’s units on their behalf.

Each year, purchasers will get five days’ complimentary stay and 20 days’ stay at a 50% discount.

The contract is divided into three three-year terms. During the first term, purchasers will be guaranteed a 7% fixed return per annum, to be paid out quarterly. For the subsequent years, it is a profit-sharing basis and the purchaser will get 70%.

“Purchasers are not allowed to break their contracts. We have signed an agreement with the hotel operator and provided them with the number of units. So, the purchasers cannot revoke their units in the middle of the contract,” says Chang.

After the contract ends, he adds, purchasers have the option of managing their units themselves or renewing the contract with NCT Group for another nine years.

NCT Group is in the process of submitting for the approval of two developments — one on Penang island (16 acres) and the other in Melaka (26 acres). Chang says the company hopes to obtain the approvals by next year. The developments will be targeted at both owner occupiers and investors, he adds.

In Genting, the developer has more than 20 bungalow lots ranging from 10,000 to 20,000 sq ft. “Once Grand Ion Majestic is completed, we might consider developing resort villas to cater for bigger groups [of people],” says Chang.

The developer also has land in Sepang, Selangor, and Janda Baik and Pekan in Pahang. Chang says the company is looking for development land in Kuala Lumpur and Selangor to cater for owner occupiers.

“Our buyers from other states have expressed wishes to invest in Kuala Lumpur. I think this is due to the rapid population growth. For our future projects in Kuala Lumpur and Selangor, we are looking to sell at RM400 to RM500 psf or maybe up to RM600 psf. We want to try to improve on the quality, environment and security of the units offered under the affordable homes schemes, which we think are oversupplied now,” he explains.

Chang adds that they do not focus only on investment projects. “It all depends on the location. In Genting, it so happens that the land is on the peak. If we aimed for owner occupiers, it would have been tough. So we are targeting investors.”

NCT Group began as a tile manufacturer in 1995 and ventured into property development — Taman Rambai Idaman in Bukit Rampai, Melaka — in 2012.

In the same year, it took over the abandoned Bandar Salak Tinggi and delivered 369 two-storey terraced houses and 164 low-cost apartments within two years.

The company is also involved in construction, education, hospitality and property investment.

Some of its construction projects included Asian Institute of Medical Science and Tecnology in Kedah, Saujana Aster in Putrajaya and Duta Villa in Setia Alam.