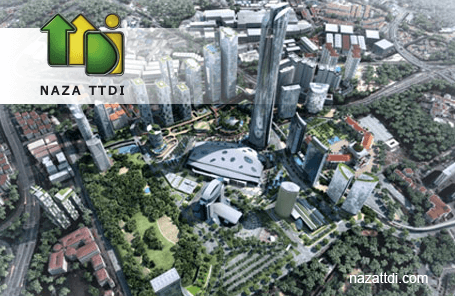 Faliq was speaking to the media after the ground breaking ceremony of the Metropolis Park at KL Metropolis today.

"In the first two months of our launch, we have received very good responses from the public, with almost half of the 616 units taken up. Given the current market condition, this is very encouraging to us. For our offices, we are speaking to several potential investors and we hope for plans to materialise by this year. As for our retail [segment] , we are still holding on to it for now, " said Faliq.

Faliq also noted that there are plans to build a 4-star hotel which he hoped to be completed by mid-next year.

Meanwhile, the Metropolis Park is located adjacent to the Malaysia International Trade and Exhibition Centre (MITEC).

Apart from MITEC, KL Metropolis is divided into eight precincts.

Naza TTDI will invest RM20 million for the adoption of Metropolis Park at KL Metropolis under the government's Greener KL initiative with the Kuala Lumpur City Hall. The investment is part of Naza TTDI's corporate social responsibility programme to help enhance and maintain green spaces in the Klang Valley.

"Metropolis Park is currently the largest park to be adopted in 2017. What's more important is that Naza TTDI proactively approached Kuala Lumpur City Hall with this initiative. I hope there will be more corporations and private organisations out there that will do the same in the near future," said the Minister of Federal Territories, Tengku Adnan Tengku Mansor who was also present at the ceremony today.

The five-acre park is set for completion in 1Q2018, with Naza TTDI pledging to manage the park over 15 years.

Metropolis Park will also have a 27,000 sq ft information centre and community hall with rooftop lawn, a sculpture park, an amphitheatre, kinetic fitness stations, jogging park and a dry and wet playground.

KL Metropolis sits on a 75.5-acre site and has an estimated GDV of RM20 billion to be spread out over 15 years.