NAZA TTDI Sdn Bhd is looking to undertake an asset injection exercise in a listed vehicle to pave the way for a reverse takeover (RTO), according to sources. The main property arm of Naza Group owns investment assets worth more than RM1 billion, mostly office and retail units.

It is said that the group intends to inject its KL Metropolis project located in Jalan Duta that has a gross development value (GDV) of RM20 billion.

Market sources say the group has set certain criteria in the search for an ideal candidate — preferably a listed company on Bursa Malaysia; it can be a company of any size but has to have a clean balance sheet and be financially sound.

“It cannot be a financially distressed company that needs to be restructured. The group doesn’t want to be a white knight,” says a source.

An RTO exercise would enable Naza Group to tap the capital market to fund the mega project going forward.

Spanning 75.5 acres, KL Metropolis is conceptualised as a commercial business district for international trade and exhibitions.

The iconic development will house a new Matrade exhibition centre, which is set to be the country’s largest with a gross floor area of one million sq ft once it is completed in February next year.

Naza TTDI is controlled by the diversified Naza Group, one the largest privately owned conglomerates with businesses in the automotive, property development, food and beverage, and hotel management industry.

At the helm of the property firm is the Naza brothers. SM Faliq SM Nasimuddin, the youngest brother, heads the group as managing director-cum-deputy executive chairman. Meanwhile, SM Nasarudin, the second son in the family, sits on the board as chairman.

KL Metropolis will be developed by TTDI KL Metropolis Sdn Bhd, a wholly-owned subsidiary of Naza TTDI. The company has so far completed more than 15,000 residential and commercial units in the Klang Valley.

To recap, Naza TTDI had in Novem­ber 2009 signed a privatisation agreement with the government and Syarikat Tanah dan Harta Sdn Bhd to construct the Matrade exhibition centre at a cost of RM628 million, in exchange for a prime tract in Mukim Batu off Jalan Duta, Kuala Lumpur.

In May 2014, the group borrowed RM100 million from Al Rajhi Bank Malaysia as working capital for its KL Metropolis project, which will be developed over 15 years.

Naza TTDI is expected to announce some joint ventures for the project this year, but it can only kickstart the development after the Matrade exhibition centre is delivered in 2016.

Danny Wong Teck Meng tells The Edge that Naza TTDI could be looking for a company with a healthy cash position and no core business.

“Naza TTDI has a huge project but it needs to tap the market for funding, so it should be looking for a cash-rich property developer with no landbank. The two can make a successful marriage and create a lot of synergies. Just free up the balance sheet, transfer the assets — an RTO is easier,” he says.

In April last year, SM Faliq reportedly said that the group may consider launching a real estate investment trust if it hits its target of RM3 billion in total investment assets within five years.

Naza TTDI’s ongoing township projects include TTDI Grove in Kajang and TTDI Alam Impian in Shah Alam, both in Selangor.

The developer also has high-impact developments such as the RM4 billion KLCC Platinum Park, which comprises one hotel block, three Grade A office towers and a similar number of serviced apartment blocks.

Its TTDI Gateway in Section 13, Shah Alam, is an integrated development that features offices, serviced apartments and retail components. The entire project is expected to generate a GDV of RM2.5 billion and is targeted to be completed by 2020.

However, such projects are unlikely to be part of the asset injection exercise. 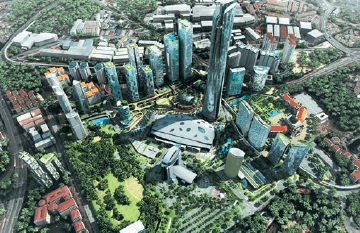