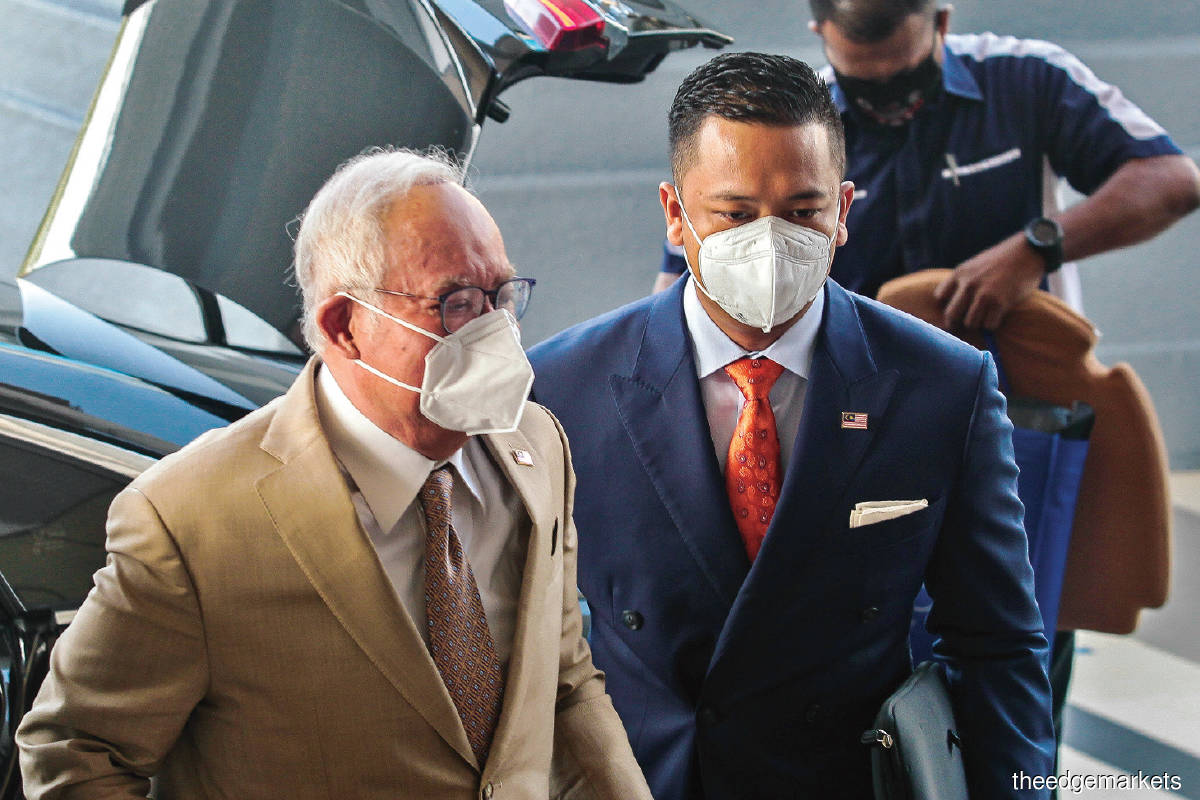 According to 1MDB, Najib allegedly received more than US$700 million of misappropriated funds belonging to the group. (Photo by Zahid Izzani/TheEdge)

AN US$8 billion civil suit by 1Malaysia Development Bhd (1MDB) and its subsidiaries against Datuk Seri Najib Razak and seven others outlines the modus operandi used by the former prime minister to siphon money out of the companies for his benefit as well as that of his co-conspirators.

“Najib would use his position, power and influence as PM and finance minister to identify a project to be entered [into] by the company, ostensibly involving the larger national interests of 1MDB. These projects require substantial funds, which are to be raised or borrowed with the support of a Federal Government guarantee. Then he would authorise or approve the project transaction and fundraising activity,” the companies stated in the legal document sighted by The Edge.

“Constraints and pressure are placed on the 1MDB board to confirm and proceed with the venture, with tight timelines imposed. Considering Najib’s position and power and the claim of larger national interests, the 1MDB board would comply with his instructions to approve it. “When the funds raised enter 1MDB or its subsidiaries’ accounts, a substantial portion, if not all, are expeditiously siphoned off and fraudulently misappropriated for improper purposes, resulting in loss and damage to the plaintiffs.”

This modus operandi was utilised to good effect a number of times. It was put into effect in the Good Star, Aabar, Tanore and the Options buyback phases, spanning almost six years. It began in 2009, when Najib used his position as chairman of the 1MDB board of advisers — leveraging Article 117 of the company’s Memorandum and Articles of Association that made him a silent director — to compel the board to do as he wanted.

According to 1MDB, the former Umno president and Barisan Nasional leader allegedly received more than US$700 million of misappropriated funds belonging to the group.

All seven individuals are alleged to have conspired with fugitive businessman Low Taek Jho in defrauding the companies.

At each of the phases mentioned above, 1MDB and its subsidiaries would engage in dubious projects, where money was raised using government guarantees and a portion subsequently siphoned off with the help of the defendants.

Najib allegedly approved or facilitated the companies to enter into sham agreements to create a circuitous trail of money to facilitate or conceal the misappropriation of 1MDB funds.

The plaintiffs also claim that Low — or Jho Low as he is better known — had the authority to issue instructions and speak on Najib’s behalf to the board because of his personal relationship with the former PM and his family. “When Jho Low’s instructions on behalf of Najib in relation to the affairs of 1MDB were verified or checked with the former premier, Najib would confirm those instructions as being issued by him.”

Najib, 68, is presently on trial for 1MDB-related offences. In the civil suit, the plaintiffs also contend that he disregarded his obligations under Article 117, and abused his powers in exercising his public functions to maliciously commit fraud and misappropriation, resulting in the fraudulent transfer of funds and losses to them.

They contend that Najib should have foreseen the losses incurred due to such acts of misappropriation during each of the phases, losses that every Malaysian now has to bear. They also claim that Najib abused his position in causing further losses and hence, they are entitled to aggravated and exemplary damages because of his actions in obstructing and hindering investigations into the wrongdoings, whereby he obtained secret profits for himself or his agents.

In the statement of claim, the companies allege that the Pekan MP had refused to answer or had given misleading answers in parliament on the company’s financial position. They further allege that Najib had taken advantage of his position and power to influence, facilitate and cause fraud so that management complied with his stated intentions that ran contrary to 1MDB’s corporate objectives, national interests and the interests of Minister of Finance Inc, to benefit his stepson Riza Aziz, Jho Low and others.

It was pointed out that in some meetings between Najib and the 1MDB board or its senior management, Jho Low also attended those events at the former premier’s invitation, and participated in them even though he held no official post in the group.

“Jho Low’s instructions and actions on behalf of Najib in relation to 1MDB affairs were consistent with Najib’s own exercise of authority and his actions in relation to 1MDB. He also ensured Jho Low’s proxies like Loo, Geh and Nik Faisal are appointed to monitor the management and implement key decisions to his (Najib’s) wishes.”

The claim against Najib is for breach of duties, fraud, breach of trust, negligence, knowing receipt, fraudulent misappropriation and misfeasance in public office.

Geh is alleged to have abused his position, breached his contract and acted in negligence in relation to the bond money raised for 1MDB’s power plant purchases, where a substantial portion of the 2012 bond proceeds, amounting to US$1.367 billion, was paid to Aabar BVI (a fake company set up to mimic the real Aabar).

As general counsel, Loo is alleged to have breached her duties to the company. A US Department of Justice filing claimed that she had misappropriated US$5 million of the 2012 bond proceeds for unjust enrichment in the purchase of a Madison Park, New York, condominium. She is also alleged to have played a role in confusing the board, claiming that Aabar BVI was Aabar PJS even though they are separate entities, resulting in the transfer of 1MDB funds to Aabar BVI.

Meanwhile, Tang is said to have misrepresented the 1MDB board on the PetroSaudi joint venture that led to US$700 million being transferred to Goodstar, a company Jho Low controlled.

Tan and Beng are accused of playing a role in preparing the “Joint Venture Agreement with PetroSaudi International (PSI)” dated Sept 18, 2009, that led to a dubious venture between PSI and 1MDB.

Radhi and Nik Faisal are charged with failing to properly advise the 1MDB board on the company’s further investment in PSI, resulting in the transfer of US$830 million to PSI, which was never recovered.

High Court judicial commissioner Atan Mustaffa Yussof Ahmad has instructed the lawyers of Radhi, Tan and Beng to file their defence while Najib has already entered an appearance through his lawyer Tan Sri Muhammad Shafee Abdullah.

The other defendants Loo, Tang, Geh and Nik Faisal have gone missing but attempts continue to be made to serve them the documents.

This civil suit is one of six filed by 1MDB and its subsidiaries (see table).