Najib ‘hoped’ SRC would do better with second RM2b loan 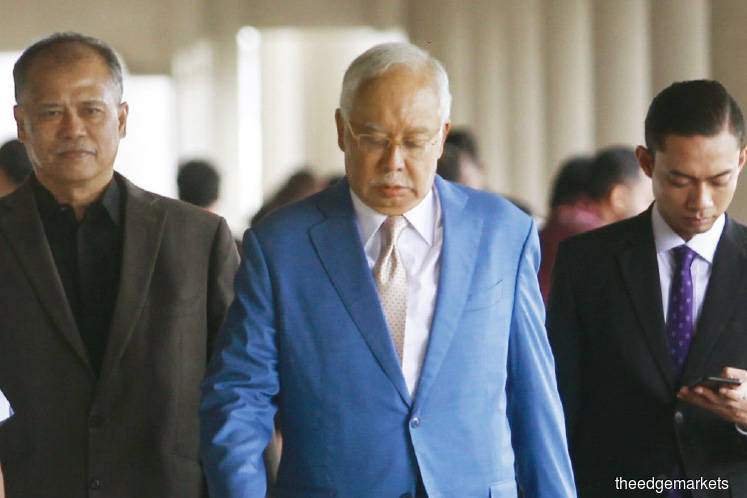 Najib says he appointed SRC board members because they were all highly qualified in the corporate sector. Photo by Mohd Izwan Mohd Nazam

Najib, who was answering questions by Deputy Public Prosecutor (DPP) Datuk V Sithambaram, said the second government guarantee was approved by the cabinet and endorsed by him because he had an indication SRC was making inroads into multiple renewable energy investments.

Sithambaram had asked Najib if he knew SRC’s progress before approving the second SRC loan.

“There were some indications that they (SRC) were venturing into renewable energy such as coal and needed additional capital to secure the investment,” Najib said.

However, he agreed with Sithambaram’s suggestion that there was no concrete evidence of any progress since SRC’s inception in 2011 and that he was not informed of any progress.

Sithambaram then suggested that Najib should have recused himself in the cabinet meeting which approved the government guarantee for the second KWAP loan as his presence as prime minister could have influenced the other ministers, to which Najib disagreed.

The DPP also suggested that Najib, having had several meetings with ex-SRC managing director and chief executive officer Nik Faisal Ariff Kamil, did not inform the cabinet that the company had not done anything with the first KWAP loan, to which Najib agreed.

Najib also testified that he had hoped by approving the second loan, SRC would be able to do better.

Sithambaram had asked him if he was personally aware of the shambles SRC was in after the first loan had been approved, as it had done nothing with that money.

“I was hoping it would do better,” Najib responded.

In the latter part of the afternoon’s cross-examination, Sithambaram asked Najib about the competency of SRC’s board as none of them had had experience in renewable energy.

Najib said that they were all appointed by him because they were highly qualified in the corporate field.

Sithambaram, however, stressed that none of them had any experience in this particular sector.

“They were all highly qualified in the corporate sector, this is why they were chosen to be on the board,” Najib reiterated.

Sithambaram then told Najib that the board had not done its job and asked him if they had ever reached out to him or if he had ever summoned a meeting with the board to discuss the company’s investment plan involving the funds borrowed from the government.

“They did not, but I trusted them completely,” he said.

Sithambaram: On the investment of RM4 billion in government funds, did you ever ask to meet the board of SRC?

Sithambaram: It appears that SRC has never passed any board minutes or shareholder resolutions? You don’t think you should’ve asked to meet the board then?

Najib: The MoF Inc should have alerted me if there was a problem.