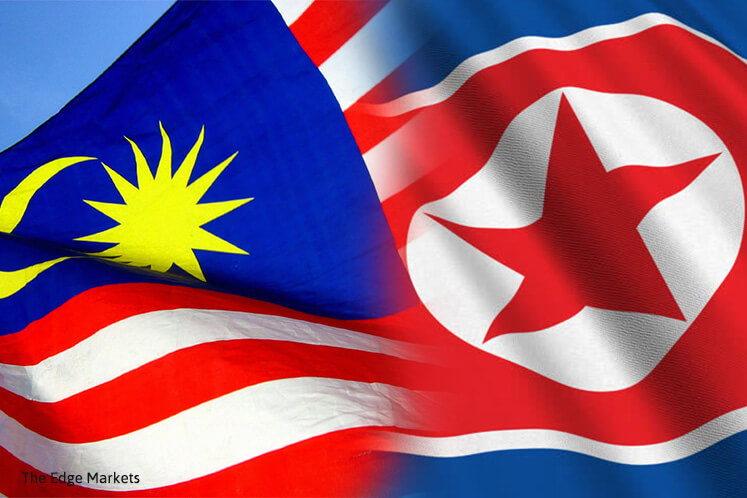 KUALA LUMPUR (March 31): Three North Koreans wanted for questioning in the murder of Kim Jong Nam, the estranged half-brother of their country's leader were believed to be returning home with the coffin of the victim on Friday after Malaysia agreed a swap deal with the reclusive state.

Photographs obtained by Reuters from Japan's Kyodo news agency show Hyon Kwang Song, the second secretary at the North Korean embassy in Kuala Lumpur, and Kim Uk Il, a staff member of North Korea’s state airline Air Koryo were on a flight from Kuala Lumpur to Beijing on Thursday evening.

The pictures match those released by the Malaysian police earlier. The coffin carrying the body of Kim Jong Nam was also believed to have been on the same flight, though this has not been confirmed by authorities.

Malaysian media reported that a third North Korean, Ri Ji U, also known as James, who had been hiding with them at the North Korean embassy in Kuala Lumpur was also allowed to go home.

The three men and the coffin were expected to be transferred to a flight to Pyongyang.

Malaysian authorities released Kim's body on Thursday, in a deal that secured the release of nine Malaysian citizens held in Pyongyang after a drawn out diplomatic spat.

Kim Jong Nam was killed in Kuala Lumpur International airport on Feb 13 in a bizarre assassination using VX nerve agent, a chemical so lethal that it is on a UN list of weapons of mass destruction.

Malaysian prosecutors have charged two women — an Indonesian and a Vietnamese — with killing him, but they are regarded by South Korean and US officials as pawns in an operation carried out by North Korean agents.

North Korea's young, unpredictable leader, Kim Jong Un, had issued a "standing order" for his elder half-brother's assassination, and there was a failed attempt in 2012, according to some South Korean lawmakers.

Malaysian police had named eight North Koreans they wanted to question in the case, including the three believed to have been given safe passage to leave Malaysia.

Of the others, police believe four fled Malaysia on the same day as the murder and another was held for a week before being released due to insufficient evidence.

Malaysia, which had previously friendly ties with North Korea responded with a ban of its own, but was left with little option but to accede to North Korea's demands for the return of the body and safe passage for the three nationals hiding in the embassy.

Malaysian Prime Minister Datuk Seri Najib Razak issued a statement announcing the return of the body, but did not mention Kim by name.

"Following the completion of the autopsy on the deceased and receipt of a letter from his family requesting the remains be returned to North Korea, the coroner has approved the release of the body," Najib, who is currently on an official visit in India, said in the statement.

North Korea has maintained that the body was that of Kim Chol, the name given in the passport carried by the victim, and not Kim Jong Nam.

Najib's statement did not mention the safe passage given to the North Koreans that police had wanted to question, but it did say the travel ban on North Koreans leaving Malaysia had been lifted.

North Korea also released a statement saying both countries managed to "resolve issues arising from the death of a DPRK national."

"It is a win (for North Korea), clearly,” Andrei Lankov, North Korea expert at Seoul’s Kookmin University said on the swap deal.

"I presume the Malaysians decided not to get too involved in a remote country's palace intrigues, and wanted their hostages back."

The episode, however, is likely to have cost North Korea one of its few friends.

“For all intents and purposes, I think this relationship is going to go into cold storage for a very long time,” said Dennis Ignatius, a former Malaysian diplomat.

Kim Jong Nam, the eldest son of the late North Korean leader Kim Jong Il, had spoken out publicly against his family's dynastic control of the isolated, nuclear-armed nation.

For the past few years he had lived in exile in the Chinese territory of Macau, and his family has gone into hiding since the murder.

The nine Malaysians who had been trapped in Pyongyang were brought home to Kuala Lumpur early Friday morning on board a small Bombardier business jet operated by the Malaysian air force.

"We won't deny that when the DPRK government imposed the travel ban which prevented (us) from leaving, we were very concerned especially since we had committed no wrong," Mohd Nor Azrin Md Zain, one of the returning diplomats, said.

"During that time we were not particularly harassed by DPRK authorities," he added.

According to the Plane Finder tracking website the Bombardier took off from Pyongyang at the same time that the Malaysian Airlines flight MH360 left Kuala Lumpur for Beijing.

The Malaysian Air Force crew dressed in civilian clothes as a "precautionary step" for the mission, pilot Hasrizan Kamis said.