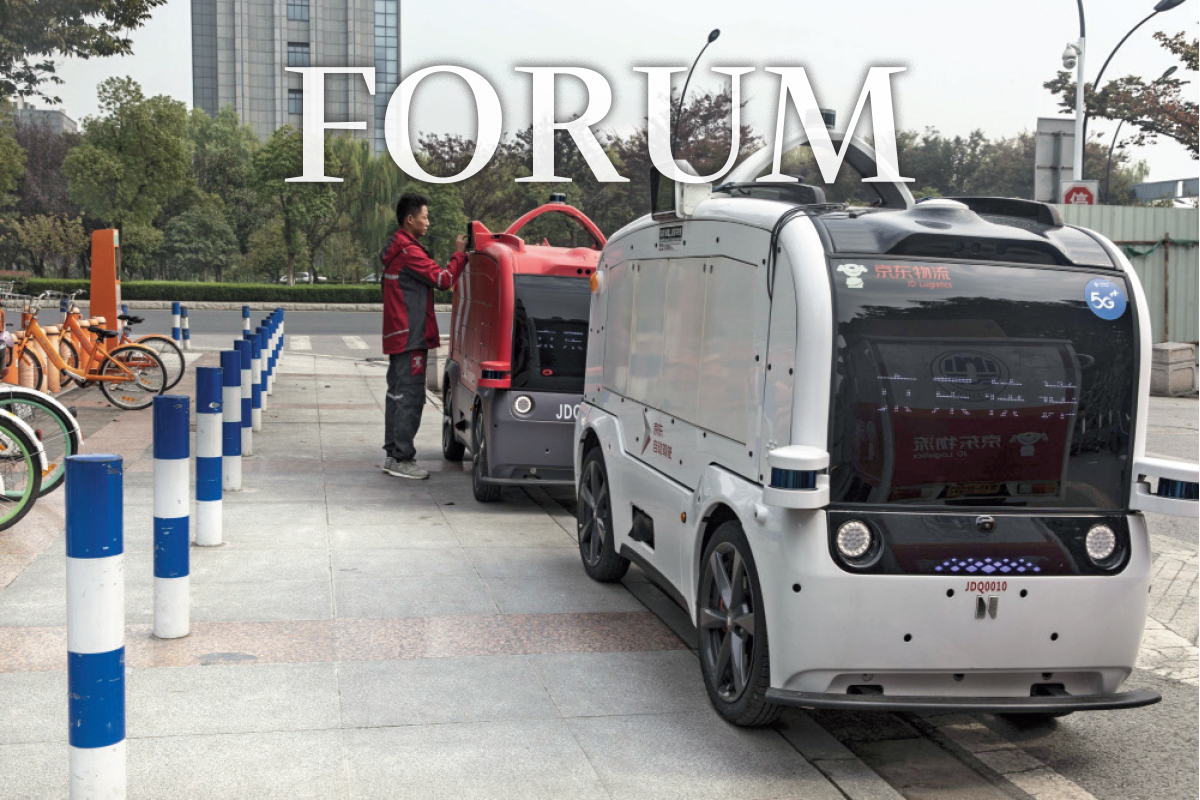 Whether you think it is a boom or bubble, the surge in tech stocks has focused minds on how technology can impact our lives. But stock prices are volatile and for all we know, there could be a horrible correction in the tech sector some day. After all, that happened when the infamous tech bubble burst at the turn of the century. However, while billions of dollars of market valuation were wiped out then, the actual scientific advances and resulting innovations continued to grow, eventually triggering transformational changes in whole industries — and creating true value in the market.

Our view is that we are on the cusp of a similar surge of technology-driven transformation, one that could unleash tremendous value creation. The implications are generally positive for global economic growth, but there are bound to be some painful dislocations. Policymakers in our region will have to devise ways to respond to these opportunities and risks.

The revolutions in technology are everywhere

Much of the commentary on technology is focused on IT-related developments — the stunning improvements in computing power and high-speed computer networks, the advances that enable that progress (cramming more and more computing power into ever smaller chips, for instance, or progress in communications technology such as 5G networks) and the IT-related spin-offs such as big data, artificial intelligence and robotics. These are indeed important and allow for new gadgets and services that are now ubiquitous in our lives, from smartphones with ever-expanding features to autonomous vehicles and the Internet of Things (IoT). And these changes then pave the way for new business models such as ride-hailing, e-commerce, social media platforms or even snazzier video games.

We are likely to see even more progress in IT-related areas. For example, quantum computing is set to drive rapid improvements in computing speed and power. Last September, IBM outlined a road map for developing a quantum computer with 1,000 qubits (a measure of computing power) by 2023, a huge increase from its current largest quantum computer, which has just 65 qubits. And that will help spur accelerated growth in a range of other areas such smart automation, financial technology (fintech) and blockchain.

However, technological progress goes well beyond the IT areas. We are now witnessing revolutionary changes in many other areas that are likely to have as consequential an impact on our lives as the IT-related changes. The following is just a sample of the game-changing progress in a range of areas.

•      An energy revolution: In renewable energy, for example, solar and wind power can now hold their own in terms of economic viability against conventional sources of electric power. These alternative energy sources will see explosive growth in the coming years. And soon, we will see even more forms of alternative energy such as hydrogen added to this list.

•      A medical revolution: We have also seen how progress in biomedical sciences enabled vaccines to be developed against Covid-19 in record time. That progress is probably only the tip of the iceberg of breakthroughs in medical care. In the coming years, we are likely to see artificial organs, new and more effective drugs and therapies for cancer and diabetes as well as better medical devices that will enable better and less invasive treatment of ailments.

•      A revolution in materials: The headway made in nanotechnology led to the invention of nano-materials, which can make all kinds of equipment much lighter, including aircraft, automobiles, luggage and power tools. Scientific progress is allowing for more uses of graphene, a super-lightweight material that is 200 times stronger than steel. Another newly discovered material, Perovskite, is a light-sensitive crystal that will allow the efficiency of solar panels to double.

We could go on but the point is clear — the world will see dramatic and accelerating progress in a range of technologies that will have progressively wider impacts on our lives.

Why this technological progress will blow past expectations

This series of technological revolutions will provide an uplift to global economic growth that is likely to be well above what most forecasters have estimated, for a number of reasons.

•      Several of the technologies described above are reaching their take-off points, where after many years of slow progress and adoption, the stage is set for explosive growth — whether it is in renewables, quantum computing, nano-materials or meat substitutes. That means their impact on consumer behaviour, business models and costs will become much more visible and, therefore, the spillovers into economic growth will be all the more powerful.

•      As these technologies reach critical mass, each of them will need new ecosystems that in turn require growth-promoting investments in many ways. For example, renewable energy needs different physical infrastructure from conventionally generated electricity. That is why China is spending billions in constructing ultra-high-voltage electricity grids. Other countries will have to follow suit very soon or risk being left far behind.

The new industries will also need entirely new supply chains of their own. Take electric vehicles — the components used are different from cars that use the internal combustion engine. That explains why battery technology has suddenly come into focus with a huge effort to build “giga” factories to assemble the batteries that electric vehicles will need and which are also needed to support solar and wind power. Also, each of these new industries will need an entirely new set of overhead services. As the IoT connects more and more devices in almost every piece of equipment in our daily lives, for instance, the risk of hacking or other cyber mischief will grow. So, the cybersecurity industry will have to expand massively to ensure that the IoT rollout is not marred by extensive damage caused by hackers.

§  Finally, a number of the new technologies provide benefits to yet other technologies. They are enablers in the sense that they allow progress in separate areas to accelerate. Take 3D printing. The basic technology has been known for decades, but it is only now that it is gaining a more extensive foothold in manufacturing because enhanced computing power and advances in new materials have enabled costs to plunge. So, the prices of 3D printers had fallen from US$20,000 in 2010 to about US$700 in 2020. Another example is in agriculture — new farming techniques will utilise advances in other areas such as robotic technology and the development of sensors for temperature and moisture as well as aerial images and GPS technology to produce a revolutionary leap in productivity.

In other words, we have a series of new technologies whose benefits feed into other new technologies, producing the kind of positive feedback loop that leads to unexpectedly rapid acceleration. Technological adoption is going to be much, much faster than most of us expect and that means much more rapid economic growth. The adoption of new technology has also been hastened as a result of the pandemic, which galvanised businesses into exploring new ways of doing things. Now, it will be even faster.

Profound implications for the world economy

First, economic growth is going to be much faster. In recent years, many observers have been concerned about the proliferating headwinds to economic growth. They talked about ageing and more slowly growing populations that would limit labour supply, or the massive load of debt that, by burdening the balance sheets of corporations and governments, would limit investment. And there is the growing protectionism and inward policies that have diminished the synergies created by globalisation.

We believe that technical progress is likely to more than offset these headwinds, allowing global growth in the post-Covid era to be faster, not slower. New technologies will open up bountiful new business opportunities for the daring. Higher productivity will reduce unit costs and raise profitability — the expectation of higher returns will spur a new surge of investment.

Second, the downside of accelerating growth will be accelerating dislocations. Faster-than-expected development of new industries will mean faster-than-expected displacement of incumbent industries and companies. Power generation companies will be left with conventional power generation assets that have less or no value — the so-called stranded assets problem. The same could happen to automobile companies that have been slow to switch to electric vehicles. Many of these companies could go bust.

Workers in the dislocated industries will lose jobs and may not be flexible enough to be re-skilled for the new jobs that are being created at a rapid pace. At the country level, there could be disruptive changes in the structure of competitiveness. For example, 3D printing could make production of currently labour-intensive items such as shoes and toys competitive in developed countries, and cause production to be relocated from developing economies.

Third, it is not clear what the consequences might be for other economic variables. Some may argue that transformational changes such as these advances in technologies could cause prices to fall and produce deflation. But higher growth could also cause markets for labour and intermediate goods and services to tighten and so cause costs to rise.

Conclusion: what does this mean for our region?

The overall impact should be positive since we see global economic growth gaining speed. But because there are also the dislocations outlined above, there will be winners and losers. The winners — whether in our region or elsewhere — will be those countries that are well positioned to exploit the opportunities presented while also being able to mitigate the ill effects.

At the macro level, economies have to be made more flexible so they can nimbly adjust to these changes. This can be possible if governments work with the labour movements and business federations to work out how best to adapt so that everyone wins. One element of this adaptation may have to be more government spending on reskilling as well as on social safety nets. Investment promotion agencies will also need to be proactive to attract new industries to our region’s shores.

But ultimately, it is the bottom-up

adaptation at the micro level by companies that will be the key. Only the companies can detect at an early stage the changes in their industries and devise strategies to respond, not state planners. What policymakers need to do is to ensure that the ecosystem of financing systems, regulation and supporting infrastructure is in place to support this micro-level adaptation.

History shows that technological progress is not to be feared. So long as the right strategies are put in place at the macro and micro levels, the benefits should outweigh the downsides.