My Say: Winning the Covid-19 war 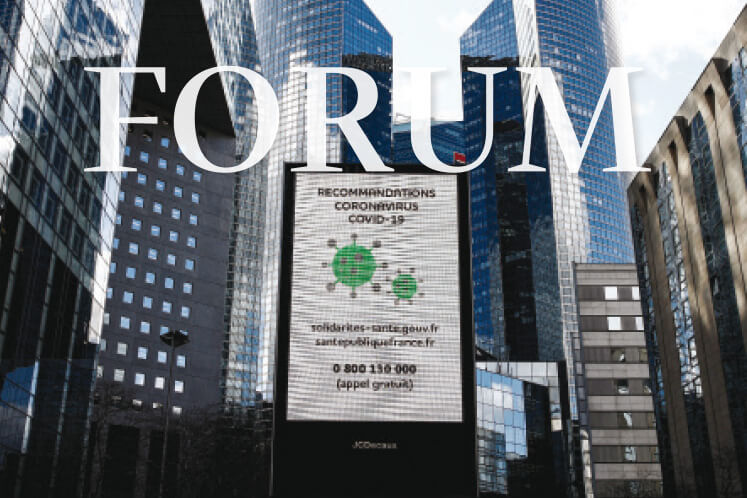 Covid-19 recommendations in Paris … at the global level, the epicentre has shifted from China to Europe, which is only in the acceleration stage — the same as Malaysia

There have been more than 300,000 Covid-19 cases and almost 15,000 deaths from the disease across 190 countries around the world so far. A frightening aspect of the pandemic is that it has taken less than three months to get us to where we are today, testifying to the highly infectious nature of the novel coronavirus.

At the global level, the epicentre has shifted from China to Europe, which is only in the acceleration stage — the same as Malaysia. Things will get worse before they get better.

Another aspect of the pandemic is that its containment, the slowing down of its spread, requires people to stay at home, which effectively slows down economies to a crawl. The predicament is that the public health solution to the pandemic is tantamount to an economic shutdown! Therein lies the major challenge in this war against this unseen enemy. It is inevitable that the choice is to contain the virus first, even if that means paying a high economic price to avoid a calamity if the virus spreads throughout the population.

It is a foregone conclusion that Malaysia’s economy will contract in 2020; it is only a question of by how much and for how long. According to the Malaysian Institute of Economic Research (MIER), the Malaysian economy may contract by about 2.9%, relative to 2019, in 2020, a year when the International Monetary Fund has said the global economy will be in recession. The IMF put forward a tentative view that the global economy should start recovering in 2021 but there is no consensus on that. These economic projections are made on the assumption that the pandemic, or the worst of it, will end before the year is out.

The conclusion is that we are looking at the resulting economic crisis in the 12 or possibly 24 months beyond the pandemic. Two things will happen then: unemployment will rise and asset prices of all asset classes will fall. There will be significant income as well as wealth effects that will define the depth of the crisis, quite unlike previous crises.

Businesses will fail, which will contribute to unemployment, and how well businesses rebound will determine the extent of the unemployment and growth problems going forward. Reflating asset prices and getting to new overall pricing levels will see a major change in the ownership structure and in the distribution of such ownership. Since this is a global pandemic in a globalised economy — a world of linked supply chains spread geographically — the disruptions will be interconnected, which implies a certain synchronicity in how economies will be affected and recalibrate themselves later on.

It will be a deep and fundamental economic downturn and how long it will last will depend on how we handle it and plan ahead. This is not just a demand side contraction that requires some tinkering to patch it up in order to obtain a quantitative growth target. This is far more fundamental than that — this will change the economic landscape significantly.

But before we get to that part of the crisis, let us look at the immediate impact of the Movement Control Order (MCO), which has negatively impacted the lives of millions of households whose incomes and savings levels were low even before the Covid-19 epidemic. The MCO has eliminated incomes for many small traders who provide affordable sources of food and other supplies. For example, the pasar tani/malam — a major distribution channel for food and supplies in the country — is not only a source of income for the small traders but also a source of affordable food and provisions for a great many households. The MCO has literally created a survival crisis for millions.

There are also those who have lost their jobs due to the pandemic, including those who have been put on half-time work or no pay leave. Frontline industries affected by the almost immediate cessation of travel — aviation and tourism-related activities — would have already faced a significant drop in demand in the first quarter of the year and they would be forced to lay off workers as a result of cash-flow pressure.

There must be immediate measures to put cash in the hands of these affected individuals to sustain them through this trying period. Those implemented by other governments, for example the UK, should be considered and followed immediately. The Bantuan Sara Hidup database as well as e-Tunai Rakyat programme, launched in the last budget, represent a ready-made infrastructure to implement such cash transfers.

The package announced by the UK includes, for example, guarantees of 80% of all employee wages of up to £2,500. This will take a big load off businesses while ensuring employees are assured of income. Under Malaysia’s present MCO guidelines, businesses have to shoulder the wage burden of all employees. The government also recently announced that the Socso Employee Retention Programme could be expanded significantly to compensate for job and income losses, which need to also include the self-employed, one of the more vulnerable groups in the labour market.

It has to be said that the measures based on the Employees Provident Fund, whether a reduction in contributions or permission to withdraw contributions early, are ineffective, given the highly skewed subscription to, and ownership of, the fund. The vast majority of subscribers will not have enough when they retire, what is more when they are still working. It will not help those who need help the most. Most of those in the gig economy do not even have EPF accounts.

Businesses too have been badly affected and are facing cash-flow problems. Support needs to be directed to them to ensure they weather the MCO. This is especially true of small and medium enterprises — collectively the biggest employers in our nation with a workforce of close to 10 million and bank borrowings of more than RM300 billion. The recent announcement by Bank Negara Malaysia is a bold move — it has directed banks to provide a six-month reprieve on loan repayments by individuals and SMEs and facilitate the restructuring of loans to large corporations.

Another quick way of providing relief to SMEs is via the use of the government guarantee of loans extended by banks. This was successfully and efficiently used during the 2009 crisis via Minister of Finance Inc company, Syarikat Jaminan Pinjaman Perniagaan Bhd, which manages the guarantee and works with the banks. Some RM10 billion of government guarantee was used then to facilitate the disbursement of RM13 billion of credit that benefited thousands of SMEs. At the time, the guarantee was for 70% of the loans and the credit assessment and administration was done by the banks subject to their own guidelines and using their own funds. The government pays out only if the loans go bad and the guarantee is called by the banks.

Meanwhile, the MCO has been extended for another two weeks and it is uncertain what lies beyond that. What is certain, though, is that millions of people have been affected by it almost immediately and there must be intervention to tide them over to survive, literally, the MCO. Small businesses cannot survive such reductions in sales and be expected to carry the costs. A cash crunch can very easily lead to insolvency, which thereafter leads to bankruptcy and the loss of jobs.

More strategic and structural policy interventions are required to address the Covid-19 pandemic — for one, to preserve the food supply chain — but for now, the government must address the immediate effects of the MCO comprehensively and decisively, communicate the measures taken clearly and implement them in a way that improves the integrity of institutions in this country and the people’s confidence in them. Maintaining the fabric of our society and the unity of the country are as important as managing the pandemic and its consequences.

I will not comment on how the pandemic itself is being managed because in my view, the Ministry of Health is doing a sterling job — it had a plan for this sort of contingency and it activated the plan. It has exemplary leadership, great organisational capability and the discipline to execute it. The MoH must be protected and allocated all the resources it requires.

These are abnormal times, comparable to wartime. Normal considerations — of managing growth targets, fiscal constraints, budgetary deficits, debt ceilings or ratings agencies — do not apply. Malaysians come first. We should mobilise all the country’s resources to do whatever it takes to protect the rakyat.

Beyond these immediate steps, which are meant to ensure our survival, will be the equally daunting task of figuring out what the post-Covid-19 world will look like and how to position ourselves favourably in that world. That will determine the robustness of the trajectory we will be on.