My Say: Southeast Asia must prepare to weather the coming storm 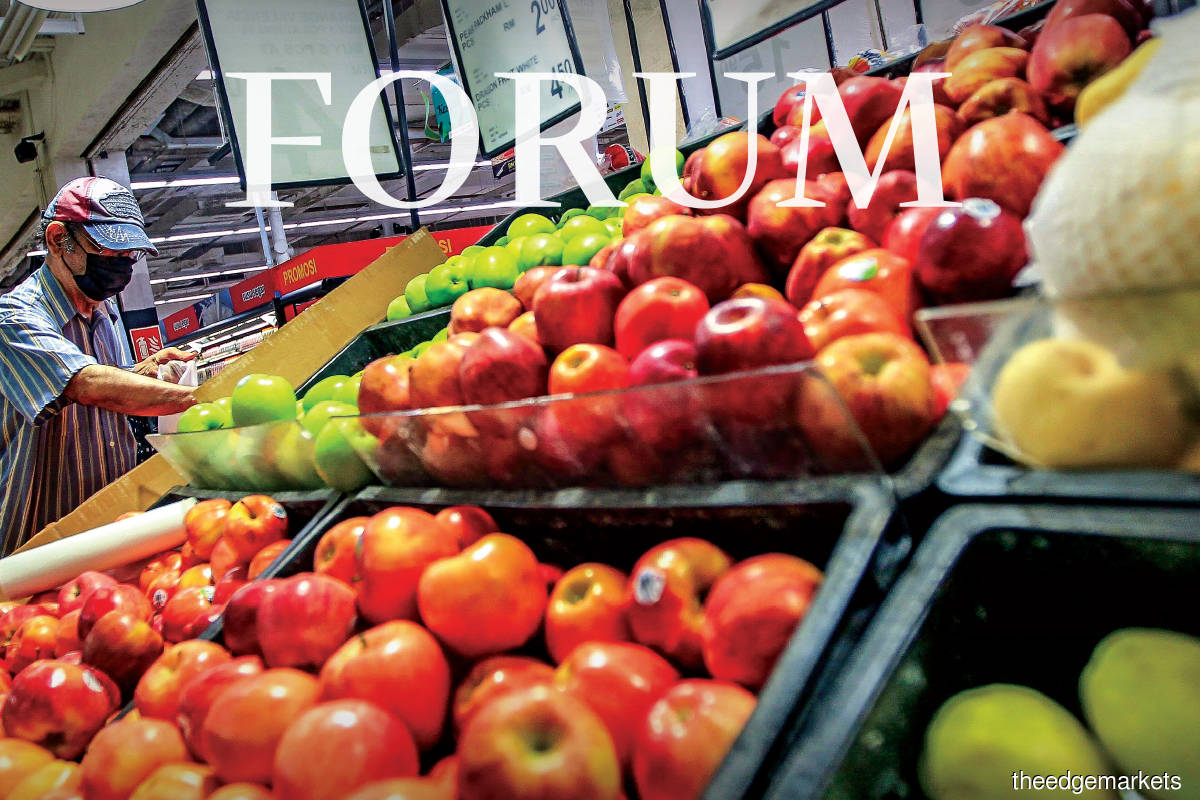 There are signs that inflation in our region will peak and then start to fall. Inflation in emerging Asia outside China is mainly driven by supply shocks, not driven higher by excess demand. (Photo by Shahrill Basri/ TheEdge)

It is getting rough out there in the world economy. The ongoing energy price shock will hurt everyone, probably tipping the European economy into a recession while imposing pain on many a poor country. Rising interest rates will further drag global economic growth down, potentially trigger more corrections in asset prices and perhaps push a number of emerging economies into crisis as well. If China’s stimulus does not stabilise its economy, things could turn even uglier. And, to top it all, no one knows for sure what new upheavals the current geopolitical tensions might bring along.

In the midst of all the ructions the world has suffered this year, Southeast Asia’s economic performance has actually held up reasonably well: Economic growth has been fairly steady, the pick-up in inflation has not been as alarming as elsewhere, and while currencies have weakened, that has not triggered financial difficulties as they did in the past. The region has some good things going for it from a structural perspective. But whether it can remain an ocean of relative calm will ultimately depend on how soundly managed government policies are likely to be. So far, the prospects appear to be reasonably good.

A sea of troubles outside the region, and it is not likely to get much better in 2023

The headwinds are intensifying. Our region must expect trouble on several fronts.

First, the major central banks are not going to relent on their monetary tightening. They realise that they have lost credibility by allowing inflation to surge to multi-decade highs and believe that they must demonstrate resoluteness even if economic growth suffers. Thus, we should expect a difficult environment for the region for the rest of this year and much of 2023 as tight money combines with high energy costs to undermine global economic activity:

•     An across-the-board slowdown in the world economy: The sharp spike in energy costs will reverberate throughout most economies, raising costs of production for businesses and eroding consumers’ real spending power. No one will be spared. The American economy can probably avert a big downturn, given that it is less exposed to the energy shock. But the European economies are likely to suffer a fall in output through much of 2023. So, our region must expect demand for exports to weaken, maybe even fall.

•     Financial disturbances are likely to proliferate. Already emerging economies such as Sri Lanka have tumbled into outright crises and observers fear that many others such as Egypt, El Salvador, Pakistan and Tunisia could also spiral downwards. Beyond emerging economies, we are likely to see sharp corrections in the valuations of assets, which benefited from more than a decade of ultra-low rates and borderline insane levels of quantitative easing. Take real estate as an example. This asset class has seen sustained increases for the past couple of decades of easy financial conditions. That cannot last and we must accept that a good part of these asset price increases will reverse. We are already seeing US housing begin to wilt as rates rise. That pain will spread to many other countries. Moreover, money will no longer flow so easily to start-ups, so we will see retrenchments in that sector as well. It will not be a pretty picture.

Second, China will remain a source of downside risks. Our best guess is that there will be enough stimulus to steady the economy but not enough to really charge it up. The result will be a modest rebound from the near-contraction in the second quarter of this year and growth of around 4% or 4.5% in 2023 as the step-up in infrastructure spending and other support measures take effect. But the improvement in headline economic growth will mask troubles on the ground such as more defaults and other financial stresses.

Third, as 2022 progresses into 2023, we should expect to see more tangible impacts on the global economy resulting from the geopolitical frictions among the big powers:

•   The expanding trade and investment restrictions imposed by the US on China and persistent fears of conflict over Taiwan will see more companies move operations out of China and Taiwan.

•    More generally, in an environment of great uncertainty, businesses and governments will seek security through diversification. Businesses will want to ensure that they are not dependent on just one or two suppliers, especially if they are based in potential war zones. Governments will become ever more concerned over the security of the supply of food, energy and components that are vital for the military effort — and will promulgate new policies and regulations to achieve that.

•     In addition, the sizeable increase in defence spending that the US, Japan, Germany and other European nations have committed to will be actually implemented. That may be a boon to defence companies but the general belief is that spending on military equipment is wasteful and eventually detracts from quality economic growth.

So, what happens to our region?

Recent data points to a number of trends that will shape the region’s prospects.

First, the latest data is already showing a loss of momentum in the factors that drive regional exports.

August was not a good month for the economies that the region sells to. Purchasing manager surveys showed companies slowing production, winning less new business and becoming wary of hiring more staff. What should worry us most are the signs of a slowdown in demand for electronics, which ultimately is driven by capital spending in developed economies. But the data in the US and Germany, for example, suggests that inflation-adjusted capital goods orders have fallen from their recent peaks in March this year. That should spell weaker demand for Asia’s machinery exports.

In fact, the leading indicators for electronics demand are already flashing warning signs. The latest S&P Global Electronics PMI in July was down markedly from June. New orders were shown contracting for the second consecutive month. This implies fewer overseas buyers for Asian electronics exports. The latest trade data for Taiwan and South Korea, bellwethers for Asia’s export performance, confirms that a slowdown in this key sector is underway.

Second, the data shows evidence of continued Asean resilience despite this bad news. Countries like Indonesia, Malaysia and Thailand enjoyed an uptick in overall new orders in August even as new export business slowed. That is because domestic demand is proving to be the saving grace for Asean economies. This is partly because savings accumulated during the pandemic remain high and are being spent. And this is why the purchasing manager indices for Indonesia (51.7), Malaysia (50.3) and Thailand (53.7) all showed expansion in August.

Third, the opening up of the regional economies now that the worst of the Covid-19 pandemic is over is also supporting a revival of activity. The obvious area that will benefit is tourism and the related sectors such as aviation and hospitality. This should be a powerful positive for growth. In Thailand, for example, the return of travellers to Thailand is surpassing expectations. More open borders also mean that labour shortages that are evident in Thailand, Malaysia and Singapore can be more easily overcome.

Fourth, there are signs that inflation in our region will peak and then start to fall. Inflation in emerging Asia outside China is mainly driven by supply shocks, not driven higher by excess demand. There is evidence to show that these supply side bottlenecks are likely to ease in the coming months. Note the following:

•    As output in many sectors of the regional economies is still below the levels indicated by pre-pandemic trends, there is some slack in the economy that will help restrain inflationary pressures.

•    Commodity prices are also softening as markets price in the global slowdown. Since hitting a post-pandemic peak of close to US$130 per barrel, crude oil prices have fallen by more than 25%. We see oil prices trading in the US$80-US$90 per barrel range in the near term. Food and metal prices have also eased considerably in recent months. Wheat prices, for instance, are now back to the levels that prevailed just before the Ukraine crisis began.

•    Supply chain bottlenecks are also beginning to ease, helping to relieve some of the pressure on supplies of goods. This is shown in the softening in intra-Asian freight rates amid weakening import demand in the region and particularly in China. The latest PMI survey also reflected an easing in delivery times of inputs and materials amid weaker demand prospects. Most notably, South Korea and Taiwan reported a softening of delivery times.

•    Against these upbeat factors, there is the risk that cuts to fuel subsidies that are necessary to maintain each country’s fiscal position would push up inflation. Indonesia has just raised the prices of subsidised fuel for petrol and diesel by about 30% to IDR10,000 and IDR6,800 per litre respectively. That will show up in a sharp rise in inflation in September to above 6% we believe from 4.7% in August. In Malaysia, Finance Minister Tengku Datuk Seri Zafrul Abdul Aziz spoke of a new targeted scheme to channel fuel subsidies to the lower-income group. Once this is implemented, we are likely to see Malaysian inflation tick higher.

The net effect of all this is that inflation rates in the region should begin to taper off after rising a bit more through the next few months. Regional inflation will probably remain elevated compared with previous years — and is likely to still exceed central banks’ targets. So, monetary tightening is set to continue as we move into the early months of 2023 before pausing.

Putting it all together, we can say the following. Essentially, several turning points are approaching for the region:

•    First, economic growth will slow in the coming year to year and a half. But it is important to look under the hood and see the divergent patterns among various sectors: the trade-related sectors will be where the deceleration will be most evident. Sectors related to tourism may enjoy a good bounce while business activities such as in construction, which were constrained by labour shortages, will also see a pickup. Parts of the economy that rely on consumer spending will also gain momentum as pent-up demand is released. The overall effect is that the region will still enjoy growth in 2023 and avoid a recession.

•    Second, inflation rates will rise in the near term because of cuts in subsidies and the lagged effects of increases in the cost of inputs. But overall, inflation should peak by year-end in most of the region.

•    Third, the above has implications for monetary policy. Central banks will persist in raising rates in the coming months before pausing in early 2023.

•    Fourth, the region’s policymakers will have to start planning strategic responses to the changed and probably harsher global environment. Singapore has begun that process with its Forward Singapore exercise. The Southeast Asian governments have to consider how their countries and Asean as a whole should adapt so that they can successfully leverage trends like the likely reconfiguration of supply chains while buffering their economies against risks such as rising protectionism and the fallout from big power rivalries.