My Say: Risks from big power frictions in Asia could subside 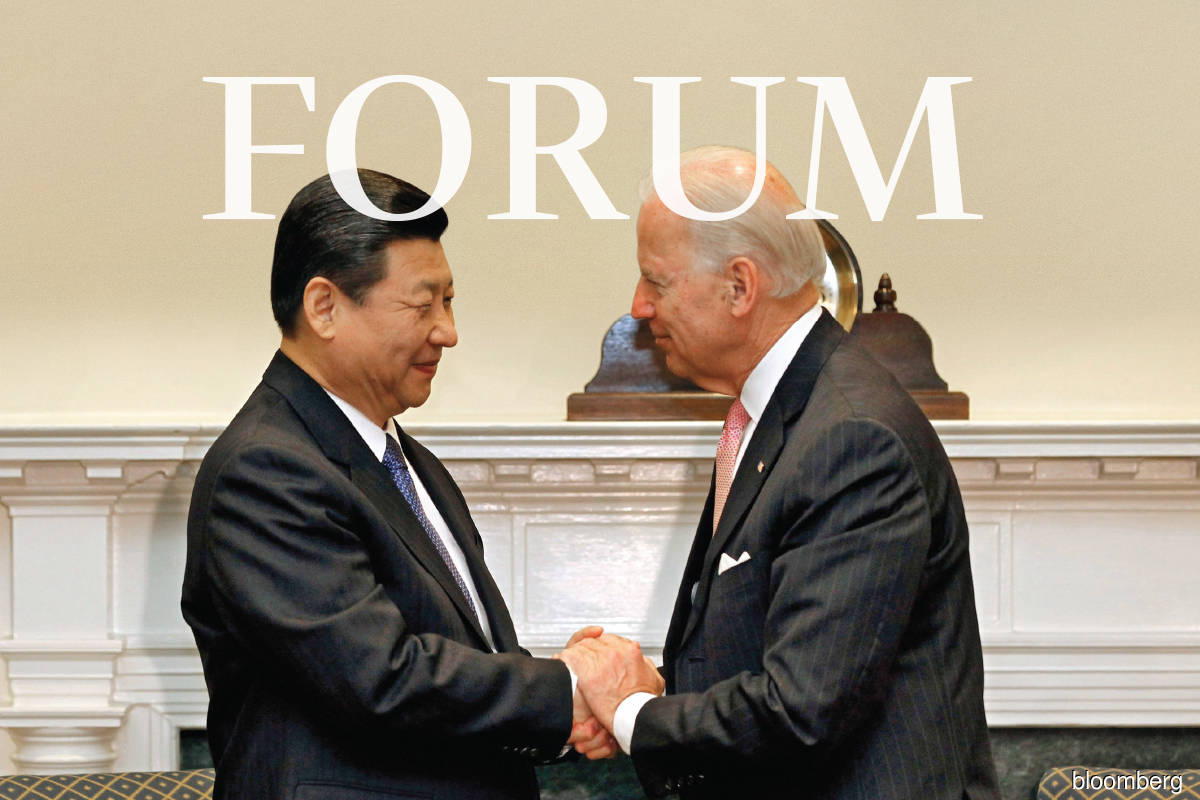 If talks between US President Joe Biden and his Chinese counterpart, President Xi Jinping, are successful, Southeast Asia would be in a better position to extract benefits from the big powers competing for the region’s affections

There have been many reasons to worry about the worsening ties between China and the US, the two big powers whose actions have outsized impacts on the world. But it is a particular concern for Southeast Asia because this region has become one of the main arenas for that contention to play out. So, any change for the better in the relationship should be welcomed.

We believe that the US-China relationship is now entering a new phase, one that might reduce some of the bigger risks. This does not mean that the two powers will fundamentally resolve their differences. But even as their contestation continues for a prolonged period, they are preparing to work out new approaches so that their contestation is conducted more safely. For this region, this is a positive and might even yield some benefits in the economy.

What has changed in the US-China relationship?

The past five years have seen relations between China and the US turn more hostile on several fronts — and with major implications for Southeast Asia. In the economic sphere, a trade war and growing restrictions on technology and investments have marred their once burgeoning relationship. The result was dented business confidence and lower investment in the US — which eventually hurt the region’s exports as growth in the US slowed.

More worryingly, there has also been contention over critical sea lanes of communication such as the South China Sea and the Taiwan Straits, where their air forces and naval units sometimes come into uncomfortably close contact. The South China Sea is this region’s backyard so more tensions there are not welcome.

Another issue of concern is how the mutual understanding that provided a foundation for a healthy relationship between the two big powers has frayed. China believes that the US is out to sabotage its rise and suspects that the US is encouraging Taiwanese independence. The US believes that China is a revisionist power, one that seeks to rework the international order that the US helped set up after World War II into one that favours authoritarianism and where the US is displaced from its pre-eminence. China’s apparent support for Russia has deepened these suspicions. The result has been the worst US-China relationship since the late 1960s.

Hopes that President Joe Biden’s accession to office in January 2021 would lead to a reset in the relationship were soon dashed. Tariffs that former president Donald Trump had imposed remained in place. Administration officials sounded a hawkish tone on China, explicitly naming it a challenger to the US. Not surprisingly, China responded robustly. The first few high-level exchanges between the US and China were marked by hostile rhetoric, with state councillor Yang Jiechi’s pointed remarks against the US in his first meeting with US national security adviser Jake Sullivan a standout example of this tough approach. For months, China rebuffed American requests for substantive negotiations on how to manage their competition, arguing that the US had to agree to some basic principles first.

What has changed now is that China has overcome its reluctance to engage, resulting in the most intensive series of high-level exchanges between the two big powers in almost two years. The frequency and intensity of these meetings suggest that a serious effort is underway to reset the relationship.

These talks culminated in US secretary of state Antony Blinken announcing over the last weekend that Biden and his Chinese counterpart, President Xi Jinping, will converse by phone soon. Blinken and Chinese foreign minister Wang Yi had a five-hour-long discussion to lay the groundwork for this call, which would be the first direct contact between the two leaders since March. Note that Blinken’s talks with Wang followed a series of high-level engagements between China and the US in recent weeks.

•    In the economic sphere, Chinese vice-premier Liu He had his first call since October 2021 with US Treasury secretary Janet Yellen. Liu termed the call “pragmatic and frank”. They are believed to have discussed economic and tariff issues, which is significant given the expectation that the Biden administration will soon reduce some of the tariffs that ex-president Trump had imposed on China.

What does this mean for US-China ties?

The increased frequency of high-level meetings involving foreign policy, national security, economics and defence officials marks a change in the dynamic of the US-China relationship. After a year and a half of testing each other, we believe that the two sides are now prepared for talks aimed at achieving substantive results, not just preparatory ones or, as in the case of the earliest exchanges after Biden took over, tough and uncompromising rhetoric.

What the US and China seem to be aiming at is an understanding that ensures that their more intense strategic competition does not lead to unwanted crises or clashes. It is in the interests of both countries, whose leaders are engrossed with domestic economic and political challenges of their own, not to be distracted by an unwanted crisis in their relationship. Both sides accept that the dangers inherent in a much more competitive relationship must be contained by establishing a framework to manage that competition.

What will not change, however, is the increased contestation between the two nations, especially in East and Southeast Asia. The US has shown that, despite the many weaknesses and differences within the Western alliance, it can muster a powerful response against rivals when pressed. The punishing sanctions imposed on Russia by the US and allies probably surprised the Chinese.

China would also have observed that the efforts by the Western alliance to meet the Chinese challenge across military and economic fronts was becoming better organised, as seen by the West’s latest challenge to China’s Belt and Road Initiative (BRI) — the Partnership for Global Infrastructure and Investment (PGII). Nato has identified China explicitly as a strategic competitor, while the network of US alliances in the Pacific is growing and becoming better organised as well.

China is buying time to recalibrate its approach while not giving up on its determination to edge the US out of the western Pacific, or its ambitions to eventually force a reunification of Taiwan with the mainland. China is likely to adjust its strategy in the light of recent developments since the Ukraine war began. We expect it to launch major initiatives to reduce its vulnerability to Western sanctions or pressure while stepping up its military build-up and wooing of Southeast Asian political elites.

Conclusion: What are the implications for this region?

The changed dynamic in US-China relations will have important implications for the region.

In the security area, for example, ways could be found to ensure that naval and air force activity by both nations within the same area do not lead to an accidental clash. Hotlines and other communications channels can be established so that even if there were a clash, the incident would be very quickly cooled down and an escalation into an outright clash or crisis can be avoided.

In the economic sphere, we expect some gestures from each side to improve the tone of the relationship. Although there is some resistance to it, it is likely that Biden will allow some of the Trump-era tariffs to lapse when they expire soon. China may respond with a similar reversal of some of the retaliatory tariff moves it undertook against the US.

However, what will not change is that the big power rivalry in the region will persist. This offers the region some opportunities, but there are also downsides.

First, what will suit the regional countries is a situation where the US and China balance each other in the region, but with limited risk that their operations in the region result in clashes that would destabilise the region. That would leave Southeast Asia with the optimal position — no single power dominating the region and able to bully or intimidate the smaller and less powerful nations but, at the same time, little material chance of conflict between the two in the region’s backyard. With both powers engaged and keen to win over the region, the regional countries would be in a better position to extract benefits from the big powers competing for the affections of the region. If the Biden-Xi talks are successful and their contention is better managed, then the region might well be in that sweet spot.

Second, the US and its allies are working at matching China in terms of the economic outreach to the region. Domestic politics will not allow this administration to cut meaningful trade deals that provide Asian exporters with greater market access, the thing they want most of all. But efforts will be made in other areas such as infrastructure, climate change mitigation and adaptation, and digitalisation. In response, we would not be surprised to see China enhance its BRI, perhaps as an extension to Xi’s proposal for a new Global Development Initiative. Because Southeast Asia straddles the critical lanes of communication for China and the US, there will be special efforts to win over the region. Malaysia and Indonesia are particularly well-positioned, and could perhaps receive extra love and attention.

Third, the big power contention will intensify over time even as the risks of a military clash are better managed. The US and China have assured the region that they do not seek to pressure any country to take sides. Well, of course, they will say that but no one should believe it. The two big powers are too sophisticated to pressure the region crudely or blatantly. But there will be subtle and indirect efforts to get countries in the region to sign on to particular initiatives or schemes. There will be an immense propaganda effort as well — some of it benign and open through accepted channels such as aid agencies and think tanks — but other efforts may be less benign, involving more intelligence penetration and schemes to buy over political and business elites.

In short, East and Southeast Asia will remain the main arena for US-China contestation, but the risks of an unintended escalation into a serious confrontation will likely be reduced if the Biden-Xi talks go ahead and are successful, as we expect.