My Say: Reset the 12MP’s approach to poverty 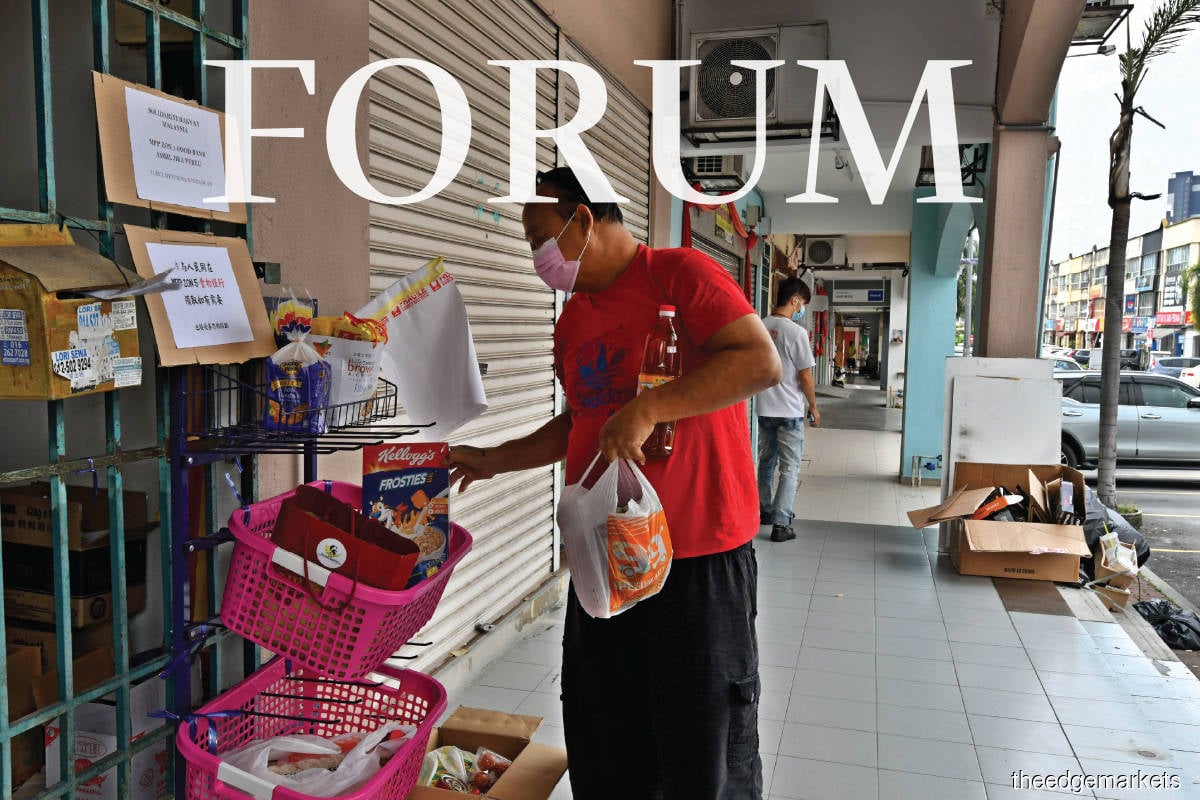 The official 2016 poverty rate for Kuala Lumpur was 0%, yet 27% of households earned less than the Bank Negara estimate of the living wage for the city in 2018 (Photo by Sam Fong/The Edge)

The New Economic Policy (NEP) had two prongs — eradicating poverty and eliminating identification of race by economic function. Not only has the former received less attention than the latter, but poverty data, for many years, has been distorted by definitions and concepts that deviate from international best practice. At the same time, policies, budgets, programmes and projects have suffered from bureaucratic and political capture.

Today, Malaysia faces its biggest challenge since the NEP. At the macro level, we have a precarious economic recovery that needs to take into account the aftershocks of the pandemic, higher debt level and shrinking fiscal space. At the micro level, recent indicators of socioeconomic well-being, such as unemployment and underemployment, bankruptcy data, SME (small and medium enterprises) closures, inflation and lower growth prospects, show the continuing extensive damage to the nation from the pandemic. The hardest hit will be the poor and B40 group.

It is gratifying that Prime Minister Datuk Seri Ismail Sabri Yaakob, in a recent press interview, noted that because of the pandemic, the landscape has changed.

“There are people in the B40 (low income) category who are now hardcore poor. Some previously in the M40 (middle) income bracket are now in the B40 group.

“Under the 12th Malaysia Plan, the target is to eradicate hardcore poverty by the end of 2025. To do this, mechanisms will be made more effective, and several policies, strategies and initiatives from the previous Malaysia Plans have been improved and included in the 12MP.”

So, can the PM’s political rhetoric be successfully translated into action? Despite the proliferation of projects — a total of 167 programmes across all ministries and departments, involving 13.7 million aid recipients with a value of RM28.6 billion — we find that the 12MP fails to address the actual poverty landscape and is doomed to disappointment if it fails to correct the anomalies and shortcomings identified below.

Malaysia’s Five-Year Plans have always incorporated discussions of poverty. When the concepts and methodology employed to derive the various poverty line income (PLI) measures and the estimates of poverty incidence are flawed, they fundamentally affect the resulting policies.

The 12MP has the objective of elimination of hardcore poverty. This term is not found in international use. The World Bank and United Nations Development Programme — two global agencies at the forefront of analysing poverty — use the concepts of “absolute” and “relative” poverty. There are no valid reasons why Malaysia has deviated from standard international terminology.

Earlier plans had estimated PLIs based on proxy measures to calculate household consumption. A two-part estimation procedure was utilised: valuation of food consumption was done based on notional caloric values; this was augmented by the addition of an allowance for other necessities. This approach understated household consumption and thus set a low bar for the PLI.

The second fundamental flaw concerned the unit of analysis to obtain the poverty headcount. The recommended and globally accepted unit used in poverty analysis is the individual. However, past plans have used the household as the unit, thus deviating from internationally accepted norms. It is important to take note that households vary in size across the urban-rural and ethnic dimension. Not taking into account these differences is not only unprofessional but also raises serious questions about the objectivity and integrity of the resulting estimates. That absolute poverty remains under-enumerated and highly elevated points to policy failures, incompetent implementation and failure of the political will to adjust.

In 2019, UN Special Rapporteur Philip Alston reported that Malaysia’s method of measuring poverty produces a national poverty rate of just 0.4%, the lowest in the world, suggesting that less than 25,000 households are in poverty. He noted that the claim reflected a statistical sleight of hand that has had extremely harmful consequences.

The government initially defended the existing poverty line but relented in the face of wide support for the UN report’s recommendations. It led to a revised set of poverty lines based on data drawn from household income/expenditure surveys. The revised poverty lines reflected how the then existing poverty line contributed to the official narrative that poverty was largely a rural phenomenon confined to small numbers while ignoring poverty in the urban areas. For example, the official 2016 poverty rate for Kuala Lumpur was 0%, yet 27% of households earned less than the Bank Negara estimate of the living wage for the city in 2018.

The Alston report called for reforms of the social protection system to improve the well-being of the least well-off members of all racial and ethnic groups. The 12MP document offers no indication that such reforms will be introduced. It makes no reference to how the government intends to include citizens of all ethnicities who are currently systematically excluded from official poverty figures, neglected by policymakers and often effectively barred from access to basic services. It is important to point out that relative income inequality between ethnic groups has narrowed since the adoption of the NEP in 1970 although bumiputeras still had a higher poverty rate than the Chinese or Indian populations.

The latest data from the 2019 Household Income and Basic Amenities Report conclusively shows how poverty affects all communities and emphasises the importance of race-blind, fair and equitable poverty alleviation policies.

The fact that the great majority of non-Malay households are located in urban areas also points to the possible underestimation of the actual severity of poverty incidence among the non-Malay communities. Lessons from the past

Poverty eradication programmes in Malaysia have always been devised top-down, imposing Putrajaya’s view of what is best upon the ground. These projects are plagued with mismanagement, wastage, abuse of incumbency and leakage of funds. There has been a predominant emphasis on building the bureaucratic agencies and infrastructure rather than investment in community development projects at village and community levels. Much poverty eradication spending is thus ineffective, with evidence of misspent funds clearly seen across the country.

There is much inter-agency duplication, and un-coordination, with different government organisations trying to meet designated KPIs (key performance indicators) rather than solving problems. Very few projects have started with formal situation audits of community needs, with strategies formulated to emancipate the poor from their current poverty situations.

To improve effectiveness in tackling issues of poverty in its different forms and manifestations across the country, agencies must spend time empowering respective communities to communicate their needs, wants and aspirations. Programmes must spring up from grassroot communities according to specific local and situational requirements, and espoused needs and aspirations.

Until the earlier top-down bureaucratic approach of the previous Malaysia Plans is rejected, there will continue to be umpteen examples of failed poverty alleviation projects and hundreds of billions of ringgit wasted.

Our proposed bottom-up approach, which provides material and financial foundations for development-driven poverty alleviation especially directed at the eco-economy of impoverished areas, can be the game changer in ensuring real progress is made in the national poverty alleviation programme.

It will also provide the catalyst to changing mindsets and to releasing the productive forces which have been marginalised or co-opted by political and other intermediary proxies which stand to gain most from the latest round of 12MP projects and programmes using conventional strategies.

We reiterate: Continue with the same approach and there will continue to be a wastage of funds, leakages and communities remaining in poverty.

Given the devastation to the economy from 18 months of restrictions and the reduced fiscal scale for poverty budgets, this should be the main policy and programming thrust of the 12MP.

•    Consolidation of poverty programmes. This would lead to strengthening the safety net to protect the poor, reduce costly overheads and generally improve the delivery of services. It would also result in a reduction of leakages;

•    Strengthening the governance aspect relating to projects. Projects should be awarded following competitive bidding rather than on a negotiated basis. This would reduce opportunities for corruption;

•    Establishment of a Parliamentary Select Committee on Rural and Urban Poverty to examine the true extent of poverty, its various causes and to recommend changes to the 12MP poverty alleviation programme with definite goals, targets, measures and deadlines; and

•     Establishment of a poverty alleviation monitoring council comprising non-official NGO representatives and respected experts to work with the Parliamentary Select Committee and poverty alleviation agencies to ensure that goals and targets are met.

Appeal to our legislators

The prime minister and other legislators coming from impoverished or deprived backgrounds should know the hardship and challenges that poor people face. They should also be aware of how and why the enormous sums expanded on the country’s poverty programmes since Independence have failed to bring about the positive results and success that have been promised by successive past governments. The 12MP provides the opportunity to break the vicious cycle of poverty in the nation but only if there is the concomitant political will and determination and the pursuance of the new policy setting and programming outlined here.

Lim Teck Ghee is a former senior official with the United Nations and World Bank. Ramesh Chander is a former chief statistician of Malaysia and a senior statistical adviser at the World Bank in Washington, DC. Murray Hunter is an independent researcher and former professor at the Prince of Songkla University and Universiti Malaysia Perlis.