My Say: Considerations for a post-pandemic aviation industry in Malaysia 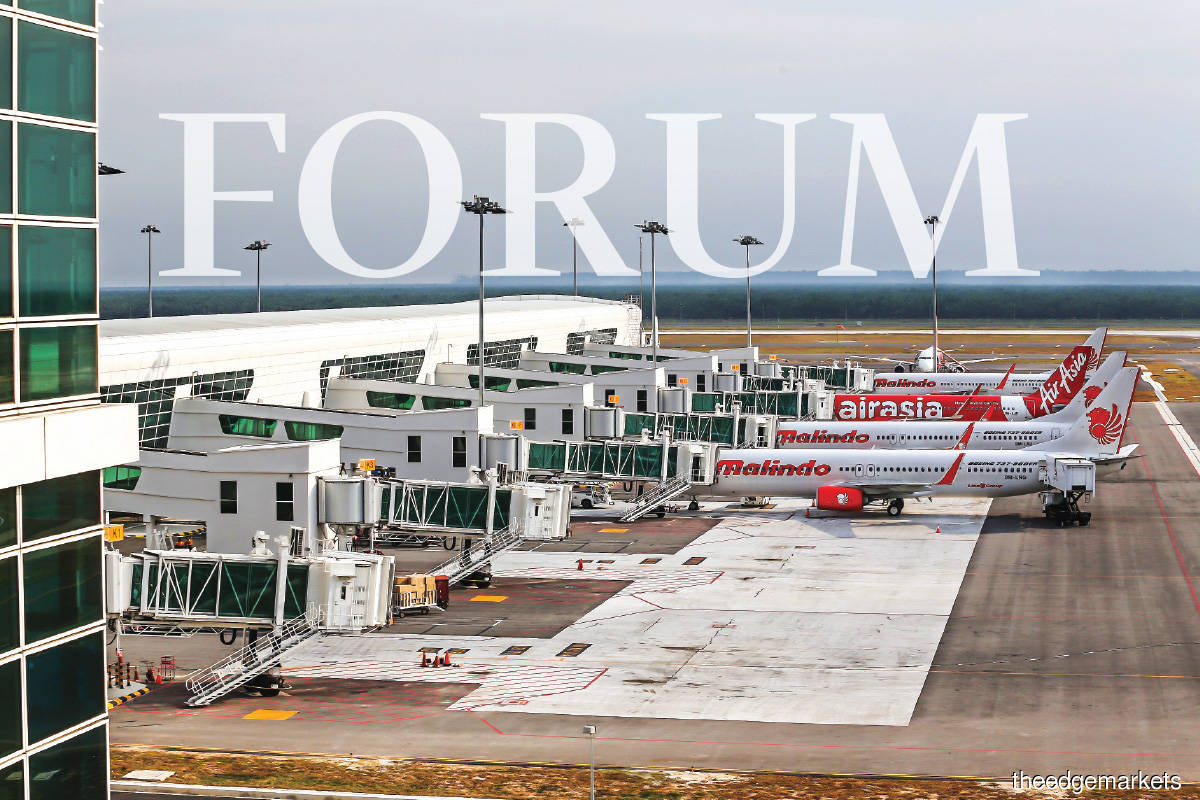 Travel restrictions during the Covid-19 pandemic have severely impacted the aviation industry. The International Air Transport Association (IATA) estimated airline losses globally at US$118.5 billion in 2020, a year when revenue shrank by 60.8% to US$328 billion, mirroring the 60.5% reduction in passenger numbers to 1.8 billion.

Airport Council International (ACI) likewise estimated a reduction in airport revenues globally for 2020 by US$111.8 billion or a 65.0% reduction in comparison to 2019. Last year was certainly the worst year in aviation history.

Looking forward, IATA expects continued losses with forecasted 2021 airline revenues globally growing only to US$459 billion (about RM1.9 trillion), well short of the US$838 billion achieved in 2019. Global passenger levels in the meantime are expected to grow to 2.8 billion, still 1.7 billion less than that recorded in 2019.

As vaccinations progress, air travel will gradually recover. How will the industry look like in Malaysia once we are past this difficult period?

Even prior to the pandemic, the Malaysian aviation industry was in bad shape. Malaysia’s licensed passenger airlines under the AirAsia group, Malaysia Airlines group and Malindo Air were already loss-making in 2019.

Malaysia Airports Holdings Bhd (MAHB), operator of 39 of 42 airports in Malaysia, was profitable but is staring at a host of policy uncertainties that could destabilise the airports sector in the future. These include the Federal Aviation Administration (FAA) downgrading the Civil Aviation Authority of Malaysia (CAAM) as a technical regulator, thereby downgrading Malaysia as a market, and the mandate of the Malaysian Aviation Commission (Mavcom) on airport funding and its linkage to fees being subject to political interference. And the list goes on.

This article touches on two key considerations for a post-pandemic aviation industry in Malaysia — Malaysia’s passenger airlines industry structure and the framework for airports operatorship — while highlighting policy options for the government.

Apart from the local carriers, there were over 70 foreign carriers operating at Kuala Lumpur International Airport in 2019. A handful of foreign carriers also operated directly to destinations such as Kota Kinabalu and Penang. These carriers serve direct flights to destinations primarily within Asia-Pacific. There are only a limited number of direct services to locations further west of Mumbai or further east of Tokyo, reflecting Malaysia’s limited allure as an international aviation hub in recent years.

As a result, the industry has become increasingly domesticated, with local carriers collectively serving 76.3% of Malaysia’s passenger market during 4Q2019. With domestication comes compressed margins.

In 2019, AirAsia Bhd (AirAsia) and AirAsia X Bhd (AirAsia X) — the only two publicly listed airlines in Malaysia — recorded net losses of RM283.2 million and RM520.6 million respectively, while also having capital commitments in the tens of billions. Malaysia Airlines in the meantime indicated its need for additional capital injections beyond the initial RM6 billion earmarked in its turnaround plan to keep it alive, while privately-owned Malindo Air in 2018 spoke of attaining its first year of profit “within three years”.

Quite simply, Malaysian carriers could not generate profits even in 2019. In 2Q2019, Malaysian carriers lost on average 2.7 sen for every one seat flown per kilometre. In other words, as a crude approximation, a 166-seat aircraft flying over 1,000km would lose, on average, RM4,500 for each flight. This deficit was wider than it had ever been in years.

One possible explanation commonly lamented is overcapacity, whereby the supply of aircraft seats far outstrips their demand, resulting in low yields or excessively low ticket prices. That airlines were ordering airplanes, adding capacity at a faster rate than demand growth is an irrationality that invited investigations in many jurisdictions including in Malaysia.

The average load factor for Malaysian carriers in 4Q2019 at 78.3% is lower than the break-even load factors of most airlines, which typically exceed 80.0%. This inevitably pressures ticket prices downwards to fill up seats.

Furthermore, low-cost carriers (LCC) have evolved into platforms designed to generate high volumes of traffic, with the data and captive audience arising from those volumes leveraged to market a wider range of auxiliary services, which in theory may be more profitable.

This phenomenon results in a situation where full-service carriers (FSC) and LCCs both fly passengers and cargo, but yet may be operating different businesses. The high volumes targeted by an LCC could be a means to an end, albeit a different end to that of an FSC.

Airline consolidation is an option. Whether a merger of Malaysian carriers would pass muster with regulators in Malaysia, however, remains to be seen. Due to the small number of airline groups in the country, any merger could result in a significant lessening of competition. Restricting the number of carriers in a market to reduce the likelihood of overcapacity would similarly be inadvisable as such a step would result in consumers enjoying lesser choice.

The airlines sector also risks distortion if the government continues to subscribe to the concept of a “national carrier”, a concept that is not necessary today to serve the country’s economic interests. Is government ownership meant to generate financial returns, or for “strategic” reasons?

Malaysia will no doubt benefit from the presence of a strong network carrier that facilitates domestic and international connectivity but the consideration is how those objectives can be carried out efficiently. Continued participation by the government for vague “strategic” pretences crowds out the potential entry of more efficient airlines.

Thus, where no anti-competitive behaviour is established, the most appropriate governmental approach over the long term is to allow market forces to take its course. Especially when consumer travel patterns will likely be uncertain for the medium term, markets should be left to figure out that “correct” water level.

From a national policy perspective, airports have a more central role in influencing the connectivity of a country. Airlines come and go, but airports are location-specific. In addition, airports interface with the full gamut of stakeholders who facilitate the connectivity of a location: local and foreign carriers, ground handlers, regulators, other transport links and related service providers.

MAHB, the corporatised segment of the former Department of Civil Aviation that managed airports, now a publicly-listed entity whose shareholders include major domestic institutional investors as well as foreign funds, is the near-monopoly operator of airports in Malaysia under the 25-year operating agreements (OA) signed with the government in 2009, forming the commercial basis of the company.

Crucially, the arrangement allows for a cross-subsidy mechanism to take effect, where profitable airports such as KLIA, Penang International Airport and Kota Kinabalu International Airport — which service higher-paying international traffic — would fund the operations and maintenance of loss-making airports all over the country. This cross-subsidy model is not a sustainable model without proper determination of a long-term airport funding model linked to service levels and airport charges.

Key to charting out the airports sector post-pandemic is an appreciation of the inter-relatedness of structural issues within the airports sector. Questions concerning airports operatorship structure, number of airports in Malaysia, funding of airport capital expenditures, airport charges, airport service levels, multi-terminal integration, whether MAHB and other private airport operators should be allowed greater commercial freedom and whether airports should treat FSCs, LCCs and hybrid carriers differently are all linked to one another.

There must also be an airport master plan that adopts a nationwide multi-modal transport perspective incorporating major initiatives in road and rail infrastructure in the last 30 years — with consideration for planned investments such as for the East Coast Rail Link, Pan Borneo Highway and those related to the Penang Transportation Master Plan — integrated within an overall National Physical Plan. There should hence be a stop to this state-based view of airports and disasters such as the two disconnected terminals at KLIA, which should be avoided in the future.

Unlike the airlines sector, there is a greater need for active government policymaking in airports. The country will benefit from the implementation of an integrated airports sector development model designed at the national level that addresses these policy issues, coupled with transparent frameworks that facilitate airport funding, service quality, charges and fees.

The Ministry of Transport had in 2020 indicated the development of a National Airports Strategic Plan (NASP), while Mavcom, prior to the government’s decision in December 2019 to close it, had developed those supporting regulatory frameworks.

Role of the government

There is a long list of other decisions that need to be addressed by the government to shape a post-pandemic aviation industry in Malaysia. These include the reopening of international borders, the recovery of CAAM as a regulator, governance and funding of Malaysia’s air traffic control for the long term. Other matters are facilitating Malaysia’s air cargo sector within the context of a wider logistics industry, the development of an active business jets hub and Malaysia’s environmental commitments to the Paris Agreement.

It underlines the need for the Ministry of Transport to have a strong policymaking capability and an appreciation for the segregation of roles of a policymaker, regulator, shareholder and operator. Short of which, there is a risk that the policy confusion in Malaysia’s aviation industry of pre-pandemic days will continue, perpetuating or making worse the position from before.

Azmir Zain is a chartered accountant and currently a director of a family investment vehicle. Nungsari A Radhi is an economist. Both of them were formerly with the Malaysian Aviation Commission and Khazanah Nasional Bhd.