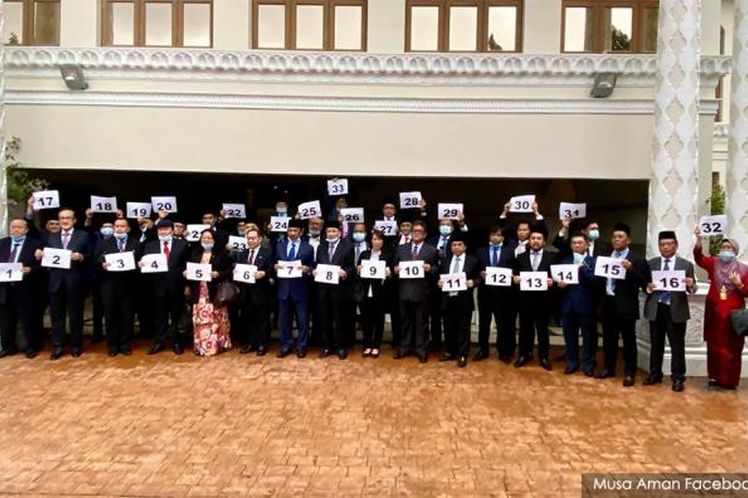 KOTA KINABALU (July 30): Former Sabah Chief Minister Tan Sri Musa Aman was stopped by police while he was on his way to the State Palace to meet Sabah Governor Tun Juhar Mahiruddin this afternoon.

Harian Metro reported that at about 3.50pm, Musa and his convoy were stopped at a police roadblock outside the palace. Lawyers accompanying him had attempted to negotiate, but they were all not allowed to enter the palace.

The Sungai Sibuga Assemblyman was reported to have been on his way to persuade the Governor not to dissolve the State Assembly for a snap State election.

Musa claims he has 33 State Assemblymen backing him to form a new State Government.

"We will ask our lawyers to look into this to see what we can do.

"Maybe we will (try to) appeal to the Governor if the Assembly need not be dissolved," he said at a press conference today which was broadcast by Astro Awani.

At 6.10pm, Malaysiakini reported that Musa posted a photo on Facebook as proof that he has the numbers.

The photo showed Musa and various Sabah Assemblymen holding up placards with the numbers 1 to 33.

He again insisted that the Governor had a constitutional duty to consider his bid to form the State Government.

"But if it's true the State Assembly has been dissolved, I honestly say that we will fight in the coming election to give the people of Sabah a new Government that is stable and fights for the interest of all Sabahans," he said.

At 12.10pm, Chief Minister Datuk Seri Shafie Apdal had announced the dissolution of the State Legislative Assembly to pave the way for a State election, which has to be held within 60 days, Bernama reported.

Earlier, Mohd Shafie had an audience with Tun Juhar at Istana Negeri here, and a vehicle carrying the chief minister was seen entering the palace at 8.25am.

Shafie said he had sought and obtained the consent of Tun Juhar to dissolve the State Assembly.

“I will still be performing my duties as the Chief Minister during the period when the State Assembly is dissolved,” he told a press conference at the Sabah State Administrative Centre here, after meeting State Assemblymen and Members of Parliament from the Government bloc.

Following that announcement, Musa had questioned the need for snap polls.

"There are three more years (before the term expires) why dissolve the assembly? Is this for the people's interest or personal interest?

"If it's the people's interest, there is no need for fresh polls. This is wasting time and money, especially now with the COVID-19 pandemic," he said, Malaysiakini reported.

The dissolution of the state assembly comes some 26 months after Shafie, the Warisan president, was appointed as the Chief Minister on May 12, 2018.

In the 14th general election (GE14), Warisan won 21 state seats while its allies from Pakatan Harapan (PH) won eight — six by DAP and two by PKR.

However, the total of 29 seats won by Warisan and PH then were short of the simple majority required to form the State Government.

The Warisan-led bloc then gained six seats through defections by Barisan Nasional assemblymen, boosting its share to 35 of the 60 seats in the state assembly and giving it the right to form the state government on a simple majority.

Following that, Shafie was sworn in as the 15th Chief Minister of Sabah at Istana Negeri on May 12, 2018, replacing the BN and STAR coalition led by Musa as the state government in a matter of 48 hours.