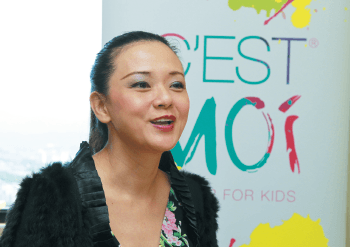 WHEN Jessica Tang first pitched the idea of a skincare and cosmetics line-up for children to fellow mums, she found herself in quite a quandary.

“I was ridiculed to the point of being called crazy but my intention was not to sell vanity. It was to cater to a need — the performing arts,” the sales and marketing director of C’est Moi Pte Ltd says.

Tang, a mother of two young daughters and a teenage son, relates her experience when her eldest, Annabele, then five, was very involved in gymnastics and dance performances.

“As a parent, it was clear to me that children love the dance floor. And when they are on stage and in the limelight, they need proper make-up, but there were no brands formulated specifically for their skin.

“Because she needed to put on make-up, there was an incident when Annabele broke out in red bumps that took two weeks to subside. So I thought of working on a product that catered to the delicate skin of children. And if it’s safe for children, it is also safe for adults,” Tang says with glee, in an exclusive interview with The Edge Financial Daily recently.

Thus began the three-year journey of coming up with C’est Moi (French for “it’s me”).

In her first market survey, Tang discovered how adults of different age categories responded to the idea. Those in their 30s were keen while couples in their 40s, while agreeable to the idea, limited children wearing make-up only to performances.

“Those in their 50s were saying ‘kids can use my make-up’ and it was ‘not a drop of make-up for children’ for those past 60. But children, especially those taking to the stage, want to emulate performers and the available products were harsh on their skin, so I pondered seriously about creating a brand new category,” she shares.

Tang had working experience with big brands like Hermes, Givenchy and Paco Rabanne before she joined forces with her husband in toy distributing firm Camtec in 1997. Camtec wholly owns C’est Moi and Tang says both companies have children at heart.

“In reaching the final decision, it was not a question of doing something good or bad but the need to sell from the heart because I knew the desire wouldn’t last long if I didn’t follow it through,” she adds.

Formulated in Europe, C’est Moi’s products are free of parabens, phthalates and other synthetics harmful to children’s skin. Instead, they are packed with 97% natural products which comprise fresh fruit cells and minerals.

“It was quite a journey from finding laboratory facilities who shared the same passion and vision to deciding on the packaging, the brand, and finally setting up shop in November (2014) at C’est Moi’s ‘box’ outlet in Metro Centrepoint, Singapore,” she said, adding that she set a very stringent criteria to go by as far as the products and packaging and brand were concerned.

“I wanted to see kids take to wearing it, so it was good to hear one coax his friend, ‘This is different!  You don’t feel anything!’

“I also didn’t want it to have too much of an adult or a childish feel to the packaging, and the brand had to be one with attitude because while I wanted it to be cool, I didn’t want it to be ‘against school’ because I myself am a very traditional mother,” Tang said.

The plan was to launch C’est Moi in the United Kingdom eventually because “London is the hub of theatre and musicals and generally all stage performances” but the brand had to make an impact on home ground first.

“The greatest mission of C’est Moi is to teach children and their parents about skincare — that is a fact — and to address the teenage market which doesn’t care about skincare. It is especially needed now when pollution is high and the ultra-violet rays from the sun are more powerful,” Tang adds.

Tang reports of positive response in Singapore, and the Malaysian market can order C’est Moi online as the e-commerce function will be in operations starting March. Tang also shares that she is laying the foundation so the brand can be exported to the UK sometime this year.

At this juncture, C’est Moi and the need for proper skincare is being introduced in performance schools, but where the masses are concerned, Tang is depending on the social-media front for marketing besides the typical beauty magazine advertisements. This will include YouTube beauty tutorials  catering to children — maybe starring her own daughters and eventually some of their friends.

“I think the best spokespersons about this product are kids themselves and word-of-mouth works just as well,” Tang adds.