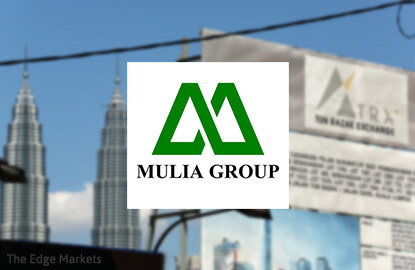 INDONESIA’S Mulia Group is seeking some RM1.8 billion in financing from Malaysian banks for the development of its Signature Tower building in Tun Razak Exchange (TRX), Kuala Lumpur, sources say.

It is, however, not certain if it has had any success as most Malaysian banks are understood to be wary due to the project’s link to the troubled 1Malaysia Development Bhd (1MDB). Additionally, banks are increasingly cautious about lending to the property sector, given the glut of office space in KL.

The development of TRX and Bandar Malaysia is being undertaken by TRX City Sdn Bhd (formerly known as 1MDB Real Estate Sdn Bhd), which is the property arm of 1MDB.

Lenders that Mulia — Indonesia’s largest commercial property developer — has approached over the last few months for portions of the financing include Affin Bank Bhd, according to the sources.

Nonetheless, even as questions are being raised as to how the project is being financed and whether Mulia might end up financing it on its own, construction work on Signature Tower has already begun.

Mulia, when contacted, says the development has been progressing at a rapid pace but declines to comment on the financing aspect of the project. “At this point in time, we would like to reserve our confidentiality on those questions,” a spokesperson tells The Edge via email.

Expected to be the tallest building and centrepiece landmark of TRX, Signature Tower is touted to be a prime Grade A office space in KL. Estimated to have a gross development value of over RM3.5 billion, the project is slated for completion in mid-2018.

“Since executing its land S&P agreement last year, Mulia Group has been complying with its land and developmental rights thereunder. Works had been accelerated. The foundation mat pouring that was carried out and completed over a long weekend in May (this year) is ranked among the world’s largest continuous concrete pour. We are proud to acknowledge that our Signature Tower progress has been moving at a rapid pace,” the Mulia spokesperson says.

“Accordingly, we are well into the construction of the 92-storey superstructure. Mulia is also currently in discussions with many groups that have expressed strong leasing interest in what is recognised as an iconic financial centre project in Malaysia and globally.”

TRX City too declined to disclose Mulia’s terms of payment for the project or if it has received any payment from the group at all.

“Details of individual deals are part of confidentiality obligations. We are, however, pleased to report that Mulia Group has met its obligations under the agreement,” TRX City CEO Datuk Azmar Talib says via email, without elaborating.

He goes on to say that Mulia has so far completed eight basement and ground floors and is well into the construction of the 92-storey superstructure.

Apart from Mulia, other companies that have bought land in TRX include Lembaga Tabung Haji (1.6 acres for RM177.5 million), Affin Bank  (1.25 acres for RM255 million) and WCT Engineering (1.65 acres for RM223 million). In March last year, Australian property developer Lend Lease agreed to a 60:40 joint venture with TRX City to develop the lifestyle quarter at TRX.

The TRX development had yet to be revenue generating for TRX City as at its financial year ended March 31, 2015 (FY2015). This is because the disposal of land in TRX to investors is subject to the master developer completing the required infrastructure.

According to a report by The Edge in August this year, an official with TRX City said some of the land deals it entered into with investors have a long-term staggered payment period.

This begs the question as to whether Mulia got a same deal. Without details of its terms of payment with investors like Mulia, it remains to be seen when TRX City will start to recognise revenue from them.

Mulia’s land deal with TRX City was driven by its president-director and owner Eka Tjandranegara, one of Indonesia’s wealthiest businessmen. In Indonesia, the group owns iconic landmarks like Wisma Mulia and Wisma GKBI, malls, apartments and swanky hotels.

One of the reasons banks are cautious about financing property projects like Mulia’s at TRX, especially amid a sluggish economy, is that there is a huge oversupply of office space in KL.

Back in May, The Edge reported that Lembaga Tabung Haji was leasing out its office space in Menara TH Platinum at Platinum Park, KL, at way below market rates. At RM5 psf, it was arguably the lowest rent in recent times for a new Grade A office building located within the Golden Triangle, industry experts said at the time. It raised questions as to whether the office oversupply situation in KL was worse than thought.

Mulia has also approached several government-linked companies to take up space in Signature Tower but it is understood that most are reluctant to do so.

TRX City, which is ultimately owned by the Minister of Finance Inc, posted a net profit of RM380.6 million in FY2015 — less than half the previous year’s earnings of RM858.3 million.

Its revenue of RM478 million for the year came not from TRX or its Bandar Malaysia project in Sungai Besi, KL, but rather from the relocation of the Kuala Lumpur Air Force base from the old Sungai Besi airport in KL.