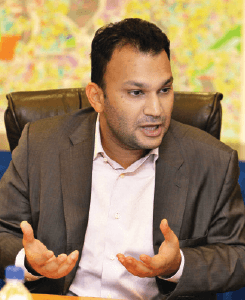 THERE is no risk of default despite the downgrade of the credit ratings of two Islamic debt papers issued by MRCB Southern Link Bhd as the company is not facing cash flow problems, says Malaysian Resources Corp Bhd (MRCB) group chief operating officer Imran Salim.

This is because the senior and junior sukuk will only become due in December 2016 and December 2018 respectively. MRCB Southern Link has also secured a RM60 million bank guarantee, which will be used to service the debts for the next 15 months, he says.

“There is no immediate default risk. The sukuk will only mature in 2016 and 2018, and we have explained to RAM Ratings how we may refinance the debts. We just started collecting tolls in August, so we will need some time to see the traffic numbers stabilise before we can refinance the debts.

“There is a two-year gap from now until December 2016. Within the period, the traffic numbers may increase, and we can refinance the debts if we want to. If our actual traffic is about 70% to 80% of the projected numbers, then refinancing is not an issue,” Imran tells The Edge.

RM845 million senior sukuk to BB1 from BBB3, and RM199 million junior sukuk to B1 from BB1. Both ratings carry a negative outlook. MRCB Southern Link is a unit of MRCB and the funding conduit for the 8.1km Eastern Dispersal Link Expressway (EDL) in Johor Baru.

According to the rating agency, since the commencement of toll collection on Aug 1, 2014, the daily traffic on the expressway has been significantly lower than anticipated due to unexpected developments in both Malaysia and Singapore.

From Aug 1, cars (excluding taxis) crossing over to Singapore using the Sultan Iskandar Customs, Immigration and Quarantine (CIQ) complex have to pay a total inbound and outbound charges of RM16.50, compared with RM2.90 previously.

To match the increase, the Singaporean government raised the toll rates on its side of the Causeway from Oct 1 to S$6.50 at the Woodlands checkpoint and S$6.40 at the Tuas checkpoint, from S$1.20 previously.

The republic also revised upwards its vehicle entry permit to S$35 daily per car from S$20 previously, effective Aug 1. Therefore, a car driver would have to pay S$41.50 a day to get into and out of Singapore, excluding the cost of Electronic Road Pricing in the city state.

RAM Ratings noted that the prohibitive cost of driving across the Causeway had resulted in the daily traffic for the first three months of tolling on the EDL coming in at 45,341 vehicles, compared with the previous expectation of 61,000 vehicles for 2014.

The firm explained that the downward adjustment is anchored on MRCB Southern Link’s weaker cash generation and the potential insufficiency of funds to repay the senior and junior sukuk should the traffic not recover.

“When you set up a toll, there will be a knee-jerk reaction. What transpired was, after the reaction, the traffic numbers had started to increase. But two months after that, Singapore decided to increase their toll rates,” says Imran.

“Then we had another knee-jerk reaction because of Singapore’s decision to increase the toll charges at the Causeway, so the number of vehicles getting into Johor dropped. People started to use public transport more than cars.”

However, Imran denies that MRCB Southern Link is facing a cash crunch. The company has obtained a RM60 million bank guarantee from Malayan Banking Bhd to service the finance charges of the sukuk, he says.

On the refinancing of the sukuk, he says MRCB Southern Link will have to present stable traffic numbers to the banks in order to obtain a longer tenure financing. The company will need to have at least six months of traffic numbers before it can refinance the debts.

“We will need some time to refinance the debts. Refinancing usually takes about nine months to a year to be completed. Basically, there will be no defaults in 2015 as the sukuk will only mature end-2016 and end-2018,” Imran says.

“RAM Ratings come up with their ratings on a yearly basis. The question is, why downgrade now? We have explained to them very clearly, and one of the arguments was when we get the bank guarantee, cash will be released and there will be no default risk.”

However, according to Imran, MRCB has not decided whether to refinance the sukuk. This is something that has to be deliberated by the management and sukuk holders, he says. The traffic number, while still short of the monthly projection of 61,000, is growing.

“The numbers are on an upward trend, even after we started tolling. When Singapore increased the tolls on their side, it created a knee-jerk reaction. After that, we have been seeing growth again in traffic numbers.”

The EDL was constructed for about RM1.2 billion, including land cost, and without any government soft loan. When the expressway was completed back in 2012, the government announced that it would acquire the EDL and not impose any toll.

However, after conducting studies on the economics of acquiring the expressway or letting MRCB Lingkaran Selatan Sdn Bhd, a concession holder, to collect toll, the government opted for the latter.

According to Imran, the idea of tolling at the CIQ complex is to allow Malaysians to use the EDL for free when travelling in the state, as per the decision by the federal government.

There is only one toll plaza on the EDL at the CIQ complex, while motorists travelling in Johor can exit at the Bakar Batu interchange to get to Permas Jaya, Pasir Gudang and Jalan Tebrau. 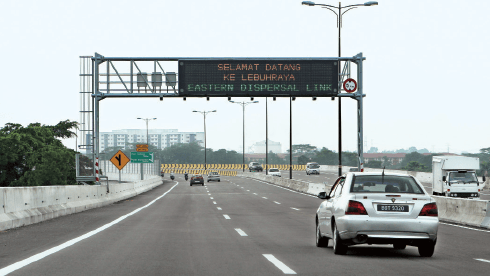