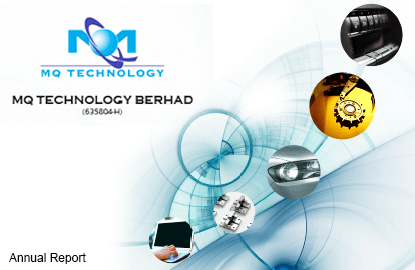 According to Bloomberg data, a block of 21.69 million shares representing a 15.5% stake was crossed at 4.5 sen a share in multiple transactions, for a total value of RM975,825.

Another 1.21 million shares or 0.95% stake were exchanged at five sen apiece through multiple transactions, for a total value of RM60,640.

Parties involved in the transaction were not immediately known.

Earlier, the company's largest shareholder, Goh Boon Soo, disposed of 17.5 million shares or a 12.54% stake in the company via off market between Dec 20 and Dec 22, trimming his stake to 61.29 million shares.

Based on the latest closing price of 4.5 sen, MQ Tech has a market value of RM20.74 million.

On Dec 13, the company announced it is embarking on an integrated casino resort project — which includes a casino, serviced apartments and theme park — in Cambodia, which carries a gross development value of US$51.1 million (RM225.58 million) over the next six years.

The deal came after the appointment of Robbie Hari Krishnan Tatparanandam, the nephew of tycoon T Ananda Krishnan, as the company's executive director on Dec 8.