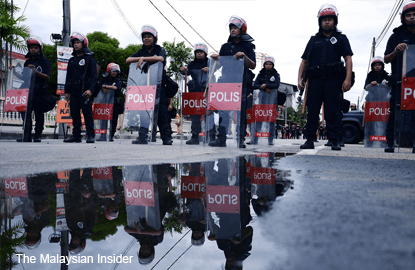 The council provides the power to declare an area a “security area” if there is deemed to be a threat.

In a security area, designated authorities including the army and the police are allowed to arrest or search any individual deemed a threat without a warrant.

The bill was tabled for first reading today.

Putrajaya hopes to pass the bill at the current meeting which ends  on Thursday, Dec 3.

The quorum for the council to meet is with five members. In the absence of Najib, Zahid will chair the council meetings.

The operations of the council will be headed by a director general appointed by Najib among public officers.

It has the powers to impose curfew and also issue directives to any government entities regarding security issues.

The bill also provided protection to the NSC, the director of operations or any member of the Security Forces or the personnel of other government entities from legal proceedings and suits for any action carried out in good faith in the course of their work.

However, prosecution for an offence can be instituted with the written consent, of the public prosecutor.

The council is inspired by the United Kingdom security council, which was set up deal with cyber security and other evolving security threats.

BN and Umno members have been demanding for a return of the Internal Security Act (ISA) and the EO since they were abolished.

Putrajaya had since introduced a couple of legislations that provided detention without trial, as provided by the ISA and EO. – The Malaysian Insider