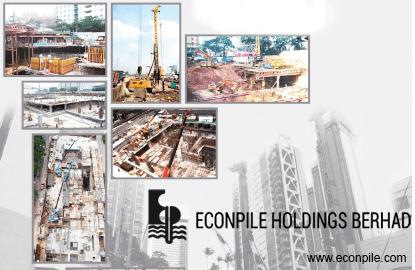 Econpile Bhd
(April 1, RM1.19)
Maintain buy and revise up target price to RM1.70 from RM1.56: Econpile Holdings Bhd has secured a piling contract for a hotel development project in Penang worth RM51.6 million.

Note that Econpile had previously completed the piling and basement works for the Setia SPICE’s convention centre. The development is a public-private partnership between S P Setia Bhd and the Penang Municipal Council to revamp the existing Penang Indoor Sports Arena.

The job will commence this month and is expected to be completed by June 2017 (duration: 15 months).

This will keep the group busy until early 2018.

For FY16 year-to-date, Econpile has secured RM365 million worth of new jobs, which exceed our previous replenishment target of RM320 million.

As we believe more contract wins could flow through in the fourth quarter of FY16 (4QFY16), we have raised our target to RM400 million.

Following our increased FY16 order book, Econpile’s FY16 to FY17 earnings have been raised by 9% to 13%.

We maintain our replenishment target of RM400 million for FY17.

Since its listing in mid-2014, Econpile has continued to deliver both earnings and job wins.

All in, we like the group for its strong track record as a leading piling specialist.