Moody's: Malaysia's medium-term goal of a balanced budget by 2020 is at risk 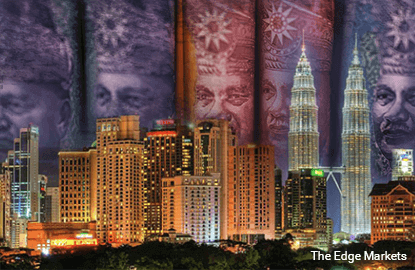 KUALA LUMPUR (Oct 25): Malaysia's medium-term goal of a balanced budget by 2020 is at risk due to fall in revenues, according to Moody's Investors Service.

In a statement yesterday, Moody's said Malaysia might face its narrowest half-year deficit since early 2011 after recording a RM32.8 billion deficit in the first half of 2016 (1H16).

"Over the first six months of 2016, a delay in dividend payments from Petroliam Nasional Bhd (Petronas) contributed to the large revenue shortfall, with the national oil company remitting only around 37.5% of a planned RM16 billion to the government.

"Other oil-related items, such as the Petroleum Income Tax and Petroleum Royalties, exerted significant downward pressure, due to weak global oil prices. Non-oil items, such as receipts from corporate and personal income taxes, also fell in year-on-year terms.

"As a result, it may be challenging for the government to meet its 3.1% of gross domestic product (GDP) fiscal deficit target for this year. In the first half, the federal government recorded a deficit of RM32.8 billion.

"To reach the full-year target of RM38.7 billion, that implies a second-half shortfall of only RM5.9 billion, which would mark the narrowest half-year deficit since early 2011," it said in a statement.

Moody's said Malaysia's medium-term goal of a balanced budget by 2020 is at risk due to decline in revenues, weakening of debt affordability and absence of major fiscal reforms despite credit-positive developments.

"The absence of bolder steps toward fiscal deficit reduction places at risk the government's goal of a balanced budget by 2020. Unlike in recent years when Prime Minister Datuk Seri Najib Razak announced a goods and services tax and the rationalisation of subsidies, there were no major new reforms to address Malaysia's underlying fiscal weaknesses," it said.

For 2017, revenue remains the binding constraint to providing further support to the economy, it said, noting that the government projects dividends from Petronas to drop to RM13 billion, which would contribute to a decline in revenue to 16.6% of GDP from a recent peak of 21.4% in 2012.

Meanwhile, Moody's said it expects the federal government's debt burden as a share of GDP to continue to climb and remain above the median for A-rated peers although its budgetary discipline was credit positive.

However, Malaysia's other aspects of the sovereign's fiscal profile continue to deteriorate, it said.

"The government projects a mild decline in direct government debt as RM21.9 billion (1.8% of GDP) of liabilities related to the Housing Loan Fund has been reclassified as a contingent liability. At 54.5% of GDP in 2015, Malaysia's debt burden including the reclassified debt is higher than the A-rated median of 41.5%, although lower than that of Iceland (A3 stable), Ireland (A3 positive), Israel (A1 stable), Japan (A1 stable) and Malta (A3 stable).

In 2015, only Sharjah (A3 stable) and Bermuda (A2 stable) among A-rated governments collected less revenue as a share of GDP than Malaysia, and by 2017, Bermuda's revenue would be higher than Malaysia's based on the latter's current budget assumptions.

"The consequently higher debt servicing costs have combined with falling revenue to weaken debt affordability. Currently, only Bermuda among A-rated countries has a larger ratio of interest payments as a share of revenue, and we expect the corresponding measure for Malaysia to surpass Bermuda in 2017," it said.