‘Money-laundering charges must fall as CBT charges not proven’ 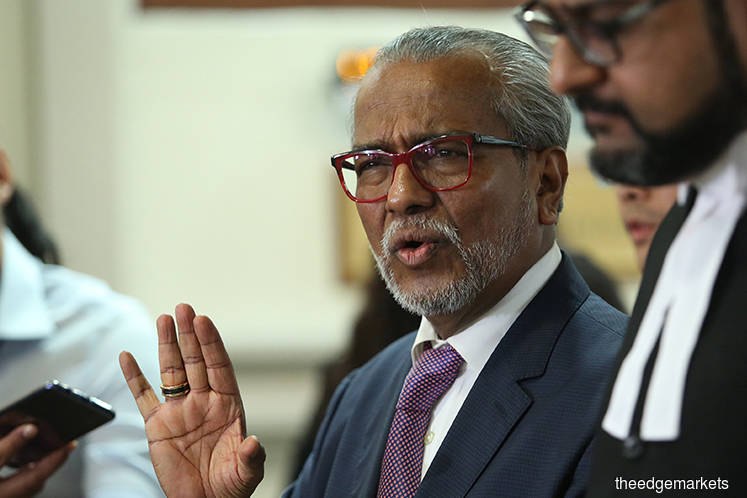 KUALA LUMPUR: The defence team in Datuk Seri Najib Razak’s SRC International Sdn Bhd trial argued yesterday that the prosecution must first prove that the former premier had indeed committed the three counts of criminal breach of trust (CBT) in order for the money-laundering charges to stand as the two offences are related.

Lead defence counsel Tan Sri Muhammad Shafee Abdullah argued that while a person can be charged under the Anti-Money Laundering, Anti-Terrorism Financing and Proceeds of Unlawful Activities Act 2001 (AMLATFPUA) without being charged for the predicate offence (CBT), that does not mean the prosecution is excused from proving the said offence.

Muhammad Shafee contended that as the prosecution has failed to prove that there was an element of misappropriation and dishonesty on Najib’s part to begin with, the CBT charges should also fall.

Drawing reference to the Indian Penal Code under Section 409 — which refers to CBT by a public servant, banker, merchant or agent — Muhammad Shafee argued that in order to complete the “offence”, apart from entrustment — which the defence contends there is none to begin with — the offender must misappropriate the funds.

By definition, Muhammad Shafee said misappropriation means that one takes possession of a property and act as if it is their own.

As such, to complete the last element of the CBT offence, the prosecution must prove that the accused received the money and intentionally retained it.

“My client does not have dominion of SRC because as the adviser, he cannot dispose of the assets of the company. He could not do anything about it,” he said.

“The prosecution should show that it is planned from the beginning several years in advance, that he [Najib] has his hand in it. Only then it completes the Section 409 (CBT) charge.

As such, Muhammad Shafee further argued that there was no offence committed by Najib within the AMLATFPUA charges, as the three predicate offences themselves cannot be proven.

“There is no offence of AMLATFPUA within the current charges. All the three AMLATFPUA charges should be dropped, it cannot sustain at all. This is over and above the argument that the three predicate offences themselves cannot be proven,” he stressed.

In response, appointed public prosecutor Datuk V Sithambaram said that the CBT and money-laundering charges relate to distinct offences which require different ingredients to prove the charges, and they do not make the charges bad.

“To the contrary, receipt is an ingredient of the offence of AMLATFPUA [money laundering]. Whether it is the same RM42 million is not a consideration as they are different ingredients,” he adds.

Sithambaram argued that the CBT offence is “complete” when there is a dishonest act in relation to the sum. “Receipt is not a necessary ingredient ... It is immaterial that no-one suffers any loss.”

“CBT is not an offence which counts loss from consequence of the act. It is the act itself that is the offence. The offence is complete the minute there is misappropriation,” he added.

In addition, Muhammad Shafee claimed that Najib is immune to the abuse of power charge under Section 23(4) of the Malaysian Anti-Corruption Commission Act 2009 (MACC Act) because Najib holds office as prime minister and finance minister for the government of Malaysia, which has control of SRC through the shareholding of Minister of Finance Inc.

To recap, Najib is charged with one count of abuse of power under the MACC Act, three counts of CBT under Section 409 of the Penal Code, and three counts of money laundering under AMLATFPUA.