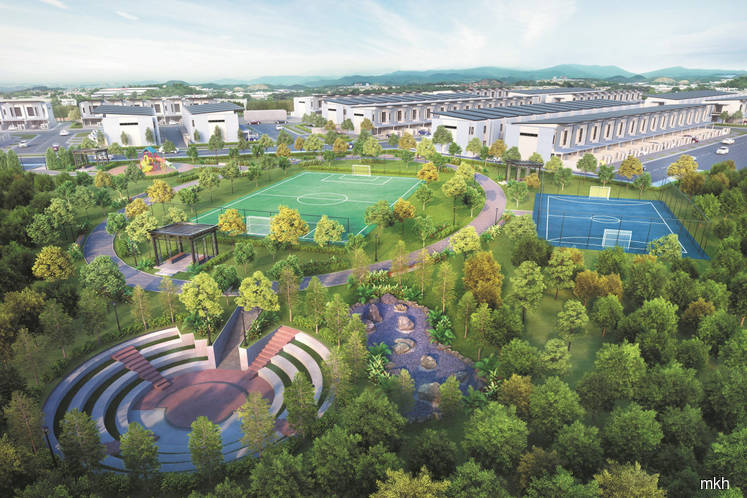 KAJANG: MKH Bhd will be launching the final precinct of its Kajang East township in Kajang, Selangor by the end of this year.

Precinct 1, which has a GDV of RM257 million, is possibly the “best” precinct in the 130-acre township as it is located on a hillside, MKH Bhd property director Datuk Chong Yong Han told EdgeProp.my. Precincts 2, 3 and 4 have been launched earlier.

“This kind of units are sought after because you can hardly find landed homes in Kajang now. The development is also easily accessible via highways such as the SILK Highway, LEKAS Highway, SKVE and Cheras-Kajang Expressway.

“We also provide a residents-exclusive community park with amenities such as an open amphitheatre, football field, futsal and badminton courts and a children’s playground,” Chong offered.

He added there is still some land left in Precinct 2 where more homes will be launched later on. Meanwhile, the group had also at end-August opened for registration Nexus @ Kajang Station. The serviced apartment project is located directly opposite the Kajang Mass Rapid Transit (MRT) station. The first block or Block A has been 58% taken up.

Nexus comprises three blocks in total – Block A, B and C. Block A is under PR1MA housing scheme while Block B and C are to be sold to Tenaga Nasional Bhd staff and the public respectively. Block A and B are joined, sharing the same facilities while Block C has its own private facilities. There are a total of 1,202 units across all blocks.

“So far, we have only opened Block A for sale. We are targeting to open Block C for sale by March next year. Block C units will be slightly higher priced than units in Block A.

“With the project so close to the Kajang MRT station, it will be very convenient for those who need to use public transport to go to work or to get around,” Chong said.

The group has successfully achieved the sales target of RM820 million for FY2018 and will be aiming for a 10% higher sales target for FY2019 ending September next year.

“We have already planned the launches for 2019. Among them are Boulevard 2 serviced apartments, landed homes in Kajang 2 as well as semidee shops at Hillpark Shah Alam. We are also in the midst of getting approvals for a project comprising 500 units of serviced apartments located next to the Taman Pertama MRT station in Kuala Lumpur which has an estimated GDV of RM250 million,” he said. — EdgeProp.my

This story first appeared in the EdgeProp.my pullout on Nov 23, 2018. You can access back issues here.